COMING out of a “rocky” period in 2020, Guyana managed to remain resilient against internal and external shocks in 2021, recording Gross Domestic Product (GDP) growth of 18.5 per cent, according to the Economic Commission for Latin America and the Caribbean (ECLAC) in its latest report titled, “Preliminary Overview of the Economies of Latin America and the Caribbean 2021.”

According to the report, the Latin America and Caribbean Region will see its pace of growth decelerate in 2022 to 2.1 per cent after reaching 6.2 per cent, on average, last year.

This slowdown, according to ECLAC, takes place in a context of significant asymmetries between developed, emerging and developing countries, with regard to the capacity to implement fiscal, social, monetary, and health and vaccination policies for a sustainable recovery from the crisis unleashed by the COVID-19 pandemic.

The report shows that the region is facing a very complex 2022: uncertainty regarding the pandemic’s ongoing evolution, a sharp deceleration in growth, continued low investment and productivity and a slow recovery in employment, the persistence of the social effects prompted by the crisis, reduced fiscal space, increased inflationary pressures and financial imbalances.

Guyana, however, is projected to withstand the impending challenges as a result of its burgeoning oil and gas sector and other lucrative productive sectors. The country, according to ECLAC, stands to record GDP growth of 46 per cent by the end of this year. 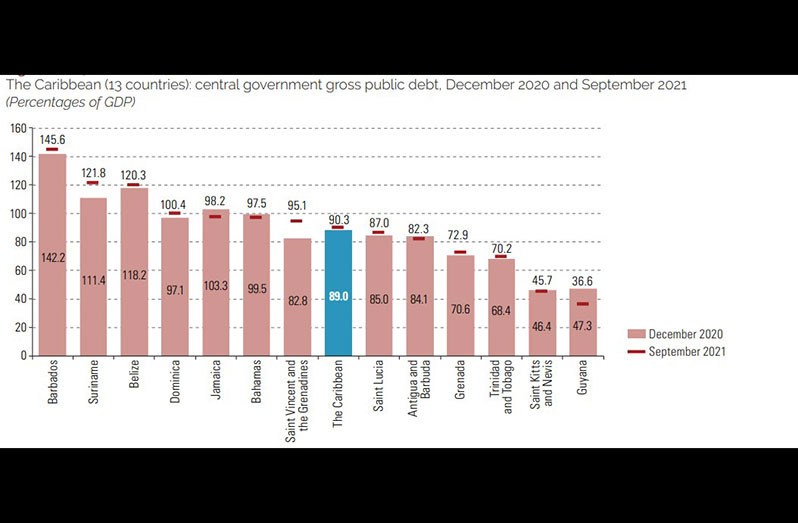 On Tuesday, the World Bank, in its Global Economic Prospects, reported that Guyana’s economy would grow by some 49.7 percent in 2022.

Responding to this latest projection, Senior Minister in the Office of the President with responsibility for Finance, Dr. Ashni Singh, said that this is a result of the work that the government has put into creating an investor friendly environment.

“We are pleased to see the positive revision in the World Bank’s outlook for Guyana. This is good news, but we are not surprised. This is in fact to be expected given our government’s strong policy stance as it relates to economic growth, to investment, to job creation and income generation for the benefit of all Guyanese,” Dr. Singh said.

He told the Department of Public Information (DPI) that the projection also reflects the continuous optimism in the Guyanese economy, not just by those of who are here in Guyana, but also by all those persons who are following economic developments in Guyana, including the international investment community and international agencies involved in the task of monitoring economic developments.

He recalled that when the People’s Progressive Party/Civic (PPP/C) was elected to office in August 2020, a lot of work had to be done to bring back investor confidence.

This was done, firstly, by keeping the population safe while containing the adverse consequences of the COVID-19 pandemic on economic activity, and which was combined with the political situation at the time.

He said there were several interventions aimed at stimulating economic activity, including injecting liquidity in the economy through the COVID-19 cash grant, reduction of taxes, and increased public expenditure in critical infrastructure projects.

“What we are seeing now is the result of measures and interventions such as this. It’s significant also that this outlook is being issued at a time when we are still grappling with the tail end of the effects of the severe and devastating floods that we had in 2021,” Dr. Singh related.

Similar to its response to the COVID-19 pandemic, was the government’s swift move to provide support to those affected by severe flooding last year, which is also expected to affect agricultural production in 2022. 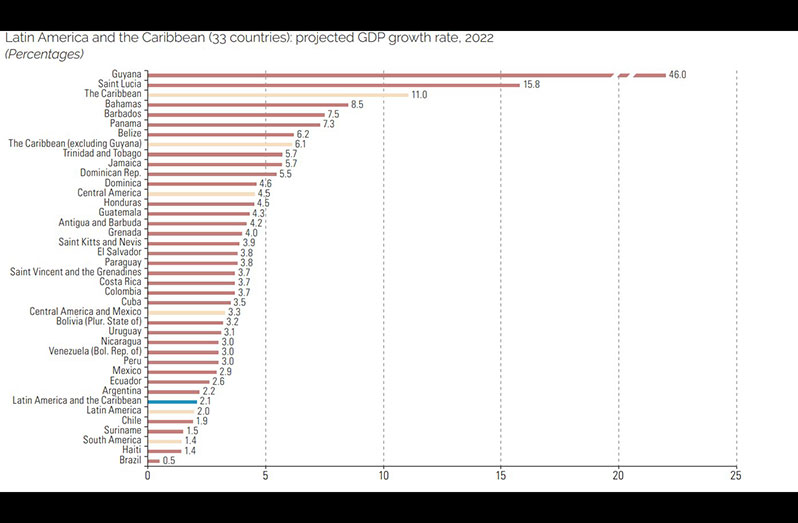 LACK OF CONFIDENCE
“Economic growth is all about confidence and during the 2015-2020 period, the then APNU+AFC Government had adopted an extremely hostile posture towards the private sector and towards private investment, and so during that five-year period we saw economic confidence, investor confidence at an all-time low,” Dr. Singh said.

Recognising the prevailing circumstances induced by the previous government’s actions, the incumbent took steps to correct this Guyana’s image.

“So, we sent those signals and we had to adopt a policy stance, in all that we did, that is conducive and supportive of private investment,” Dr. Singh said.

He also reflected on the interventions in the emergency budget of 2020 and the 2021 national budget which reduced land rental fees, taxes on construction materials, and removed corporate taxes on the health and education sectors, among others.

The government also promoted the non-oil economy, with the recent enactment of a local content legislation, which is aimed at ensuring that all Guyanese benefit from future development.

Dr. Singh added: “Bureaucracy was also a major issue that needed to be addressed as many companies couldn’t move because they had applications for permits and licences, and so were stuck in a bureaucratic quagmire and so we moved immediately to unlock those.”