ON THE NIGHT of August 1, 1976 policeman Guy Simmons walked into a gas station and claimed that if he was not sold two cold beers he would blow out the brains of the barman with his .38 revolver.
A bystander, Jerome Calder, who questioned the cop’s ability to commit any such offence with a toy gun, was shown the live bullets for the revolver. Like Doubting Thomas of biblical fame he was still doubting, when his head was blasted with a revolver bullet.
Following police investigations, P.C. Simmons was charged with murder but a mixed jury at the Demerara Assizes found him guilty of manslaughter and he was sentenced to three years imprisonment by the trial judge.

Dissatisfied with the sentence, Simmons appealed the conviction and sentence but the Court of Criminal Appeal, constituted by Chancellor Victor Crane and Justices of Appeal, R. H. Luckhoo and Dhan Jhappan, dismissed the appeal and affirmed the conviction and sentence.
The accused was charged with the murder of the deceased but he was convicted of manslaughter, the jury having rejected his defence of an accident, viz, that he took out his revolver to get some money to pay for the beers and as he was putting it back, the gun accidentally went off.

At the trial the jury was correctly directed on the degree of negligence which the prosecution had to discharge in order to bring home a conviction of manslaughter, but were not told that when dealing with the issue of accident that the onus was on the prosecution to negative the defence accident.
The Court of Appeal held (I) that notwithstanding there was a lapse on the judge’s part , the circumstances recounted by the prosecution witnesses were compatible and reconcilable with the evidence of a ballistic expert as to the pressure needed to cock and discharge the gun , and also with the pathologist evidence as to the position of the bullet wound on the deceased.

(ii) that the proviso will be applied because the post mortem evidence negative the defence of accident and was so overwhelming as inevitably to lead a reasonable jury properly directed, to the same conclusion of guilt.
The Appeal was dismissed and the conviction and sentence affirmed.
Representing the appellant at the appeal was Attorney-at-law, Mr. J. A. Patterson.
Mr. Loris Ganpatsingh, Assistant Director of Public Prosecutions, Acting, represented the State.

Delivering the judgment of the Court of Appeal, Justice of Appeal, R. H. Luckhoo said that on the appellant’s behalf a number of grounds were argued, but the only one which qualified for, and merited consideration, was ground 3 (a) of his amended grounds of appeal in which he complained that the learned trial judge “failed to tell the jury that the onus of disproving the defence of accident rests on the prosecution”. That the trial judge did not in any part of his summing-up use the words: “The onus of disproving the defence of accident rests on the prosecution “cannot be disputed. Let us therefore examine the setting of the facts of the case and relate, as we must, the directions given to that setting. Only in this way can we determine whether or not this ground is to succeed. In doing so we gave recognition to the fact that no two judges have the same style, manner and arrangement of a summing-up before a jury. Indeed very often the same judge must, by virtue of the way in which particular cases are presented, vary the style and arrangement of the summing-up in those cases in order to effectively assist the jury in appreciating the issues set before them.

What was the State’s case against the appellant? It rested on the evidence of persons present at the scene of the discharge of a .38 police service revolver. On the evidence of Eustace Kendall an expert in the use and functioning of firearms, including the type of revolver in question , and on the evidence of Edward Simon, a senior Government Bacteriologist and Pathologist. Undisputed were the following facts: that the discharge at the Gas Station, Vlissengen Road, Georgetown, at a bar where beer and other drinks were sold, and to which the public had access, that at the bar and within close proximity were several persons including the deceased Calder and the appellant. There was also no dispute that the appellant had the revolver in his possession at the time of its discharge and, that Calder died from a bullet wound through the right temple inflicted by a bullet discharged from the same revolver.

Winston Oudkerk’s version of how the incident took place was in substance this: He said that the accused came up to the bar and in a normal tone of voice said to the barman: “Bring two beers or I blow your f….. brains out. “With that he took out a small gun from his pocket. Calder said to him that it was a toy gun, whereupon the accused took out the bullet from the magazine of the gun and said to the deceased that, “this is a real f… bullet. “
The accused then replaced the bullet into the magazine and back into the gun. Calder insisted it was a toy gun. The witness then heard a loud explosion. The deceased slumped forward, spun around and fell on his back.

Lennox Nestor’s version was that the accused came up to the bar and requested two cold beers and heard the barman saying there were no cold beers. The accused, Nestor said, responded, “Well, if I can’t get a cold beer I’ll shoot one of you.” Calder then asked, “What you gon shoot with, your mouth?” The accused took a revolver from his pocket and showed it around and said “With this,” as he held it up. He then placed the revolver back into his pocket. Calder then said: “It is a toy pistol,” whereupon the accused took out the revolver again, opened it, took out a bullet held it up in the air and said “Is this still a toy pistol”.
The accused then put the bullet back into the revolver and replaced it into his pocket but Calder insisted it was a toy pistol. The witness then saw the revolver in the hand of the accused for a third time and this was followed by an explosion .He did not see the deceased bending down before the explosion. After the explosion he saw the accused lying on the ground.

The accused asked the witness Nestor what he was doing at the Gas Station and on being told that he was waiting for change, accused told him, “Collect it fast and split the joint”.
The Court of Appeal dismissed the appeal and affirmed the conviction and sentence. 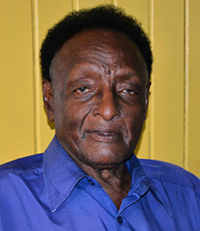 George Barclay
New, modern detention facility to be constructed at Lusignan
Remdesivir drug showing positive signs in treatment of COVID-19
Not again
CSEC pass rate up, CAPE down
‘Slushy’ road a big burden on Canal Number One farmers
View All