IN light of the recent landslide at Poker Street, Wismar, in Region 10 (Upper Demerara-Berbice), Prime Minister Brigadier (Ret’d) Mark Phillips paid the community a visit on Saturday.
The Guyana Chronicle understands that having assessed the situation, the Prime Minister then spoke with those residents who were affected by the mishap.

He was also informed that the private contractor responsible for the accident has made a commitment to rebuild the houses that were damaged due to the excavation work he was conducting in the community when the landslide occurred.

Prime Minister Phillips spoke with regional officials, who informed him that they are working with contractors and other individuals to clear the rubble from the area so that power could be restored to the community by the end of this week.

The Prime Minister also seized the opportunity to meet with other residents of the community besides those affected by the incident.
In a telephone interview with the Guyana Chronicle, Regional Executive Officer for Region Ten, Dwight John expressed his gratitude for the Prime Minister’s intervention, saying: “For me, personally and also the residents of the community, the Prime Minister’s visit is well appreciated. It is commendable that he has taken the time off to come to Linden to make sure that the residents who were affected by this tragedy are being looked after, and will be looked after.”

As he went on to say, “His concern as a government official and as a father and a husband is well appreciated in the community. He also spoke with other residents in the area who were not affected by the event, but he called on them, too.

“We are all family here in this area, and we should look out for each other. And that is one of the things that the Prime Minister tried to instill in the people when he met with them; that we have to look after each other.”

According to John, the regional administration is committed to assisting those residents who were affected by the landslide in “getting back on their feet in the shortest possible time.” 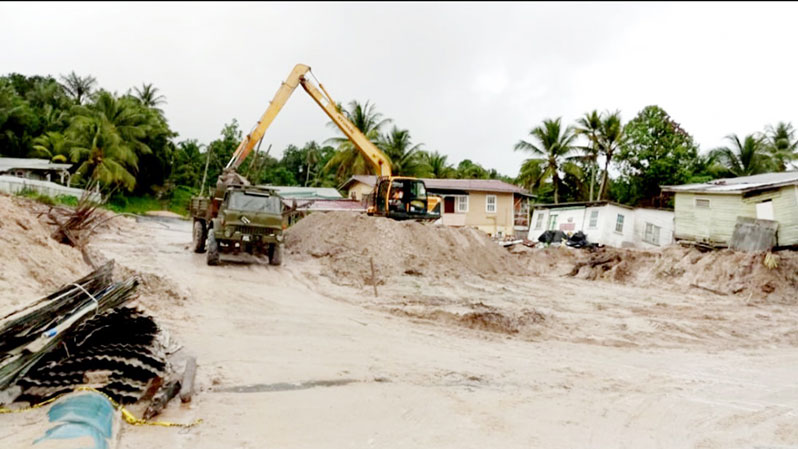 The REO said, too, that Symon Harry, the private contractor at the centre of the mishap has given his assurance to the Prime Minister, himself and the individuals who are affected that he will ensure that their houses are rebuilt.

Dwight also noted that the Guyana Power and Light (GPL) is waiting for the roads to be cleared so that they can commence planting the new utility posts. He wanted the people who are affected by the lack of electricity to know that it will be restored by the upcoming week.

The REO also reassured the public that those who lost their homes are safe, and staying with other relatives until theirs are rebuilt.