BRANDING is an important element of any business. An entity’s brand strategically communicates its identity. With an aim to empower women-owned businesses to strengthen their brand identities, the Women Entrepreneur Network of the Caribbean (Guyana Chapter) is focusing on women and the rebranding of their businesses.

At a recently held event, women entrepreneurs were encouraged that rebranding and relaunching themselves are critical to their sustenance in the business world.
According to immediate past President of WENC, Junette Sturat, who spoke to the Pepperpot Magazine recently, the trajectory of WENC moving forward to ensure that local businesses, particularly small businesses, can begin their ascension to the top. 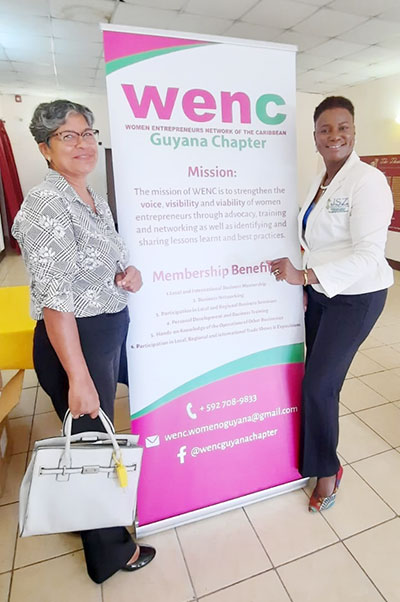 “WENC is at a stage where we are dealing with rebranding. We are dealing with membership, mentorship and projects- projects in the sense that we are helping these business organisations to move forward,” she explained. “Our next event is on the 19th of December, where we will have a financial analysis, which will catapult our members in the next direction by hosting a session on financing your business.”

Additionally, she remarked that while the organisation primarily operates out of the United States, it should be able to suit the Guyanese society.
Sturat was quite concerned that one of the major issues facing entrepreneurs right now is the support to grow their businesses.

“ You can take a loan from the bank or a family member loaning you some money if you don’t have the support and drive and the capacity. It is all about capacity. We must be able to build entrepreneurs to the level where they fully understand their role in business,” she explained.

Back in 2013, when the group was established, it was realised that women had played a significant role in the economic and social development of Guyana, therefore, it was important for them to be afforded adequate economic space in the society.

According to the immediate past President, WENC’s main interest is to boost support and drive entrepreneurs in our society.
Meanwhile, a young entrepreneur who goes by the name of “Freedom,” spoke to the Pepperpot Magazine about the need to be creative in the business world and use that to support oneself financially, thus following your passion and dream.

“I never like being the same. I always believed in being different and creative and seeing beauty in unique things. I grew up as a child with that concept. I was at one of my friend’s events, and we were looking for traditional wedding presents, but I didn’t like what I saw, so I decided, why not create something different and people loved my creation and the passion ignited from then on,” “Freedom” told the Pepperpot Magazine.

The entrepreneur is of the view that women and their entrepreneurial businesses are one of the ways that additional finances can be garnered. It can be used as a means of supporting oneself, while at the same time following your dreams and passions.
“I say that from a personal perspective, where my Mom stayed at home with us and did massage, so she did these things at home, she had that side income to assist where assistance would be needed,” she said.

She also urged that even if you have to challenge yourself by speaking to your creative work and reminding it that it was meant to bring an income, do so, but, again urged that whatever you do, don’t give up on your dream and passion.

WENC Guyana will now align itself with strategic organisations and influential persons who can aid in meeting the needs of its members, according to the immediate past president.