By Francis Quamina Farrier
Time does fly, and yesterday, September 11, 2021 was 20 years since the horrific tragedy of 9/11 in New York City in which–among the hundreds killed — 23 Guyanese perished when terrorists hijacked two commercial airplanes and crashed them into the World Trade Center Twin Towers in lower Manhattan, New York City. Another Guyanese lost his life when another hijacked plane was crashed into the Pentagon in Virginia. With that number of victims and with the small population of Guyana, our country actually lost the highest number of citizens per capita. The total number of victims that day was officially recorded as 2,977. The percentage of Guyana’s loss on that fateful day is something most Guyanese are unaware of, and certainly most of the rest of the world. Sister Commonwealth country, Canada, also lost 24 citizens as Guyana did in that horrific incident; however, Canada had a population of 31 million at the time of the 9/11 terrorist attacks, while Guyana had a population of only about 740,000.

Arriving in the USA just four days after the tragedy, I got a first-hand feel of the tragedy and how Americans — especially Guyanese-Americans — were affected by the worst tragedy in modern history, with the loss of so many lives, including their fellow Guyanese who were all going about their law-abiding activities on that day.

The Sunday immediately after the tragedy, I was present at a memorial gathering at a private home where fellow Guyanese sang hymns and said prayers for those who were killed in the terrorist attacks on America. Members of the gathering were all still in a state of semi-shock and trying to make sense of what had happened and the deaths of Guyanese, who were innocent victims. A few days later, I attended another memorial service which was organised by the Guyana Consulate in New York, and which was attended by hundreds of Guyanese mourners and their American friends. 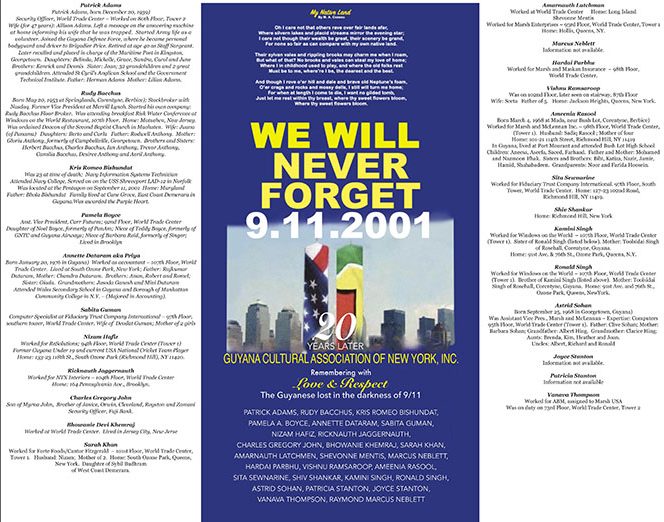 That terrorism tragedy brought a dramatic change in aviation security which has since become tighter and tighter over the years. It is the general view that flying still remains the safest means of travel. People with evil intentions to sabotage and bring down aircraft from the skies now find it virtually impossible. There is now extremely tight security around aeroplanes that are about to take off on flights and those parked on the ground and in hangars. International, as well as national flights in all countries, are now carefully monitored by well-trained security personnel. Here in Guyana, passengers on domestic flights are also checked to some extent by security to ensure that there is no security issue posed by any passenger. All airline companies keep the tragedy of 9/11 foremost in their security plans and operations. Passengers are routinely checked for offensive weapons and other banned items and substances from getting on to aircraft which are about to take to the skies.

Since this is the 20th anniversary of 9/11, one can assume that a fairly high percentage of the present Guyana population was yet unborn when the tragedy occurred back in 2001. As such, it would be interesting to know what are they being told of that tragic event and how they feel about the high price Guyana paid in terms of lives lost. As already established, Guyanese can be found in all corners of the world; from countries such as Australia and New Zealand in the far south-east, and Japan and Thailand in the north-east. Derrick John Jeffrey is a Guyanese who has been resident in Thailand for over 15 years. Originally a member of staff of the History and Arts Council in Georgetown, he later joined the United Nations Headquarters in New York as a staffer. On his retirement, he travelled with his Thai wife to Thailand where he wrote a novel entitled “East River” which is a story about international espionage. Some years later, his wife passed away and Jeffrey decided to remain in Thailand, a country which he says is similar to Guyana in terms of the variety of fruits that are grown there and which enjoys a similar weather pattern as Guyana. With more modern and reliable means of communication Guyanese keep in touch with each other regularly. We share our daily experiences with other Guyanese all the time.

It is also well established that for the better part most Guyanese give of their very best wherever they are in foreign countries. They make sterling contributions in every field of human endeavour, including construction. As such, it is no surprise to know that Guyanese were among the construction workers of the World Trade Center Twin Towers. I met two of them some years ago and interviewed them for VCT Evening News television here in Guyana. Twenty years since 9/11, the scars remain on many hearts of those who have lost loved ones. Guyana as a nation, and so many other nations around the globe, also bear the scars of 9/11 some 20 years later. The cry by many is “We will never forget.”