By Dillon Goring
As women worldwide continue to celebrate their achievements, it has become evident that more women are venturing into worlds that were predominately occupied by men.

Recently, Pepperpot Magazine sat down with one of Guyana’s Female Sports Photojournalist Jemima Holmes to talk about her life and her career.
Jemima who is currently at the Guyana Times Newspaper told the Pepperpot Magazine of the many times she felt like giving up and quitting but nevertheless will preserve to shine in her distinguished career.

“I think it is intimidating because you have all these men around, honestly most of them don’t think that I know what I am doing because of the misconception that women don’t know anything about sports, as a result, there is the mindset that you may need some extra help, so it is definitely intimidating at times because people tend to downplay you, so it is a work in progress,”Holmes said. 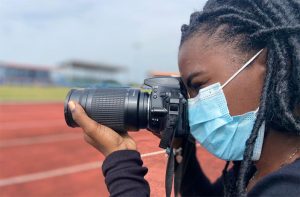 Holmes feels that because of her presence in the workforce, she is definitely not the one to be taken advantage of just because she is the lone female in the group.
“If there is any situation to make me feel like I am being taken advantage of, without being disrespectful in any way, I would definitely express my feelings on a matter,” she said.

Holmes expressed some great moments on the job as well as some moments when she felt like giving up and quitting altogether.
She vividly remembers one time when Guyana won the CPL Finals, which was held in the country. For her, those were great moments of joy and jubilation.

But, she also remembers moments of frustration when writing stories and they didn’t make it for the final to be published in the newspapers.
When it comes to meeting the challenge of the profession, Holmes told Pepperpot Magazine that it is always a competition, which is the nature of the job but that she always wants to be and do her best.

“So when I became employed, taking pictures wasn’t what I wanted to do, but I soon realised that Sports isn’t given priority when as a journalist, a photographer is assigned to you.But nevertheless, I adjusted quickly and did my thing. I am not where I want to be, but I am getting better at it, as time progress,” Holmes disclosed.

Holmes challenges young journalists, who have now entered the profession or have plans to enter the profession to be creative, there is no right and wrong way to write sports.

“ There are rules to every game, but whatever is your perception of what you witness at the game is really important, because that is what makes you different from any other reporter because your readers get a different perspective of what actually went on at the game,” Holmes.

The young Sports Photojournalist explained that she received great support from her parents since she is from a cricketing household and therefore maintaining the balance between work and family is manageable but hard sometimes since you have got to leave for work when the family is spending time with each other.
Jemima has some of her colleagues in the field for inspiration, those include Avinash Ramzan, Akeem Greene, and she talked a lot about her love for the game and having the ability to be creative in her writing as her inspiration to propel her in her career.
Plans for the Future

In every career, there is room for upward mobility, and photojournalism is in no way different.
Jemima told Pepperpot Magazine, that she has plans to become an announcer in the field of Sports and thus will continue to stay with the profession for a long time.

“I want to be able to relate to the common man, what you are seeing from an analytical perspective, thus using language that anyone can relate to because women don’t have that many opportunities, so any woman that is in the field, doing stuff that the men do is really interesting to me,” Holmes related to the Magazine.

She explained the reason for the switch is because writing has its challenges and at times, it is not challenging, but according to her it is not something that she would completely walk away from, hence she sees it as a way to challenge herself more.

The Sports Photojournalist told Pepperpot Magazine that she wants to be remembered as a person who is confident and excellent at what they do.
Jemima wants to advocate for the respect of Women across the world stage, whether they are professional in the field of their choice but more particularly in the areas that are dominated by men.

Dillon Goring
Guyana stands with St. Vincent, Barbados
Largest shipment of COVID-19 vaccines arrives in Guyana
Brighter days ahead
Champagne village gets Internet for first time
Cuba has a new leader and it’s not a Castro
View All