HE National Agricultural Research and Extension Institute (NAREI) is currently conducting trials of Irish potatoes on three farms — two at Little Biaboo and one at Dora. The intention is to ascertain communities in which potatoes could be grown and the conditions necessary for a successful harvest.

Irish potato is a high-demand commodity in Guyana because of its consumption preferences. According to the National Bureau of Statistics, in the year 2017 alone Guyana imported approximately 11.5 tons of Irish potato costing an average of US $3.5 million.

NAREI’s Chief Executive Officer Mr. Jagnarine Singh noted that the institute has initiated and commenced various initiatives in its strategic plan, a programme of import substitution i.e., to reduce food-import costs by at least 20 percent annually.

Thus far, several varieties of Irish potato were screened for production capabilities under Guyana’s agro-ecological conditions. It was proven that some varieties performed well, with quality compared to that of international standard. We are also working with our international partners to continue the screening of more tropical varieties.
The environmental condition set to a specific variety determines that crop yield within its genetic limits. Therefore, a combination of environmental factors and cultivars can result in production differences. Crop-screening for adaptation to a new environment before dispatching for large-scale production is important. 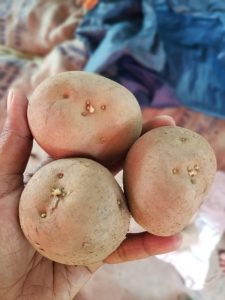 Thus far, three farmers’ plots have been selected to conduct trials based on strict criteria and are expected to expand as more seed materials become available.
* Little Biaboo, Upper Mahaica River- Field visits and assessments were done on two half-acre plots in the area to ascertain whether the conditions (soil type, irrigation & drainage) were present. This area was reselected to conduct trials since it had proven to be the most successful in previous trials done by PROPEL. Two farmers: Mirzaad Persaud and Chetram Ramdass were selected since their farms met the requirements needed.

* Dora, Soesdyke-Linden Highway- Field visit and assessment were done on a half-acre plot to ascertain the suitability for cultivation. The farmer, Haresh Tiwari, had previously expressed his interest in trialling Irish potatoes on his farm as a means of intercropping his avocados.

Little Biaboo: Both plots were ploughed using a tractor equipped with a disc plough and harrow to at least 30cm (1ft) dept. Limestone was incorporated based on soil-test recommendations during these operations. A garden tiller was then used to refine the soil structure and to aid in the creation of ridges and furrows, 75-90cm (30-36in) centre to centre.
Dora: The plot was cleared and levelled using a bulldozer. A garden tiller was then used to establish ridges and furrows the limestone was broadcasted and incorporated in the soil.

Seed preparation:
The seeds were removed from cold storage and transported to the farms in preparation for sprouting. They were placed in a cool, dry area protected from the elements but exposed to sunlight. They will be left to sprout until three to four strong, green sprouts (1.25cm (1/2in tall)) were observed.

Establishing irrigation:
Little Biaboo: sprinkler tubes were supplied to the farmers based on the dimensions of the farms. The farmers both provided pumps and the needed PVC pipes to set up the irrigation systems. Water is being accessed from the irrigation drain running parallel to the plots.
Dora: All the needed irrigation equipment was provided by NAREI. The water had to be moved from a creek approximately 1000 ft from the trial plot via a water pump and PVC pipes for irrigation. Sprinkler tubes were placed along the beds and connected with PVC pipes.

Planting:
Approximately 1000lbs of seeds (20 bags of 25kg weight) were sprouted for each plot. Whole-seed potatoes were used for planting to reduce the likelihood of bacterial infection. Seeds were placed along the furrow at 30cm (12in) spacing, giving a population of approximately (7,000- 8,000 plants for the half-acre). The seeds were assessed for sprout development before planting.

The Spunta and Kennebec varieties were sown first on both plots at Little Biaboo and the Granola one week after because of the level of sprout development. All of the varieties were planted at the same time at Dora.

Staff Reporter
Guyana stands with St. Vincent, Barbados
Largest shipment of COVID-19 vaccines arrives in Guyana
Brighter days ahead
Champagne village gets Internet for first time
Cuba has a new leader and it’s not a Castro
View All