COMPARISONS with ideas are necessary and more possible now, than back then, say 30 years ago, today, with the current
overpowering presence of at times conflicting information flowing in, provided through various channels of media and though questionable, with diligence we can find answers. Back then, without the available tools, books, articles or radio programmes to inform us, to establish authenticity in time to avoid serious errors of judgement on medical conditions, therefore, exaggerated lore and imagination supplemented. If you’re over 50 then you would be aware that there was a belief system that went along with the observation of deformed children among wealthy families: it was presumed that they had to sell a child to sustain the wealth they had acquired. With the same predicament afflicting poor folk it was defined as an attempted abortion or family rituals set in place by ancestors not adhered to, that resulted in punishment. Years later, we would read with alarming attention the onslaught of the devastating drug Thalidomide, marketed across the world as a wonder drug for pregnant mothers (1950s) that mutated foetuses that were birthed without legs or arms. This sophisticated wonder drug was later discovered to be created and marketed by people with Nazi concentration camp affiliations. But who can for certain determine that other such pharmaceutical products have not reached the market with similar results? Also ,it took a long time to recognise that the construction of the favourite asbestos that was also used as an intercepting plate used between the pot and the flame, especially in cooking cook-up rice, was a conduit for cancer. The citizens more likely to be lured to subscribe to the purchases of wwell-marketed pharmaceutical poisons were the better half of society. Ideas, such as conflicting blood groups impacting on births or the benefits of basic exercises at all were not popular. A rounded, overweight person was regarded as “looking good,” simply because most working-class homes did practise strict food management; thus, we-they always had ‘hat stands’ peeping out as visible ‘collar bones’ were called. There wasn’t at the table a variety of food types, what helped was that low-budget folk did lots of walking to burn out overindulgence of starchy foods, plus our culture of ‘Bush medicine,’ real fruit juices and fruits, and we did play in school, contributed to toughening us up;
we had indeed come so far, and can reflect, but? 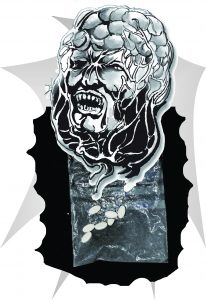 However, instead of society smoothly evolving from ignorance to light, invasive impediments stepped in and settled to dim whatever awareness of light was visible. Drug addiction, with protected drug blocks with all kinds of intimidating connections, have become part of the accepted landscape, while the civil society and the usual stakeholders remained silent over the past 36 odd years. Bad as that is, it doesn’t stop there: addiction to prescription narcotics is a lesser but still an ‘evil’ that drug abuse has led to addiction and can seriously alter activity in bodily conduct and disposition by affecting increased activation of dopamine receptors in the brain is proven. Addiction is regarded as “a complex psychological and social phenomenon that requires psychological and social treatment” and the added conclusion is that “the disease is at its core, biological: changes that a physical substance [drug] causes in vulnerable body tissue [brain].” –Eric J. Nestler., M.D., PhD Science & Practice perspectives-Dec. 2005. Because research isn’t movie magic and while ‘the grass grows, the cows go hungry’ in respect to addiction, the definition is stated by Narcotics Anonymous; Sixth Edition 2008-“Compulsion- once having started the process with one fix, one pill, or one drink we cannot stop through our own power of will. Because of our physical sensitivity to drugs, we are completely in the grip of a destructive power greater than ourselves. When at the end of the road we find that we can no longer function as a human being, either with or without drugs, we all face the dilemma. What is there left to do? There seems to be this alternative: either go on as best we can to the bitter ends-jails, institutions or death-or find a new way to live. For the first time in man’s history, a simple way has been proving itself in the lives of many addicts. It is available to us all. This is a simple spiritual-not religious-programme, known as Narcotics Anonymous.” Abbreviated: N-A or its principles, which are yet to be established through Law and Custom of principle practice, on our turf, has proven itself effective and is a good reading source for columnists (I have a few in mind). Somehow addicts find it difficult to sleep during withdrawal, and they seek over the counter and prescription sleeping aids, that are acquired illegally. For those still residing with family, regardless of how confused and agitated their condition seems, they must be told, and resisted by those close to them in their appeal for contraband, non prescribed sleeping aids, because these shelf items can be hazardous, to quote 2014 & 2016 Consumer Reports magazines that cite the danger of overdosing on the drug Acetaminophen, found in both Tylenol and Nyquil, though effective within recommended dosages, can be toxic with dependency overdoses, causing Liver failure, this is just one of the lists mentioned. Ambien can induce awareness blackouts, some sleeping pills are known to come with a hangover, and an accident the next morning can be traced to impaired coordination that is a follow-over from a sleeping aid last night. We have the medical personnel, people must know we can’t lose people because they can afford to innocently buy danger, or because they just don’t know of the threat. In 2021, the challenges of the old days have morphed and are still with us.