LAST Phagwah, both the COVID-19 pandemic and Guyana’s election epidemic placed a significant strain on the country’s development. The latter reopened wounds that, for decades, had not been allowed to heal sufficiently. This Phagwah, while we are (mostly) indoors, away from the COVID super-spreaders, we are confronted with the opportunity to learn and grow as a people.

A few years ago, when I was still a baby reporter, I recall capturing a photograph of the former President David Granger and the current Attorney-General (AG) and Minister of Legal Affairs Anil Nandlall S.C., at the Indian High Commission’s Holi Day (Phagwah) celebrations. From a two-dimensional point of view, considering the composition of the photo, there was nothing spectacular about it; it was just a photo of the former President and the AG spreading the coloured Phagwah powder on each other’s faces. Yet, it was a photo that my former Editor-in-Chief (EiC) emphasised that I should include with my article.

Then, I did not fully appreciate the significance of the photograph. Sure, I understood that it was a nice, light moment between the former President and the current AG — both men who have been on opposing sides of the local political spectrum. But the illustration of celebrating each other’s culture — despite political and even ethnic differences — as part of the Guyanese identity escaped me then.

In this space, before now, I’ve written about how easy it is to adopt the ‘colourblind’ mentality and try to erase the inherent differences in the hope of achieving a fundamentally misconstrued notion of ‘oneness.’ We should never aspire to repudiate race or ethnicity, but, instead recognise that we each contributed, in some way or the other, to forge our nation. And we each have a role to play in the continued efforts to develop our nation. 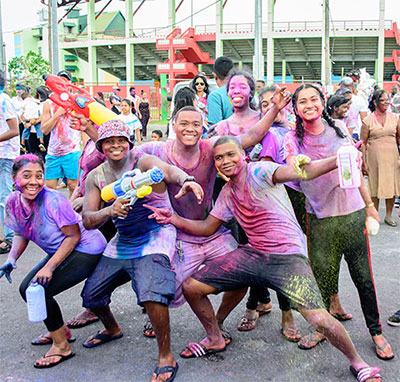 I think the reasoning guiding my former EiC’s emphasis on that photograph is the same reasoning that guided my current EiC’s emphasis on illustrating political unity and solidarity in matters of national development, such as in Guyana’s case before the International Court of Justice (ICJ) on the border controversy with Venezuela. Despite political differences, there are fundamental things that we must, as we say colloquially, ‘hold one head’ on.

There are still destructive perceptions that permeate our interactions with each other, resulting from political occurrences of the past and leading to an ingrained sense of mistrust among races and ethnicities, due to the tribal politics we have. There is also the intersection of class and gender that informs our respective outlooks.

A year has passed and I don’t think that we have not made significant gains in fostering the elusive goal of national unity and harmony. Another Phagwah has come around and we have to ask ourselves if the jolly good time we have dousing each other with coloured water is enough ‘unity’ and ‘harmony’ for us. If it isn’t — and it certainly isn’t enough for me — our quest must be to understand what harmful perceptions exist, how our political landscape influences those perceptions, and how we can work on interrogating these. In short, that quest must be undergirded by efforts to acknowledge and celebrate our differences and not let them be a source of division.

Despite my belief that significant gains have not been made, there have been attempts to create a better country for future generations. The University of Guyana (UG), for example, has begun a pragmatic approach geared at improving racial and ethnic relations through education.

Following an unfortunate occurrence happening right on campus, the university crafted a ‘Human Relations’ course, expected to help students navigate ethnicity, race, and culture in Guyana, but also includes entrepreneurship, emotional intelligence, the history of Guyana, the geography of Guyana, and etiquette.

The data or perception studies, are collected through pre-tests on the attitudes and behaviours of individuals before engaging the course content. Then, asking the same questions afterwards helps to illustrate how education has helped to shift negative, destructive stereotypes and beliefs.

Last week, in observance of the International Day against Racism, UG also offered the course to members of the general public, free of cost. Though I had planned to, I was unable to sign up for this course. I imagine, however, that UG would be able to gather much-needed information from a wider cross-section of Guyana, as opposed to just its members. And this information could inform other interventions either from UG or otherwise.

UG has stepped up and shown that Guyana’s national university, like all stakeholders, has an integral role to play in the interrogation of our mistrust of each other and in helping us to foster healthier interactions with each other.

If you would like to discuss this column or any of my previous writings, please feel free to contact me via email: vish14ragobeer@gmail.com

Vishani Ragobeer
Frontera plugs US$19M into CGX
Guyana called ‘Good Samaritan’ as supplies reach St. Vincent
Local trade not impacted by volcanic eruptions
‘I am stronger than my trials’
Over 79,000 vaccinated against COVID-19
View All