FROM looking at this gentleman you could not know who he is, because he is often dressed as a farmer and is always up at the crack of dawn gardening or doing chores.

He is Hanoman Nanram, called ‘Uncle Joe,’ a retired enforcement officer of the Guyana Revenue Authority (GRA) who was responsible for hauling in more than 40 smuggled boats with contraband from Manchester village to Moleson Creek. Back in those days, he was regarded as passionate when it came to his work.

Nanram was a high achiever as an officer at GRA and he was awarded for his work and retired after spending 21 years and was indeed a star employee.

He was a watermelon farmer, who had a 10-acre plot at #63 Beach area, back in the days and from that he managed to build his house.

Today, Nanram is 70 years old and is very active in his garden where he cultivates pak choi, calalloo, boulanger, married man pork, celery, peppers, eschallot and fine leaf thyme among other vegetables.

Nanram uses the old discarded fridges found around the village to make nurseries for his garden and would also walk about and collect cow manure for his plant beds.

He is a local of the community and a respected elder, who came from the grassroots and worked his way up.

Nanram benefitted from a government scholarship in 1974 and went to study political science in Russia, then after nine months he returned and got married.

He, however, started working at the Skeldon Estate in 1976 to 1988 and in 1985 he bought the land on which he currently resides and erected a house after garnering some money from planting and selling watermelons.

While Nanram was employed at the, GRA he established a park in front his houseb where he outfitted with solar lights, swings, see-saw, slides, basketball hoops, a Benab for picnics, tables and chairs for villagers to have a place to relax.

Nanram also installed a library with hundreds of books which were donated by his friends who reside overseas.

The place is utilised by locals and visitors for picnics and it has a place where people can play dominoes and even cook with an outdoor fireside and pots.

The park even has a parking lot for those with vehicles and it is quite cosy and a good place to be and everything is free of cost here.

The library is for everyone and you can borrow a book to read, but must return it.
Yesteryear
Nanram told the Pepperpot Magazine that in the black and white days the place had a lot of rum shops to accommodate the farmers after a hard day of work and they would indulge in drinks then go home. 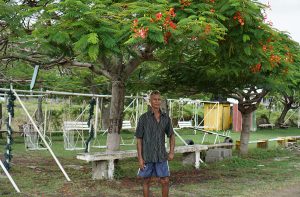 He reported that at #63 they had a large benab on the roadside and weary travellers with donkey carts and horse-drawn carts used to spend the night before making their way to the Skeldon Market #79 Village.

Nanram stated that #64 Babylon Village is a good place to live, because it is safe and crime-free and the people know each other and live like a large extended family.

“There are a few youths using drugs and misbehaving a bit but we don’t have any out-of-control happenings here,” he said.

Nanram added that over time, a lot of people died and many others migrated leaving their houses and he would take care of some of the empty houses for the owners, who are overseas.

He disclosed that within the village there are about 100 empty houses, whose owners are abroad.

The father of one stated that his grandson, 24, resides with him and he would walk in the community selling the greens from his garden.

Nanram’s wife passed away three years ago and although there is a void, he would stay busy to keep his mind active.

Annually, Nanram would organise a party for the children in the community and would ensure there is enough to eat and drink, after which the group would get a bag of goodies and toys to take home.

The venture is a partnership with some friends both locally and overseas, but this year the goodies and toys will be delivered to the children’s homes since, as a result of the pandemic, there will be no gathering.

Nanram’s grandson, Mahadeo Mallay is a bird lover and he has more than 20 caged birds at their house.

Even the strays would go to Uncle Joe’s yard to be rescued and he would never turn anyone away. His home is open to people even for a cool beverage or some water.

Back in the days, Nanram was a political candidate for the People’s Progressive Party (PPP) and that was in 1992 and he enjoyed his political career then.

He used to play cricket and volleyball, but these days the elder would spend a lot of hours in his garden and he seems content that way.