THE Kanuku Mountains, one of the stunning mountain ranges of the Rupununi Savannahs, has, for centuries, played an invaluable role in the conservation of the region’s biodiversity; and remains the ‘Mountains of Life’ to traditional Macushi and Wapishan communities that inhabit its surrounding environs. This week we will take a closer look at the Kanuku Mountains Protected Area (KMPA), focusing on its history and, natural and human wellbeing values which were reasons for it being protected for present and future generations.

The Kanuku Mountains are located in Region Nine (Upper Takutu – Upper Essequibo), the southwestern region of Guyana, one of the most ecologically diverse areas of the country. The mountains are approximately 100 km east to west and 50 km north to south and are divided by the Rupununi River into Western and Eastern Kanukus. At approximately 611,000 ha, the KMPA is equivalent to 11 per cent of Region Nine and 2.8 per cent of the total land area of Guyana. The mountains are flanked by Indigenous communities, some of which share common boundaries with the protected area. The town of Lethem, which is the administrative centre of Region Nine, is located some 24 km away.

The Kanuku Mountains and the associated savannahs are relatively intact and extremely rich in biological diversity. Approximately 70 per cent of mammal, 53 per cent of bird, and 26 per cent of plant species recorded in Guyana are found here. It is of note that the KMPA has the second highest bat diversity (89 species) of any protected area in the world, and that of the 25 bird species considered to be endemic to the Guiana Shield, 17 are found in the Kanukus. The high overall biodiversity of the region is supported by an unusually diverse array of habitats, which range from savannah, gallery forests and semi-deciduous forests in the lowlands, to lowland and montane evergreen forests in the foot hills and mountains. The Kanuku Mountains are also remarkable for harbouring healthy populations of many species that are listed on the IUCN red list of threatened species. These include, but are not limited to, the Giant River Otter (Pteronura brasiliensis), Harpy Eagle (Harpia harpyja), Jaguar (Panthera onca), Giant Anteater (Myrmecophaga tridactyla), Giant Armadillo (Pridontes maximus), Lowland Tapir (Tapirus terrestris), Giant River Turtle (Podocnemis expansa), Black Caiman (Melanosuchus niger), and Arapaima (Arapaima gigas) – the largest Neotropical freshwater fish.

There are approximately 16,000 residents in about 60 Amerindian communities located in Region Nine. Twenty-one of these communities are within close proximity of the Kanuku Mountains and depend on its resources for their livelihoods. Three of the nine main Amerindian groups present in Guyana exist in Region Nine. Two of these groups (Macushi and Wapishana) are known to populate areas around the Kanukus. The Macushi people are of Carib descent and occupy areas on the northern side of the Mountains, while the Wapishana, an Arawak people, are located mainly on the southern side of the mountains. Some communities, however, have mixed populations of Macushi and Wapishana as well as small pockets of other ethnic groups.

The population of the region has increased over recent decades and efforts to propel economic development have been afoot. With increased population, there has been increased pressures on the Kanuku Mountains and their resources. This includes unsustainable hunting and trapping of wildlife, unsustainable fishing and logging practices, forest clearance, and illegal mining inside the protected area, as well as mining upstream in the headwaters of the Rewa and Kwitaro Rivers which are already negatively impacting on water quality and ecosystem health. At a larger scale, other foreseeable pressures on the KMPA include the Linden – Lethem highway that is on the cards to be built and will undoubtedly result in increased access to the region and as a consequence, potentially increase resource exploitation and influence cultural change. While tourism is a viable option for income generation for the communities and the management of the Protected Area, improperly managed tourist access to the area can lead to significant destruction and disturbance of habitats and cultural sites. Moreover, while the establishment of a protected area is a positive step towards mitigation of climate change, it is recognised that climate change has the potential to place pressure on the achievement of the goals of the KMPA. Changes have already been noted with the area experiencing shorter, more intense rainy seasons and hotter temperatures during the dry seasons. This phenomenon, if prolonged, can lead to changes in water quality, loss of biodiversity, low crop productivity and consequently a greater demand for land and other resources from the KMPA.

THE APPROACH TO CONSERVATION 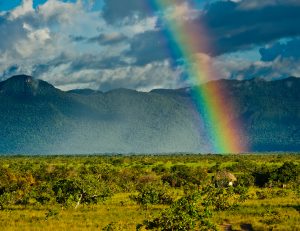 The value to the Kanuku Mountains in conserving Guyana’s natural and cultural heritage, more so, their importance in the lives of the Indigenous communities who depend on their resources, qualified the Kanuku Mountains as one of five priority sites for protection identified in 1999. Efforts to achieve that goal, for the benefit of the present and future generations have been advanced since then. In early 2000 – 2002, Conservation International – Guyana (CI – Guyana), identified as the lead agency to help move forward the process toward official declaration, conducted community consultations with eighteen (18) villages and carried out Community Resource Evaluations to determine what and how resources were used. This led to the establishment of the Kanuku Mountains Community Representative Group (KMCRG) in 2007, which continues to represent the interest of the communities in protected area management and decision making, and promote overall community development.

Some of the villages benefitted from livelihood projects such as cattle ranching in Katoka which was funded by the German Development Bank (KfW) funded Guyana Protected Areas System Phase I project through the Government of Guyana and implemented by the Environmental Protection Agency – the agency previously responsible for advancing the protected areas agenda. As momentum grew for protected areas management from the government, as well as from some of the main stakeholder communities, the proposed KMPA boundaries were delineated in 2007. In 2008, CI – Guyana again led community consultations to develop a draft Management Plan, in preparation for the official declaration of the protected area, which occurred in 2011 with the passing of the Protected Areas Act.

So began the journey of official protected areas management in Guyana, driven by the newly-established Protected Areas Commission (PAC) which was mandated under the Protected Areas Act with responsibility for managing, maintaining, promoting and expanding the National Protected Areas System

The Kanuku Mountains Protected Area is managed in accordance with the IUCN category VI classification: managed resource protected area. This means that the Protected Area (PA) will be managed to provide natural products and services to meet local needs while also protecting natural ecosystems and maintaining ecosystem services. KMPA, like all other currently existing national protected areas in Guyana, was assigned to category VI since it has a long history of local Amerindian communities carrying out sustainable small-scale livelihood activities with minimum impact on nature such as traditional fishing, gathering of timber and non-timber forest products, and subsistence hunting. Under the Protected Areas Act, Indigenous communities are allowed to continue with these activities.

KMPA management strategies are guided by the KMPA Management Plan 2016- 2021, which has, as identified by key stakeholders, five programme areas: operations and management; sustainable land and resource use; benefit sharing and livelihood development; education and awareness and capacity building. Activities under this plan have been funded by the Government of Guyana, and national and international donors such as the Protected Areas Trust Fund (PATF), and Frankfurt Zoological Society (FZS) and German Development Bank (KfW) respectively. The management structure comprises the Protected Areas Commission, which is governed by a board. A Site Level Committee is being setup, which will function in an advisory capacity to support site-level activities, promote the interests of stakeholders and advise the Protected Areas Commission on the effective management of the KMPA. At the site level, the PAC has employed a strong ranger team from the local communities which comprises of a Senior Ranger and five rangers. This number is expected to increase.

The PAC is committed to working with stakeholders at the national and local levels to manage the Kanuku Mountains Protected Area so that it remains the ‘Mountains of Life’ to serve this generation and generations to come.

In future articles, we will delve into some of our key achievements in KMPA Management, challenges and threats faced, as well as an outlook for the future of the KMPA.