THIS fortnightly column produced by the Protected Areas Commission (PAC) is aimed at sensitising and educating the general population about Guyana’s National Protected Areas System (NPAS) and the work of the PAC which has the mandate of managing, maintaining, promoting and expanding the NPAS.

We are in the sea turtle nesting season so we take the opportunity in today’s article to briefly introduce to the public one of our country’s protected areas: Shell Beach Protected Area (SBPA) which is part of our National Protected Areas System. More detailed articles about the NPAS including SBPA and its many unique plant and animal species will be published in the future. It is our hope that all of Guyana will value and have a sense of pride in our protected areas, our natural heritage – part of what makes Guyana so beautiful.

Located in the Barima-Waini Region (Region One) the Shell Beach Protected Area (SBPA) is the only coastal protected area in Guyana’s National Protected Area System. It has the longest stretch of mangroves, is rich in biodiversity and is well known as a nesting site for four species of Sea Turtle: the Leather Back (Dermochelys Coriacea), Hawksbill (Eretmochelys imbricata), Olive Ridley (Lepidochelys olivacea), and Green turtle (Chelonia mydas). These turtles nest between February and August of each year. 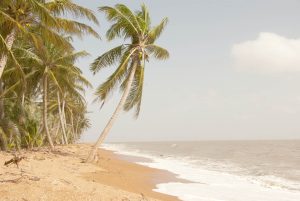 The beach is said to have gotten its name because it is made up of shells – fragments of mollusks, bivalved, and univalved shells. These characteristics make the SBPA an important part of the National Protected Areas System (NPAS) and potentially an excellent tourism site.

According to data obtained from research for the SBPA Management Plan, animal types include 28 reptilian species, 13 amphibian, 27 mammalian, and 27 macro-invertebrate species. Over 200 species of both coastal and migratory birds were recorded, giving the area significant potential for bird watching – an emerging tourism activity.

The human population in and around Shell Beach Protected Area is also extremely important. This includes eight Amerindian titled communities and three Community Development Councils (CDCs). Titled communities include Three Brother’s, Warapoka, Santa Cruz, Kwebanna, Assakata, Santa Rosa, Waramuri, and Manawarin. The residents of these communities basically live off the land in the form of subsistence farming, fishing, hunting, crabbing, timber harvesting and more. This is how they feed themselves and families and they often times sell to others within the community to further make a living. The residents of these communities serve as somewhat guardians and protectors; they contribute significantly to one of the PAC’s mandates which is to protect cultural and biological diversity for future generations. Some of them are employed as rangers during the turtle nesting season to help monitor and protect the turtles coming up on the beach. 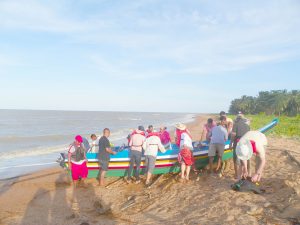 This local population can also be considered as part of the key stakeholder component to ensure the preservation and development of the protected area. The Management plan states specifically that the overarching goals for Shell Beach Protected Area are to protect and conserve biodiversity, sustain and maintain the rich cultural heritage of SBPA associated Amerindian communities; and promote sustainable livelihoods opportunities within local communities – all of which are continued and ongoing measures.

The PAC has ensured that outside of the Sea Turtle season at Shell Beach, Rangers carry out community engagement activities. These activities are aimed at education and awareness – residents of those communities are taught about the importance of the protected area which is also their home; and how they can contribute to the conservation of resources and species. These residents are always receptive and cooperative as they are fully aware that failure to protect the area could result in their own detriment as they are the immediate beneficiaries. Additionally, research and surveys are carried out by rangers to continuously monitor resource activities.

The Protected Areas Commission through its management programmes, will continue to support training and various community development and livelihood activities, including resource use by communities at levels that are considered to be sustainable.