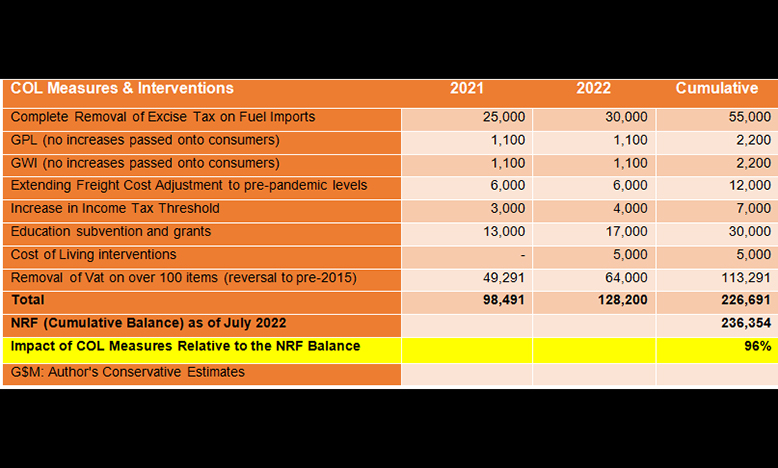 REBUILDING THE ECONOMY FROM FIVE YEARS OF POOR ECONOMIC MANAGEMENT AND BAD POLICIES
Proponents of the notion that the mid-year report confirms that the Dutch disease is already here by merely citing the contracted performance of a few subsectors, namely sugar and rice, and ignoring completely the positive outturns in all the other subsectors, have failed to present any empirical evidence and context to corroborate this argument. The empirical evidence, however, strongly contradicts this notion and therefore disproves the perception or argument that the Dutch disease is present.

Having said that, analogically speaking, it is easy to destroy something but it’s difficult to build something: a building, for instance, that took months to construct can be destroyed in a matter of minutes. Imagine a country that took more than two decades to build and recover from a bankrupt state and almost 100 per cent poverty, it took just five years of bad economic management and policies to reverse two decades of hard work. With this perspective in mind, it is noteworthy to highlight that it took just over two decades to lift this economy out of bankruptcy and move it from a GDP of about US$200 million in 1992 to a GDP of US$4 billion and per capita income of less than US$200 to US$5,000 by the end of 2014.

In 2015, the previous Government inherited $100 billion liquid cash in the bank, foreign reserves of US$595 million representing five months’ worth of import cover and all the sectors were experiencing resilient performance.

To substantiate the foregoing viewpoints, the data in the graphs and tables below adequately illustrate the empirical evidence to corroborate these aforesaid contentions. 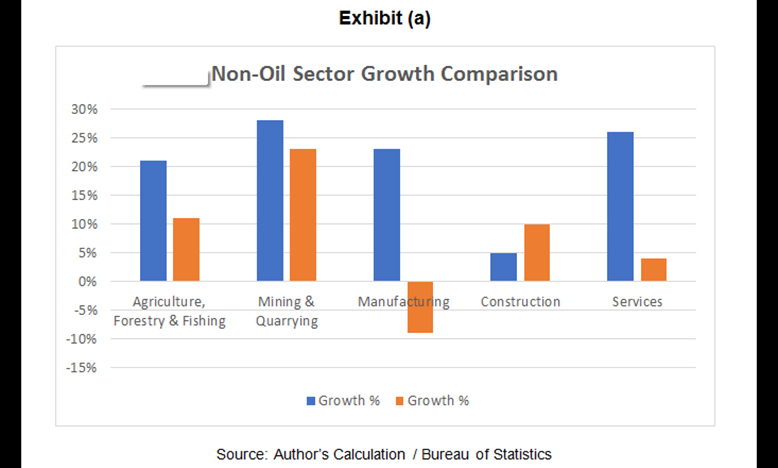 The above graph tells the obvious. As can be seen, the major non-oil sectors, agriculture, forestry and fishing, mining, and quarrying, manufacturing, and the services sector, recorded stronger growth during the period 2009 – 2014 compared to the period 2015 – 2020.
Exhibit (b) 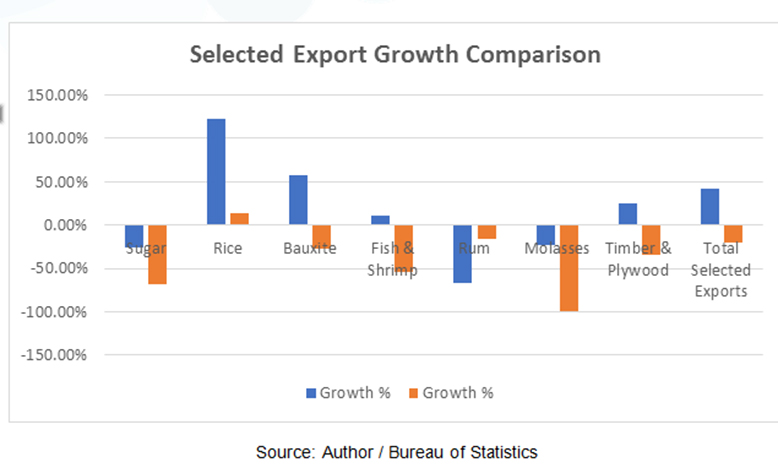 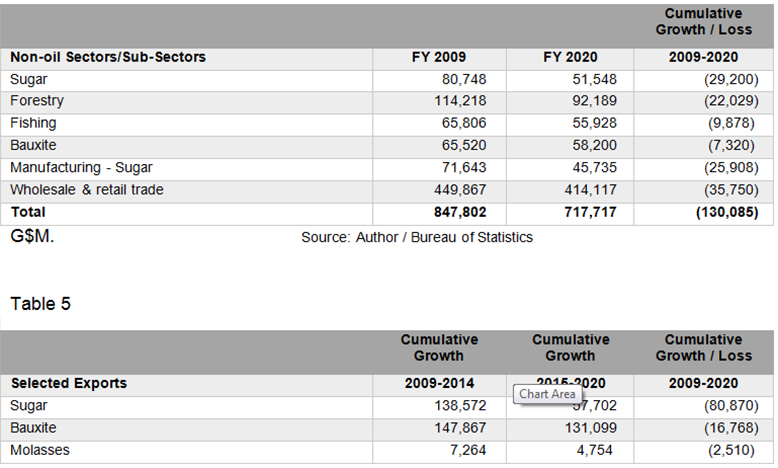 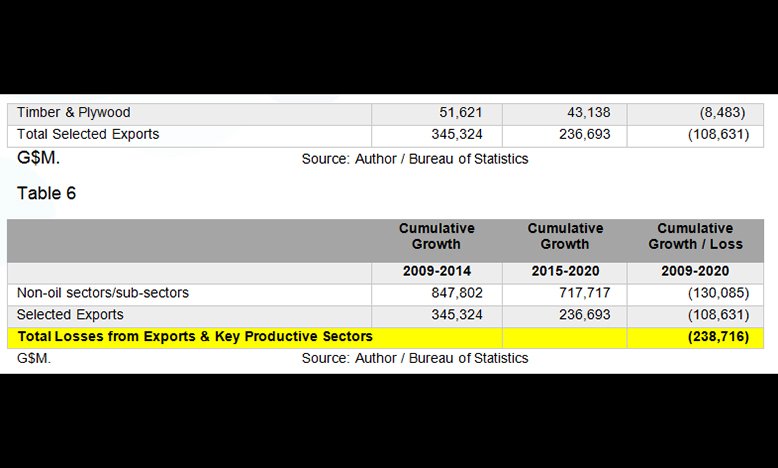 Tables 4 – 6 above illustrate the cumulative loss from the selected export commodities as well as the cumulative loss in productive output for a number of selected productive sectors of the economy. Altogether, the sugar, forestry, fishing, bauxite, manufacturing and wholesale and retail trade sectors and subsectors together with the cumulative loss of export earnings as previously highlighted, amounted to a whopping $238.7 billion or US$1.14 billion. Put differently, under the stewardship of the previous Administration, a number of key productive sectors and export earning commodities declined by US$1.14 billion cumulatively. This amount represents 36 per cent of the total stock of public debt, 1.5 times the foreign reserves in the Bank of Guyana and almost one year or more share of oil revenues. 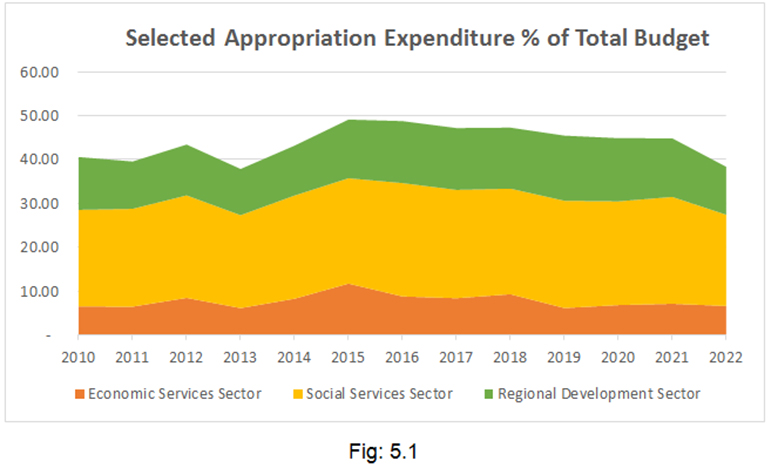 Of note, the budgetary allocations towards the economic sectors in 2010 through 2012 increased by 39 per cent in 2010, seven per cent in 2011 and 48 per cent in 2012. In 2013, allocation towards the economic sectors decreased for the first time during this period by 13.45 per cent then increased to 37 per cent in 2014. One would recall that the reason for this is that in 2011 – 2014 the Political Opposition had a one-seat majority in the National Assembly and, as a result, in 2013 used their one-seat majority to institute budgetary cuts. This tendency continued in other budgets during this period which ultimately led to snap elections in 2015. 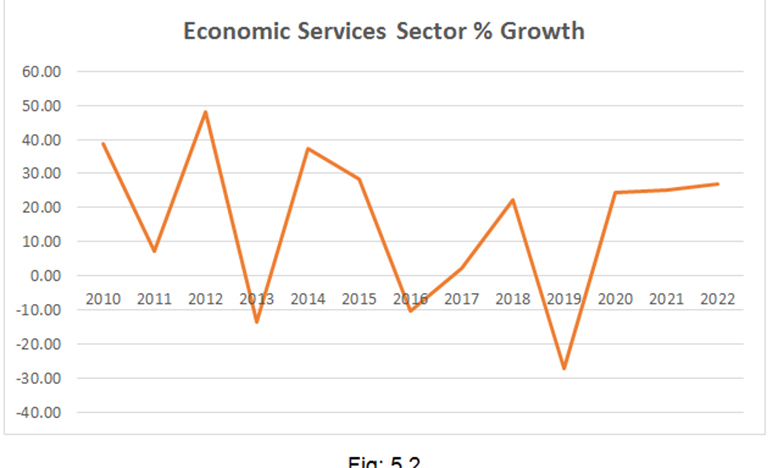 CONCLUSION
The analysis contained herein revealed largely the task at hand for the Government of the day to rebuild the economy to where it was pre-2015. After so doing, this will then set the stage to pursue the advance level or the “next level” wave of development.

With respect to the mid-year report for the first half of FY 2022, the economic performance reported therein is demonstrative of the positive outcome of the economic policies, timely interventions, the allocation of financial resources towards infrastructure development, economic diversification, and transformational development projects implemented through the national budgets of 2020, 2021 and 2022.

Finally, while the Dutch disease is not present in any form on account of the Government’s strong commitment to tangibly rebuild the traditional productive sectors, and the advancement of an ambitious economic diversification programme through improved national competitiveness, viz-à-viz, cheaper energy, the regional food and energy security agenda etc., the economic path that the economy previously came out of under the previous Administration during 2015 – 2020, would have most certainly induced the Dutch disease syndrome and the natural resource curse as evidently demonstrated in the findings and analyses of this report.