THE part the cinemas played in shaping the imagination of most young Guyanese is unbelievable, especially when, in the seventies, we began to see the late Sidney Poitier as Mr. Tibbs, the smart, elegant detective as an Afro-Caribbean American standing his ground. Before that, we saw Woody Strode in ‘Spartacus’, and in ‘The Ten Commandments’ as the Pharaoh of Kush; then Paul Robeson in ‘Show Boat’ and ‘The Emperor Jones’.
The latter, which I saw on TV a few years ago, featured a mere sprinkling of non-white talent in cinema back then. But unprecedented diversity was to hit the screen in the early 70s with the appearance on the screen of the ‘One-Armed Swordsman’, introducing an incredible star that became known to all and sundry as Wang Yu.
Born Wang Zhengquan on June 6, 1944 in Shanghai, China, legend has it that before joining the Hong Kong-based Shaw Brothers Studio back in 1963, Jimmy Wang Yu, as he was widely known in cinematic circles, once served in the National Revolutionary Army, and was also a swimming champion in Hong Kong at one time, as well as a racing-car enthusiast.
To us here in Guyana, he was the first leading Chinese star on a platform and backdrop that was fresh terrain; that of China. It may not have been China really, but that is what we saw.
I’m not sure; was it Globe or Metropole? I think it was Globe, because it was at the Globe Cinema that the Soul singer King Floyd kissed a Guyanese girl in a green dress at his show, so Globe became stuck in my mind. That’s a big girl now, because I’m talking 1970/71 and the under-aged youths that witnessed it are grandfathers now. When Wang Yu came on the scene, The Spaghetti Western was king, with that different pistol sound, no clean checkered shirts, rustic clothing and mood. For that period, the Italians did eclipse the Hollywood western, much to our liking.

A REAL MAN’S MOVIE
A classic was ‘The Good, The Bad and The Ugly’. Rated the ideal man’s movie, and seen many times by male moviegoers, in this drama, though Clint Eastwood was the star, it was Eli Wallach’s character, ‘Tuco’, that stole the show, according to the male Guyanese vote. I took my now wife to see the incredible ‘double’ at Strand Cinema. On entering, she irritably observed the 90 per cent male population in the ‘House’ section and enquired, “Is whuh showing?” I pointedly ignored the question, held her hand, and pointed to two spare seats. By the time we were comfortable, the movie had begun. The ‘double’ was, ‘For a Few Dollars More’ (I think). Thus, cinema was the medium that inspired larger-than-life ideas and roots comparisons. It wasn’t by chance that Metropole, on the corner of Robb and Wellington Streets, was called 110th Street or ‘One-Ten Street’, mimicking the top-action, bad-boy movie with Anthony Quinn and Yaphet Kotto in ‘Across 110th Street’. 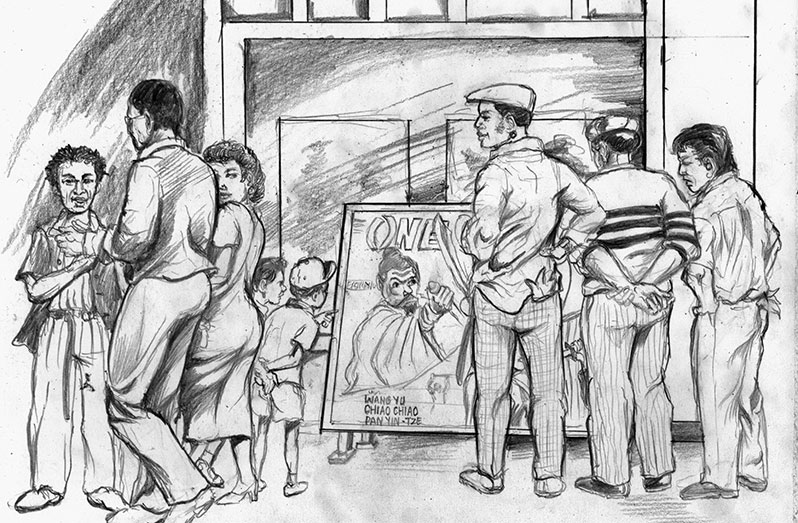 Wang Yu’s ‘One-Armed Swordsman’ heralded acceptance of a category of Chinese movies (described as such because those movies, at the time, were not produced in China) that introduced Bruce Lee and many others into the hearts and minds of movie-goers in Guyana, and brought the interest of martial arts to the common man.
Not that there were no martial arts schools here. The late Lenny Braithwaite on Laing Avenue, West Ruimveldt; Frank Woon-A-Tai, Keith DaCosta, Max Massiah etc., have always existed.
But the extreme potential in the dramatised action scenes piqued the imagination of Guyanese who have always witnessed and admired our own ‘street fighters’. It wasn’t martial arts, but boxing that had inspired our local street fighters. Fighting was an honourable way of settling disputes. The gun culture came with drugs, categorised as “cowards in a car shooting and driving away from a man they can’t stand up to physically”.
The martial arts films also reached the subliminal weapons of the Georgetown and rural streets for over 200 years. Swords vs cutlasses, staffs vs knock wood, broken bottles with cutting edges, knives etc. But most of all, the boxing agility of the martial artist’s punch and fly-kick that the film-star James Coburn had brought to the screen in the action comedy movie, ‘Our Man Flint’ was captivating. I was still in short pants and pondering this type of seemingly practical foot movement.
What the Wang Yu era introduced to viewers was the concept of action movies outside of Hollywood that were convincing. For the first time, we came to recognise China, not as the supervillain Chinese character Dr. Fu Manchu, played by the late incredible British actor, Christopher Lee, among other actors. It paved the way, possibly, for China to follow the inevitable Hong Kong movie-making that produced the impressive movie, ‘Crouching Tiger, Hidden Dragon’ a complete winner. And, judging from the exceptional box-office returns of ‘Shanghai Noon’, starring Jackie Chan, Owen Wilson and Lucy Liu, the game was on.

Sadly, Jimmy Wang Yu died recently, on April 5, 2022, at the ripe old age of 79, reportedly after a brief illness.
However, there is a ‘China Film Group Corporation’. I think its debut is a movie I haven’t seen as yet, ‘The Wandering Earth’. I’ve not watched it, but its trailer is exciting. No doubt Wang Yu’s memory to me and others will serve to inspire when we see Jet Li do his thing, that he, too, is part of the era of the legendary ‘One-Armed Swordsman’. It must make aspiring film-makers in Guyana realise that one dreams best when awake.