IN an edition of Vanity Fair Magazine, in the PROUST QUESTIONNAIRE, Sidney Poitier was asked, “When you die, what would you like to come back as?” he replied, “I don’t want to come back. What for?” It was an answer that enveloped the man and the age in which he lived. A remarkable answer from a man if you did not know him, or his achievements would certainly cause one to question, why did he say that?

The movie technology was initiated into primitive existence by a vaudeville actor named ‘Fred Nott’ in 1893, and the public responded with amusement. The then elite of the Science world,Thomas Edison and his peers felt that it would soon wear off as a novelty. They were wrong-see ‘Author Knight’ Film Historian. The novelty of the new technology soon provided other options. One must remember that from westerns and interpretations of the classics came another genre that was not mere nostalgia but was rooted in the ugly notions of racism. David Wark Griffith was described as a master of the set, but he was more than that. He also had a racist leaning, as his movie “ THE BIRTH OF A NATION” in 1915 did usher on the screen an absence and twist of the Afro- American presence. Later films would remove Africans and add Black Faces, as Al Johnson in the Jazz singer, as well as extras who acted as American Indians were all white. There were exceptions like Little Shirley Temple and Bill (Bojangles) Robinson in 1935, though sadly, as the ballad Mr Bojangles would sadly describe, Bojangles did not end with the good life. But it was in the pathway of Paul Robeson, actor and singer in the movie ’SHOWBOAT’ outstanding for his achievement on theatre in 1945, the prototype of the actor-activist, that all others came to define true self. Paul Robeson, too, faced vicious treachery and isolation — Robeson-1898-1976. The stage was one of struggle and many have contributed to the changing mood. Some white actors and producers helped to initiate change subtly. In this world of conflict, Sydney Poitier was determined to ply his skill. We cannot elaborate on the challenges he endeavoured towards reaching his goals, but we can measure his achievements and understand the Herculean trials he had to endure. 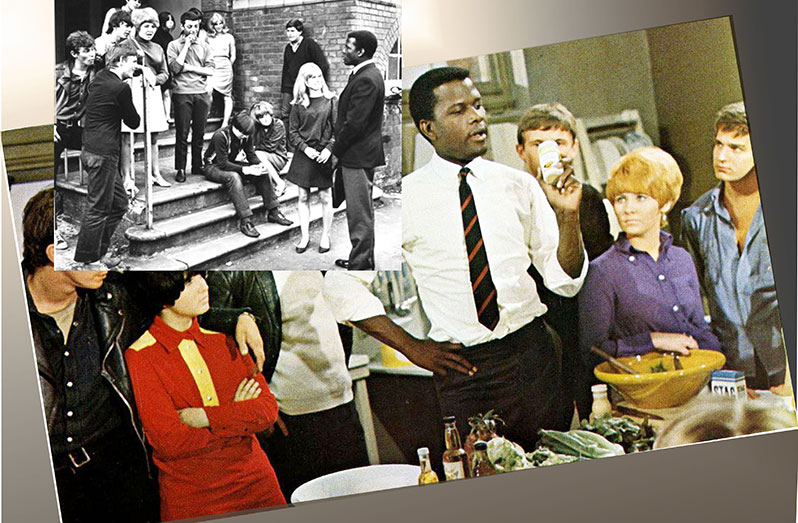 Sydney Poitier made his film debut in 1949 in ‘No Way Out’ and broke new ground in the movie industry as an actor and director. He won the 1964 Oscar for best actor for his performance in ‘Lilies of the field,’ but it was ‘Guess who’s coming to dinner’ that gave youthful minds an insight into the race relations reality in the US of A. But to many young Guyanese, Sidney Poitier was ingrained in our consciousness with the film “To sir with love.” Every talent show, Lulu’s song ‘To Sir with Love’ was attempted. He was the teacher from British Guiana post WWII who successfully managed a school of tough British youths. He made E.R Braithwaite’s book and life experience into one tremendous movie, as no other actor could have done.

MAIL -ONLINE- brought a most profound and meaningful expression of loss from Harry Belafonte, through his daughter, upon hearing the passing of his life-long friend with whom he shared the screen and the fight for civil rights. He expressed that “Losing Poitier was more difficult than losing Martin Luther King.” Sidney Poitier’s protege is the incredible Denzil Washington, the only Afro American actor on Hollywood’s A-List since Sidney Poitier. That inspiration persists and obviously will not be concluded there. We began with the Proust Questionnaire-Vanity Fair Jan. 2007 thus, we conclude with the question that leads to the answer that I like most. Sir Sidney Poitier was asked: On what occasion do you lie? He thus replied, “First, let me disarm that loaded question. I know how easy it is for one to stay well within moral, ethical, and legal bounds through the skilful use of words-and to thereby spin, sidestep, circumvent, or bend a truth completely out of shape. To that extent, we are all liars on numerous occasions.”