THE concept of using a mouth rinse as an adjunct to brushing with a dentifrice (toothpaste) is a sound one. In recent years, there has been a rapid increase in the use of mouth rinses and this review considers the relative merits of those currently on the market.

The dental profession and the public have two different perceptions when it comes to oral hygiene. The profession has oral health as its main objective whereas the public is more concerned with personal cleanliness and social acceptability. Nevertheless, the desired outcome is the same, namely the removal of dental plaque.
The accumulation of plaque and the inflammatory response it induces in the gum tissues favour colonisation of the pockets by bacteria, many of which have been implicated in periodontal destruction. But despite this process being so serious, of course, it is even less significant than the role that plaque plays when it is allowed to collect and remain on the tooth’s surface; it may harden and become tartar or calculus.

Because of these three major disease conditions, mouth rinses are designed to combat the multiple harmful effects of plaque. Basically, there are three classes of mouth rinses, fluorides for the prevention of dental caries, agents for the prevention of tartar and antibacterial agents for the prevention of plaque and gingivitis.
Fluorides are highly effective inhibitors of caries. The intrinsic activity of fluoride is its ability to enhance or accelerate mineral deposition in tooth enamel and to prevent the softening process. It has been also proven that fluoride may act by blocking the digestive activity of bacteria, apart from inhibiting acid production in the plaque. 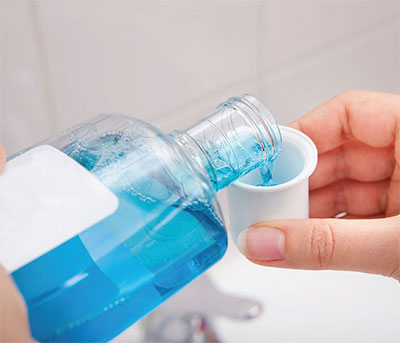 Calculus is an oral hygiene problem worldwide. Most dental professionals realise the value of calculus removal and the potentially adverse effects on gingival (gum) health. Calculus occurs due to the precipitation of calcium phosphate salts in the dental plaque. A major ingredient of mouth rinses and some toothpastes that prevents the formation of tartar is called phosphate. This drug’s activity is made more efficient in the presence of fluoride. Mouthrinses, which target existing calculus, cannot actually remove the deposit but only prevent it from increasing in quantity.
Chlorhexidine is the most thoroughly investigated and effective antiplaque agent available. Indeed with two rinses per day, there is no need to brush at all and yet maintain good oral hygiene. Listerine, a mixture of essential oils, has been commercially available for over a century. Promoted at first as a cosmetic to combat bad breath, it is only recently that its beneficial effects on plaque and gingivitis have been documented.

Throughout Europe since 1988, the mouth rinse market has displayed strong growth due mainly to the successful launching of Plax. Positioned as a pre brush rinse, the action of Plax is primarily detersive. Although it is certainly the most commercially successful according to studies done by Grossman and published in Clinical Preventive Dentistry, when used at home before brushing, Plax is virtually useless. Acti-brush and Colgate-Palmolive contain as their active ingredient triclosan/copolymer.

These mouth rinses concentrate on areas generally neglected by ordinary toothbrushing. This equals Steri/Sol which contains the potent hexetidine. Finally, evidence suggests that the efficacy of Lander and PerioGard are equivocal.

Whenever buying a mouth rinse, check to see if it contains chlorhexidine. If it does not contain this drug, I would not recommend its use if the maximum effect is desired.
Remember that a mouthrinse should remain in the oral cavity for at least 60 seconds before significant benefit is accrued.