THE UN General Assembly has designated 2021 the International Year of Fruits and Vegetables (IYFV) to raise awareness on the important role of fruits and vegetables in human nutrition, food security and health and as well in achieving UN Sustainable Development Goals. The National Agricultural Research and Extension Institute (NAREI) is pleased with this initiative. As such, NAREI in Focus will weekly highlight either a fruit or vegetable. This week information will be shared on broccoli.

Broccoli (Brassica oleracea cv. Italica) is the same species as cauliflower but a different variety. The edible portion of broccoli is known as the head and consists of fleshy green stalks and closely packed green ‘beads’ in a flower structure. 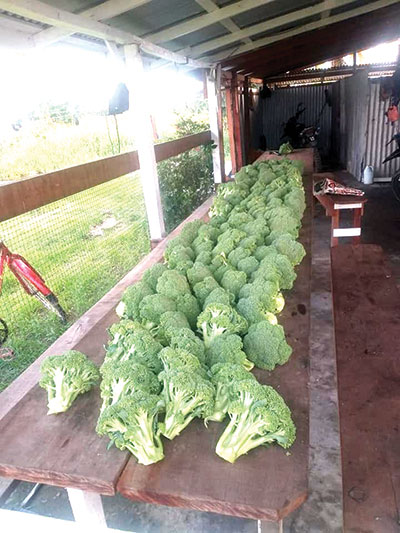 Seedling preparation
Use three parts of well-rotted manure with one part of sand for potting mixture
Soak mixture thoroughly
Place mixture in trays and sow one seed at 1cm depth in each well of the tray
Cover seed with mixture and apply water
Covering trays with a damp cloth until germination will speed the process and prevent surface capping
Water regularly with a fine watering can to prevent seedling damage
Feed seedling with a solution of 20:20:20 mixed at ½ tsp/ gallon every week
Transplant seedlings at the 4-5 leaf stage at 3-4 weeks after sowing

Irrigation
Water seedlings twice daily during the first week after transplanting Water daily for the next two weeks
Once plants reach a reasonable size they should have developed a sufficient root system to exploit soil reserves of water and can be watered every 2-3 days.
Applying grass mulch reduces the evaporation of water from bare soil considerably and allows the crop to sustain a greater interval between watering
Apply water to the soil and not to the leaves and head as this reduces the chance of fungal infection
Drip irrigation applies water directly to the soil. This reduces the loss of water through evaporation and improves head quality by reducing fungal infections and bacterial rots

Fertiliser
Conduct soil test to determine fertiliser requirement
Phosphate should be applied six weeks before transplanting
Use 270kg of TSP per hectare (230 lb/acre).
A mixed fertiliser such as 15:15:15 should be applied a few days after transplanting. An approximate guide, apply 10g (2/3 of a tablespoon), 5cm away from the plant to avoid ‘burning’ the roots. Repeat this dose at two and four weeks after transplanting.
Higher rates may be needed for very light sandy soils and lower rates may be needed for pegasse soils rich in organic matter.
Too much nitrogen such as urea will encourage excessive leaf growth and delay plant maturity

Weed control
Apply herbicide such as Herbadox or Lasso directly before transplanting
Residual herbicides should be applied when the soil is moist to be effective
Avoid disturbing the soil where possible after the application of a residual herbicide
Further weed growth can also greatly reduce weed infestation as water is only supplied directly to the roots of the crop.

DiamondBack Moth- The caterpillars of this moth can eat large proportions of the leaves and kill the plants at the early seedling stage. later in the season, when the plants are larger, a small amount of leaf damage will not harm the crop. Sprays such as Halt based on Bacillus Thuringiensis (BT) are most effective against this pest and are less toxic to humans than other sprays. Mix one teaspoon in a plastic bottle of water and shake well then add to one gallon of water in the sprayer.

Budworm (Heartworm)- This is also a caterpillar that kills young plants by feeding on the apex. Treatment is as for the Diamond Back Moth.

Disease
Damping-off is caused by the Pythium Fungus and may be a problem at the early seedling stage.
Symptom: narrowing of the stem near the base of the seedling which quickly turns watery, causing it to collapse.

To reduce risk avoid overwatering and ensure that that there is good drainage.
Chemical control can be achieved by spraying the bed with Aliette (Phos-al) (1 tablespoon per gallon) before sowing.

Black Rot is a bacterial infection that first appears at the margins of the leaves. Later it may spread along veins and eventually, stems may turn black. Chemical control can be achieved by applying Trimiltox which has some bacterial action.

Leaf spot is a fungal infection that appears as dark spots on the leaves progressing to form lesions. It is a major problem during heavy rain. It can be reduced using chemical control by spraying with Trimiltox.

Harvesting
Cauliflower is harvested between 50 and 80 days after transplanting depending on the variety. Allow the curd to reach full size but pick when it is still compact before the branches of the curd begin to separate. It is better to pick the head when it is slightly too small rather than wait for it to spoil. Cut below the head leaving a few leaves on to protect during transportation.

Nutritional Value
Broccoli is a good source of fibre and protein and contains iron, potassium, calcium, selenium and magnesium as well as the vitamins A, C, E, K and a good array of B vitamins including folic acid. Discover more about why we need fibre, vitamins and minerals.