THE word “empowered” is often defined through varying gestures. Whether it be the likes of individuals, becoming their own bosses or creating a form of employment for others, it is without a doubt that today’s young women have transcended the norm and are becoming more innovative, given the wide array of women-owned small businesses that are geared towards empowerment.

Hailing from the Ancient County of Berbice, one such young woman is Whitney Gill, proprietor of “Ethos Maid Service”. Describing herself as a very family-oriented individual, Whitney expressed that after spending her childhood years in Berbice, she was offered the opportunity in the form of a scholarship to further her studies at the University of Guyana, where she would later meet the man who would become her husband and play a major role in the forming of her aforementioned business.
“As a young woman who grew up in a closely knit family after moving to Georgetown, for a while I had noticed a lot of women, more so young women, are either being mentally or physically abused by their partners, but are not in a position to do anything about it. One day I even met a young woman who has been suffering abuse from her husband until it got so bad he almost murdered her. She tried getting away from him, but due to the fact that she was dependent on him for the day-to- day survival of herself and kids, it was difficult for her to leave.
“So my husband and I, as a means to help this young woman, decided to start a funding programme with the little that we had to help her and her family out, until it became a norm for us, so we started asking family members and friends for donations to help individuals facing the same problem,” Gill conveyed.

Further expressing that things would later take a turn out of their favour, Gill noted that the funding project was suspended for a period, which would allow the birth of her business, “Ethos.” 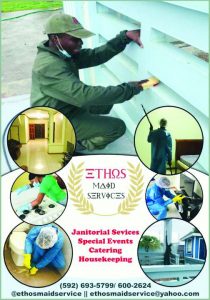 Ethos Maid Service was birthed as a way of creating employment for women and males in vulnerable situations. The word “Ethos” is a Greek word which was firstly used by Aristotle that refers to one’s character, custom, values or practices. However, Whitney did note that she was fearful of making the first steps to becoming a business owner, but it was motivation from another young entrepreneur, Daniella Da Silva, who along with Whitney’s husband motivated her to take the leap of faith.
“I had said to myself instead of just helping when I can, why not try to create something stable so they can no longer feel hopeless and dependent, but rather strong and independent. Even though Ethos Maid Service has only been in full operation since November of last year, we are working hard not only to meet clients’ satisfaction, but also to fulfil our mandate with helping women who have potential but need that motivation to further push themselves to higher heights,” Gill articulated.
When asked about the progress Ethos has made since its launch date, Gill replied, “As Ethos progresses, I am for discussions with stakeholders who like myself are trying to make a difference through the use of our business. Yes, I’ve heard, ‘but you’re too young to make a difference’, but I believe if you’re persistent you will get it and if you’re consistent you will keep it,” she said .

In Her response to advising up-and-coming young entrepreneurs, Whitney stated, “ The advice I would give to any aspiring entrepreneur is to run your race, your only competition is yourself, wake up, put your all into what you want to do and make it work. Pray and stay focused and all will fall into place.