IN the Guyana Review Magazine 1995, an interesting article by Elfrieda Bissember and Lennox Hernandez with a cover article title of “THE DECLINE OF ARCHITECTURE,” a look at architecture, design and the aesthetics was explored with a promising but limited addition on preservation. This article does require a second look 26 years later. What have we lost? Why is it important to sustain and is the current trend better or just less expensive? I’m referring to the choice of material of wood or concrete. I saw a former neighbour from the range apartments in West Ruimveldt, Idris Hodge, poised in Chapel Street, Lodge, in front of his late dad’s home, where I went to photograph what I assumed were the oldest houses in Lodge, that now lay on Chapel Street between Durban and Princes Streets. From way back when Lodge was a village, we started the discussion on why I was so interested in the old architecture. I related that for both emotional and practical reasons: the emotional reasons lie with what has been happening over the past 35 years: Georgetown is becoming a town of military pillboxes and unattractive Brandwagts; there’s indeed an obvious absence of design and ornamentation that reflected any artistic attachment to the original style. It may very well reflect the preferences of the householder rather than the architect, but what is, is.

We entered that area of practical experience of living in West Ruimveldt, where across the scheme area concrete prevailed; it was better for low-economic housing. However, front doors were mostly opened and the privileged head of the apartment lay at the door, no! Not to keep a check on passersby, well, in a way that was an incentive, but mostly because those damn apartments were ‘HOT’ and often too humid to remain upstairs. We reflected on the other observation that could not be avoided: many persons, especially the women, were subject to health problems such as arthritis, breathing problems, joint pains and vision problems. 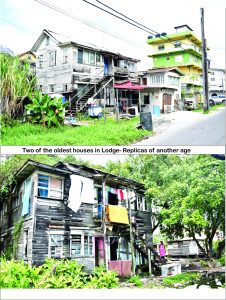 The men would gather on the corner, back then that would be the two-foot walls of the bridge that covered the gutter waterway when you passed the two-family, 309-310 of Singh and Kennedy, or head for the football practice on the dump. Those outdoor habits possibly saved the male occupants; they would only turn in to sleep or to prepare to take the mistress out to the cinema mostly on week-days. I also lived in a concrete house on Robb Street, Bourda, and all my children developed allergies. On moving out, I realised that the allergies were gone.

In retrospect, I had blamed the contractor for using bad paint, but after talking to a pal in the medical field I realised that the fungus in the paint was not a product of the paint, but instead was a direct result of the house being at the rear of the yard, some six feet from the clogged, concrete canal that children used as a street two generations before. The stagnant water was seeping into the yard and possibly infiltrating the walls of the house; this is possiblY the reason that all the support wooden exercise benches had rotted. I then understood why in early Georgetown stilt-posts were demanded and bottom flats discouraged. I was reminded that assessments on building materials have to be viewed in our context from the position of our tropical environment and that naturally “timber for building occurs mainly in the hot,humid climates — these areas ranging from 15º north to 15º south of the equator.” See Design and tropical timber housing by John P. R. Falconer: nature has determined the balance best for our housing; we choose materials that require AC units etc. to manage basic comforts. It should be necessary that our professionals in this area publish a fact outline of what materials are best for our health when building, from what I have witnessed and experienced. I look mainly at our forests.

In Chapel Street I located the old, admired Lodge buildings; they are in a bad way and one is almost gone. In the brief travelling I did I learnt that in some countries the authorities intervene in sustaining such structures identified as National Trust locations, for which owners are indebted to the state in a recovery cycle. There are laws against destroying historically significant buildings, with harsh penalties; here also we are behind. One can use the argument that they should go to the bank, take a loan and fix their houses. It is a stupid argument; a man retires after he has raised and educated his children and will not get a loan to fix his steps from any bank. He and his house are doomed unless he has the skill needed to continue earning. The awareness and move towards this level of preservation rest with City Hall and the National Trust, and the support of the state. What we have lost will be dealt with in a subsequent article.