Songs of devotion, sweet melodies honouring the Goddess of Light, celebrating Deepavali, as good, like an expert charioteer raced on fiery wheels conquering the darkness of evil.
But far away, across the seas, in a small South American country, a young Hindu girl struggled with the dark forces of something bad.
On a Diwali night, she had been born and named after the earthen lamp.

Diya held the unlit diya in her hand and looked around uncertainly at the lighted lamps glowing in the night. A spectacular scene in a golden hue, flickering flames that drove a strange fear in her heart. She couldn’t understand this deep fear of fires that gave her a feeling of doom. It stayed within her as she grew each day to age sixteen; this Diwali night.
“How long am I going to live life like this?” she wondered, looking at the diya in her hand, “I must overcome this fear, I must.”
She was a true devotee of the Hindu deity, Mother Laxmi and she whispered softly, the Goddess’s name as she bent to light the diya but before she could, someone held her hand firmly.
“Don’t do it, Diya,” her mother said. 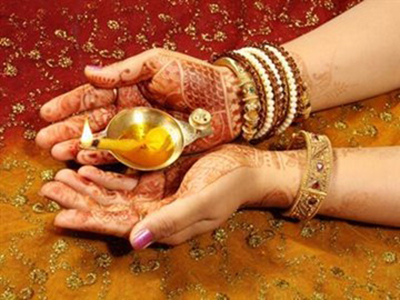 “Why mom?” she asked, confused. “Why can’t I light a diya? Why can’t I celebrate this day I was born on?”
“I don’t know, my child,” Her mother said comfortingly. “The first Diwali you did that, you screamed like your body was on fire.”
The Pandit had told her mother after she had consulted with him hoping he could explain the strange occurrence in her child’s life.
“In a former life, your child had a bad encounter, so bad, the fear has carried on in this life.”
“When or how will it go away?” the worried mother had asked.

“Only time will tell,” the Pandit had revealed, “For she will have to cross seas to that birthplace in the motherland to find the truth that will release this fear.”
Diya had been born in a society with a West Indian culture, a beautiful free life to live; to enjoy. It was completely different from the harsh cultural traditions of the motherland where the caste and gender bias systems were still dominant in the lives of the people.
Diya was a brilliant and smart child and she excelled in school. She wanted to be a doctor, nurturing in her heart, a passion to work for the poor.
As she stood watching the lighted diyas, she thought it was time to banish that fear of fire from her life. She walked into the Mandir, a glint of determination in her eyes and sitting at the foot of the Hindu Goddess she prayed.

“Please Mother, allow my mind to see what happened in my past life so the fear in me can be dispelled to live this life.”
The night wore on and one by one the earthen lamps burnt out as the dark hours passed except one. As she sat there in deep prayers, Diya’s felt spiritual form transcending time, crossing the seas to her past home. In a poor village where survival and hopes hung heavily on tradition, she saw little girls huddled in corners, seemingly orphaned by their own; hungry and helpless.
“Oh dear God,” she exclaimed quietly, disturbed.

The diyas in the temple continued to burn as she was guided to a modest house, brightly lit. The family was celebrating Diwali, a beautiful, happy family, but all the children were boys. Diya did not feel any joy for in her heart she felt something bad had happened there.
A little boy was asking of his father, “Why isn’t aunty coming out?”
“She doesn’t like the fireworks.” The father answered.
Those words seemed to tell Diya something and she entered the house.

In the house in a dim-lit corner, a woman sat, expressionless as though time had consumed all her emotions, leaving her empty. Diya looking at her felt a strong sensation in her being and reaching out she touched her lightly. The woman raised her hand and gasped and from nowhere a fire seemed to ignite and a baby’s terrified screams filled the air.
“My baby!” the woman screamed, “Don’t hurt my baby!”
“It should have been a boy,” cold voices said from the shadows.

“No!” the screams continued and Diya opened her eyes with a choked gasp, she felt suffocated and it took her long time before she could pull herself together. One diya at the feet of the Goddess was still alight and Diya picked it up, crying.
She had found the answers she wanted, that released the fear within her but a mother was still crying for a lost child, re-born in a home, far away.
“Bless me, oh dear Mother,” Diya said, “So in this new life I can return to save my mother from her deep grief, so she can be happy.”
It didn’t take her long to make that memorable trip back home as a reincarnated soul. The family who had not wanted the baby girl, watch stunned as Diya reunited with the mother of her past life.

“Your baby was reborn with the blessings of Mother Laxmi,” Diya said to her, “No more pain, no more tears, I have returned to you.”
A light sparkled in the woman’s eyes and her hands, the burnt, scarred skin grasped Diya’s firmly.
The death and rebirth of a child on the same Diwali night, a divine intervention to right a wrong.