A LOST SOUL – NOT OF THIS WORLD

FROM morn to night, death rides on a pale horse, an emissary of fate.
But stories are told of restless souls, haunting spectres, wandering, lost and confused because of their unexpected end. Such tales are often spoken of by morticians because of their close working experience with the dead.
And for Anthony, the mortician, it was a night like every other night at the morgue, cold and silent. He worked deftly, preparing the dead and securing them in the vaults until it was time for their final journey.

But questions are always asked about death that seemed premature.
Is it all in God’s plans?
“We may never know,” Anthony mused as he pulled off the white sheet from a body that was brought in two days ago.
The facial features were hardly recognisable for it had laid about five weeks in a shallow grave covered with scrubs. The pathologist who performed the autopsy had determined the female was in her late twenties and that she had died from a stab wound to the heart.

“A young life interrupted,” he said quietly, “May your soul rest in peace, dear.” 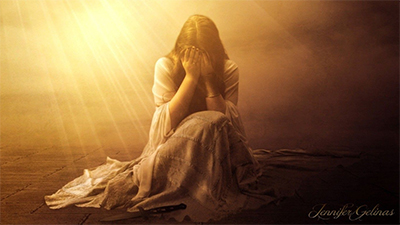 The night wore on and close to midnight when his shift would have ended, he felt a strong presence. He had steeled his mind to be strong, for the twelve years he has been working at the funeral home to deal with strange encounters.
Tonight something was different.

The chilling cold and a soft moaning cry forced him to turn from the table he was cleaning and he saw her standing in a corner, a beautiful young woman, a pained look on her face.
If he was not awake and at work, Anthony would have thought he was having a dream. She seemed so alive in a white floral dress, like someone who has casually walked in from the street. He did not move nor said a word, just stood there looking at her. She was not looking at him but at the vault where laid the remains of the young woman found in the shallow grave, a woman not yet identified.
Now he knew what she looked like, her deep pain sending a chill to his bones for she had died a brutal death by cruel hands.
“I wonder who she is.”

The thought just left his mind and she turned as though she heard his unspoken words. He held his breath and she looked at him but she did not move, seeming lost, a soul not understanding what happened to her.
The clock struck midnight, a startling sound that pierced the deathly silence in the morgue. But Anthony did not fall victim to fear, for he was feeling a sense of sympathy for her.
“I should not though,” he warned himself, “for she is not of this world.”

Yet there was something about her that seemed so real as though she was not dead.
The door opened as an assistant came in to relieve him from his shift and looking at Anthony’s face, he joked, “Wah happen, man, like yuh see a ghost?”
She was still there, not vanished, but the assistant could not see her, something that surprised Anthony and he questioned himself,
“Why am I seeing her?

He had trouble sleeping that night, and as he laid in bed, he thought, “Her family needs to claim her body and give her a decent burial so her soul can ascend to Heaven.”
The discovery of her body by a hunter in a forested area off the highway had featured in all the newspapers and news channels but no one had yet contacted the police.
“How has no one missed her as yet?” he wondered.
And as Anthony’s eyes closed in sleep, a lost soul waited for answers and an obsessive killer, miles away drank a toast to her photograph on the wall, pleased he had gotten away with the perfect crime.

“You will now belong to no one,” he said as he poured another drink and lifted his glass, “Only to me.”
Anthony returned to work in the evening, hoping the police had word on the killer or a family member had come forward to claim the body but nothing had happened.
He shook his head resignedly and began his work in the morgue, glancing at the vault holding the young woman’s body. The clock ticked and as the night grew older, the cold slowly deepened and Anthony heard an icy whisper, crying out just a name, “Rachel.”

He turned and saw her by the vault, an edge of desperation in that whisper, wanting him to know who she was.
“I wish I could help you,” he said silently.
And as though she read his thoughts again, sudden tiredness overcame him and he fell into a doze, dreaming he was in a bus travelling out of town to a small, neat community on the East Coast, and walking along a paved road, he came to a modest, flat concrete house. No one was home and as he walked around inside the house, he saw two suitcases by the door and travel documents on a corner table. But his eyes kept being drawn to the fawn sofa.

“Something bad happened here,” he surmised and suddenly he seemed to be in an audience as a scene played out in front of him.

She came out of the bedroom, her hair wet, having just taken a bath and laid down on the sofa closing her eyes. A dark figure who had hidden in the house stepped out quietly, a knife in his hand. He stood over her and feeling the presence she opened her eyes but a little too late as he stabbed her in the heart.

The shocking scene told him the story of her death.
“I can’t believe this,” he said to himself as he left work that night, “I’m actually helping a ghost.”
In the church where she had sung in the choir as a little girl, and where she had exchanged marriage vows, she laid now, in eternal sleep as the pastor prayed for her soul to find everlasting peace.

She was supposed to have been in the Bahamas on a month’s vacation, the pictures and short messages sent from her phone to her close friends and family testified to that fact. How then could she be vacationing whilst her body was lying in a grave?
Someone clever and evil had planned the crime, leaving not a clue nor a trail. The plan seemed perfect until her family started to receive anonymous messages about the photoshopped pictures, false messages, and the unknown body in the morgue.

Anthony was playing his part in helping her and soon the family identified her body from a tattoo on her shoulder and a birthstone ring on her finger. The police came under pressure for answers and several suspects were detained but the main focus was on the ex-husband. He had an airtight alibi for the night she was killed, but her family was certain he was guilty because of their troubled marriage and recent breakup.
Anthony sat at the back of the church, moved by the eulogy of her life. She was standing by her coffin, her face pensive as she looked at her crying family. Then her expression changed to dark anger as her ex-husband came in the church, a bouquet of fresh flowers in his mind.

He stood by her coffin, with his head bowed as though he was saying a prayer for her, when the organ that had been playing softly, made a loud sound, startling everyone.
She was so angry, it somehow gave her the power to show it. The Pastor’s Bible that had been sitting on the pulpit fell onto the ground and the bouquet he had brought, was thrown off her coffin, bringing gasps from the mourners.

Rachel’s mother got up and said, as calmly as she could, to her ex-son-in-law, “Travis, move away from her coffin, she doesn’t want you close to her.”
He stepped back and glanced around nervously, as though expecting to see her.
“She is angry,” her mother said, “because her killer is here.”

He left immediately and Rachel watching him go, said, that no one heard except Anthony, “You will not get away with this, I will haunt you until you confess to my murder.”
Anthony said, “And then your soul can rest in peace.”
She smiled and nodded, “Only then…”