Hello Everyone,
I HOPE this week has treated you well.
I recently received a request to discuss adultery and its effects on mental well-being.
A woman had written about her husband’s infidelity and the anguish it brought her. I think it is an important topic to discuss, as it is so prevalent throughout our society. I myself know very few relationships that are monogamous- which means to be married to or to be in a sexual relationship with just one partner.
We’re going to talk about being unfaithful in general as only married people can commit adultery, but you do not have to be married in order to be devastated by that betrayal.
For the religious, adultery is a sin; the word from its Latin heritage ‘adulterare’ means to corrupt. It is one of the major causes of breakups/divorce worldwide. However, its effects on both individuals are widespread.
Unfaithfulness/cheating causes many problems with both the cheater and the victim, ranging from psychological, physical to financial stress (long and short term). It also affects an entire family. Even though it’s so rampant and typically ignored, cheating is usually disapproved of in society. In fact, it is still against the law in certain countries such as Saudi Arabia, North Korea and Pakistan.
There is no doubt that the idea of adultery/cheating is attractive. Humans love reading about it, watching it on television and many simply love the excitement of pleasures we cannot easily have.
Nevertheless, there are after-effects.
For the person who has committed adultery/cheating, they may experience:
– Intense guilt
– Anxiety about being caught
– Depression due to consequences if/when caught
– Violence, as some people can get physical if they find out they have been betrayed
– End of a marriage/ relationship
– Broken relationships with children and other family members
– Financial stress
– Medical consequences, such as acquiring a sexually transmitted disease (STD)
– Pregnancy (themselves or the outside person) 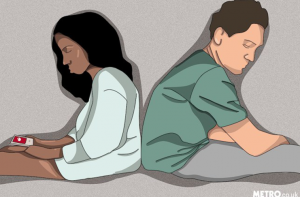 Now, what does cheating do to the victim?
It causes extreme hurt, low self-esteem and self-doubt. It ruins the trust for not only the current, but also for future relationships. This is called projecting, when the victims are more often than not afraid, insecure and untrusting in their new relationships. This can lead to high anxiety, depression and even suicide.
Cheating will also affect the children if the family is split apart. Typically, trust issues are also passed on to them, affecting both their future friendships and intimate relationships.
I know many people who have never been cheated on (to their knowledge), but are terrified of it because one of their parents were unfaithful. This prevents them from having a normal, healthy relationship, which includes trust, love and respect.

Why do people cheat?
Other than serious illnesses such as sex addiction, there are many contradictory reasons as to why people cheat. It is known that rich and powerful men/women cheat, as they believe everything has a price. However, people who are not rich or those who are instead with powerful partners cheat. Why? Because they feel as though they do not have enough power in the relationship. Many people also blame cheating on drugs and alcohol. They have had too much, their inhibitions are lowered which causes normal thought processes to go haywire.
Whether you are male or female, rich or poor, black, white or brown, powerful or not, have a mental illness or not; there are people who cheat and people who do not. It’s simply a personal choice. There will always be other problems to ‘blame’ the cheating on, but despite temptation, we as humans have the capability to choose whether we hurt someone deeply or not.

The main reason always cited to me is a lack of attention. The partner has felt ignored by their significant other which has lowered their self-esteem and self-worth. Therefore, they seek attention elsewhere.
There are many ways to give attention to your spouse. Some examples are constant communication of the problem—not talking, ignoring and holding a grudge solves nothing. Other examples are being physically and mentally present and affectionate, compassionate, patient, empathetic and sexually active. Human beings long for these types of connections. Basically, cheating is an external reaction to an internal problem. Participating in the above examples are internal solutions.

What happens after you have found out?

Well, there is a big decision to make. Do you stay and trust that it will not happen again or do you end the relationship? I did not realise until recently how many people are stuck in this type of situation, as they have nowhere else to go and no other way to financially support themselves or their children.
This is where the community groups that I have previously spoken about come into play. If you have been betrayed in this manner, you are definitely not alone.
There is strength in numbers and together we can start the healing process.