FIRE Chief Marlon Gentle has hinted that the fire that destroyed the Sachi building on Regent Street early Monday morning was deliberately set.

Gentle disclosed that the Guyana Fire Service had discovered some items that were used to break into the building, inclusive of welding torches, both behind and on the inside of the remains of the building. “We would have discovered some items, breaking implements and so on, in the building and at the back of the building, which indicates that the building was set on fire. The persons used portable welding torches, and they cut open the grill and steel and removed it,” Gentle said, adding: “That’s how somebody gained entry into the building, and we believe this fire was set by them. We don’t know the motive yet, but the police are now apprised of the situation, and the investigation is going to take a different direction from now.”

He told the Guyana Chronicle that some time around 02:32hrs on Monday, the Service received several calls reporting that the building was on fire. He stated that several units were dispatched to the scene, and moved to contain the fire.

“We dispatched units on the scene,” he said. “When we got there, smoke was in the building. Because of how the building is configured in terms of security, we took a while to get in, so by the time we got in, the fire had spread to the second and third floors. So we just had to defend and contain, and defend the other buildings to make sure that the fire did not spread to them, which we were able to do.”

The Fire Chief said that a total of about 35 ranks, along with five pumpers, two tankers, and an aerial vehicle were deployed to contain and put out the fire.

The Sachi building housed three businesses at 136, Regent Street. The tragedy now leaves the owners with millions of dollars in losses. The Guyana Chronicle was made aware that one of the businesses that was housed in the building was Fazen Variety Store, which had been in operation for almost a year.

Owner of the business, Mr. FaZen, who is a Chinese national, was in a state of total shock, and said that he was unable to speak to the media at the time. The businessman was unable to provide an estimate as to how much he had lost in the fire. The Guyana Chronicle was told that the business has some 16 employees. 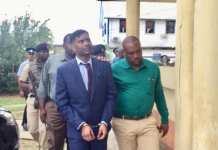