–raft of measures implemented to tackle violence against women, children

GENDER-Based Violence (GBV) is viewed as a scourge that must be eradicated and the Minister of Human Services and Social Security, Dr. Vindhya Persaud emphasised, on Friday, that the government is quite serious about tackling this issue in Guyana.

The Minister said this as she addressed Guyana’s launch of the ‘16 Days of Activism’ global campaign, which, according to the United Nations (UN), is meant to raise awareness on GBV, and encourage actions that counter the issue.

There are sobering global statistics that underscore the need for this campaign. Minister Persaud noted that the UN found that an average of five girls or women are killed every hour.
“The (UN) report that came out and gave a snapshot of 2021 really brought home that every day, within 60 minutes, five women and girls are killed. If that is not alarming, then I don’t know what else can shake us to our core, and remind us that you need to make every effort to end the scourge of violence against women and girls,” the Human Services Minister lamented.

She added: “As we continue to look at what we are tackling in our world today and in our country, we are fully aware, again, from that report by UN Women that 81,000 women and girls would have lost their lives in 2021. That’s an enormous number of women and girls!”

Alarmingly, she highlighted that 45,000 of those 81,000 women and girls would have lost their lives at the hands of a family member. As such, she contended that violence is close to home.
But stark global statistics are not divorced from the reality in Guyana. The Human Services Minister acknowledged that GBV is an issue here, but posited that it is one that her Ministry, and by extension, the government has been serious about combatting.

“… this brings home the many steps that we need to take to eradicate violence against women and girls,” Dr. Persaud said.
In 2020, months after the Irfaan-Ali government took office, Dr. Persaud said Guyana signed on to the UN’s Spotlight Initiative, which led to the creation of a comprehensive referral pathway to tackle violence locally.

One of the first initiatives, part of that comprehensive anti-violence pathway, was the establishment of a toll-free 914 hotline to report domestic violence in Guyana. The minister said that a total of 11,327 calls were made to that hotline. This year, the figure increased.

“… that number will continue to climb, but I feel better about it, because it means people are taking reporting seriously, and I believe that’s the first step in this fight. We must report every instance of violence and abuse,” Dr. Persaud underscored. 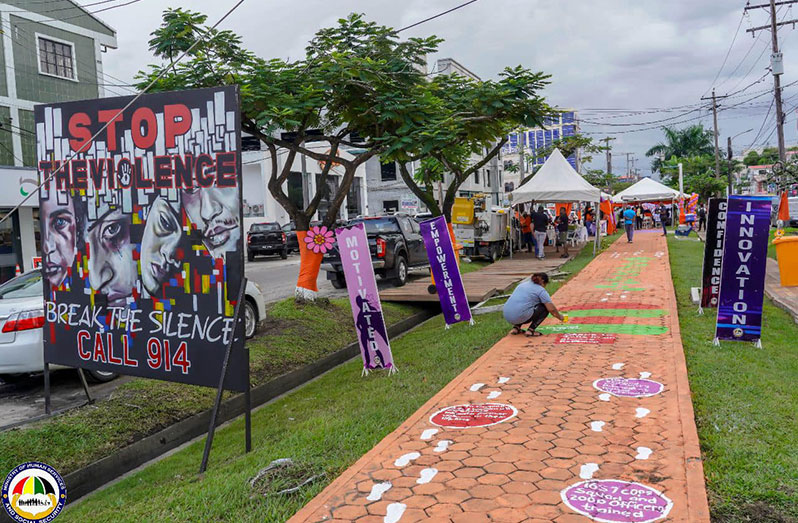 Another initiative was the creation of the novel iMatter mobile app which offers resources to those in need. Those resources, the minister highlighted, range from a 914 panic button for immediate assistance to educational information for any person to access and digest.

Because inadequate police officers’ responses to cases of domestic violence have been rife, Minister Persaud reminded that police training has also been a key intervention. So far, her ministry has been able to train 1,476 policemen under the ‘CopSquad2000’ initiative; a total of 2,000 officers have been targeted.

“I know we haven’t gotten to 2000, but we’re working on it, and these are the kinds of steps that we’ve taken as a government, as a country, and as a ministry to be able to let people know you are not alone.

“There are services like shelters, rent that we can pay for you, linkages that we have developed between you and the women’s innovation investment network, to take women to financial independence and so many of our other services. The point is, we are all involved. We are all united, and that constitutes activism at its finest,” Minister Persaud said.
Other key initiatives launched include the development of a survivors’ advocate programme, and the provision of much-needed legal services, pro bono. And all of these initiatives, she said, signal the importance of partnerships and community involvement in tackling a national issue.

“… We must work with every partner, and take every partner to the level that we want to be at to deliver the services across the length and breadth of our country,” the Human Services Minister underscored.

On Friday, at the launch of the ‘16 Days of Activism’ campaign, a new “Orange Avenue” was created on Camp Street, Georgetown. Orange is the internationally-used colour for anti-domestic violence efforts, and Minister Persaud hopes the avenue can be a permanent fixture, where people can learn about the services being offered by the ministry and its partners.

She also hopes that it would be able to stimulate further conversation on the importance of ending violence, thereby encouraging people to meaningfully act to combat that violence.
Aside from the Orange Avenue created, the Ministry of Human Services and Social Security will host several activities to commemorate the 16 Days of Activism in the coming days. Consultations on a new Family Violence Bill, which seeks to address the gaps in Guyana’s existing Domestic Violence laws, are among the forthcoming events.