The vibrant evening started off with an impassioned, well-delivered speech from President Dr Irfaan Ali who underscored the occasion as one for recommitment to securing Guyanese freedom through working together for the “One Guyana” vision.

“Together, we are going to embark on the journey of prosperity with all of you; the achievement of peace and prosperity; this is a golden opportunity to attain that objective. We will succeed and make proud all those whose struggles were important in achieving our independence,” Dr Ali said.

“The future belongs to us. The naysayers wish to break our stride, but the evidence is overwhelmingly clear that Guyana is surely… on a fast track to peace and prosperity. Let us keep it that way under the umbrella of ‘One Guyana’”.

The ceremony was attended by several Cabinet members, and heads of foreign missions.
During his address, Dr Ali reflected on the sacrifices of our ancestors, including that of Damon, the martyr after whom ‘Damon Square’ is dedicated. 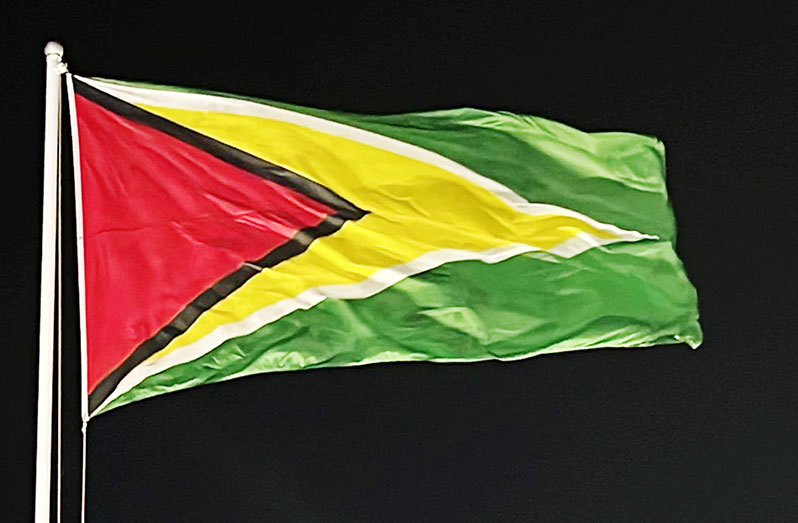 The Damon Square was packed to capacity as Guyanese from all walks of life flocked the venue to witness the celebration. Intermittent showers continually threatened the event but the steadfast crowd was not to be daunted in their determination to celebrate.

Many found shelter as best they could and continued to weather out the downpour until the final flag-raising and fireworks at midnight.
Dr Ali congratulated the Pomeroon-Supenaam region on being the first administrative region outside of Region Four (Demerara-Mahaica), more specifically the capital city of Georgetown, to host the flag-raising ceremony.

The President explained that Region Two is the first in a newly implemented rotational system for the flag-raising ceremony which will see the ceremony being taken to every region across the country, illustrating the importance of each administrative region to the collective development of Guyana.

“Every single region, every single group will and must benefit from the prosperity that will come our way. This government will ensure every single development strategy is crafted under our ‘One Guyana’ future and ‘One Guyana’ umbrella, in which all our aspirations can be realized together.

“We must invest to create an even platform in which every child must have the same equitable access and same future in the same country. That is the future we want,” Dr Ali stressed.
The President also used the occasion to call for a renewed duty among Guyanese to safeguard our territorial integrity and sovereignty.

“We must continue to stand united to defend our motherland. Our constitution mandates that sovereignty belongs to the people. Our path to peace is paved with good intentions,” President Dr Ali said.
Dr Ali underscored that notwithstanding the country’s firm path to prosperity and high levels of economic growth, there is value in ensuring all Guyanese benefit.

“Every family must rise and enjoy the development that must take place. We understand far too well that our economy and the lives of people cannot be measured by numbers, [and] cannot be measured by a balance sheet.
“Growth [is about] much more than [an] economic indicator. Real growth must uplift all the people of our country,” the President said.

President, Dr Ali also delved into several achievements of his government over the last two years, including in the areas of housing and water, infrastructural development, education, health care, and citizen welfare.

“Tonight as we celebrate our independence, I want to lay down the facts, lay out the framework and the plan that we have in advancing our country long into the future; building the foundation that will ensure [a] sustainable future for the generations to come,” Dr Ali expressed.

“As we reflect and celebrate today, it is important to understand that you have a government that is responsive, responsible, and proactive in making the right policies to enhance the welfare of the people of our country.

“We are redoubling our efforts to stay connected to you and ensure we continue to listen to you. I am taking this opportunity to outline these accomplishments and strategy moving forward because I want you to know we are on a forward-looking trajectory,” the Head-of-State underscored.

Achievements noted by the President include the allocation of over 11,000 house lots, the building of more than 1500 housing units, distribution of more than 4000 land titles, and expansion of coverage of water in the hinterland to over 60 per cent.

In speaking about infrastructural development, the President cited the ongoing implementation of the comprehensive highway development plan.
The evening’s ceremony was chaired by Michella Abraham-Ali, and saw a number of cultural performances by several leading Guyanese performers.

Carlvin Burnett, Diana Chapman, Abel Stokes, Don Johnson, Cassie Adams, and Nekeita were among the performances. The National School of Dance also made an appearance.

The evening started with the arrival of Prime Minister Mark Phillips, followed by the arrival of President, Dr Ali.
On his arrival, Dr Ali reviewed the Guard of Honour, and then delivered his address.