ATTORNEY-General Mohabir Anil Nandlall, S.C., and Vice-President Dr. Bharrat Jagdeo have been given the greenlight to move to the Caribbean Court of Justice (CCJ) to challenge the Court of Appeal (CoA)’s decision that it has the jurisdiction to hear and determine the appeal filed to challenge the dismissal of APNU+AFC’s Election Petition 99 of 2020.

On Tuesday, at the Kingston-based CoA, Chancellor of the Judiciary Yonette Cummings-Edwards ruled in favour of a motion filed last week by Nandlall, and Jadgeo, as the General Secretary of the People’s Progressive Party (PPP).

In the motion, the applicants sought an order granting leave to appeal the court’s December 21, 2021 decision.

By way of a majority ruling, the court had said it has jurisdiction to entertain an appeal challenging Chief Justice Roxane George’s decision to dismiss the said petition, on the grounds of late service, non-service, or improper service.

Secondly, the parties were seeking a stay of execution of the CoA’s judgement.

During the hearing, APNU’s lawyer, Roysdale Forde called the move to the CCJ premature, since it should have been considered along with other things such as the nature of the case, and the fact that the substantive matter of the appeal itself is yet to be heard.

However, Trinidadian Senior Counsel Douglas Mendes, who represented Jagdeo, said that the matter is of great public importance. He also noted that the December ruling was not unanimous, but by majority.

After hearing both sides, the Chancellor said, “This is a matter of great public importance, and, given the nature of the application and the fact that the application is brought under the respective sections of the Caribbean Court of Justice Act, this court sees no reason to deny the applicants leave to appeal.” 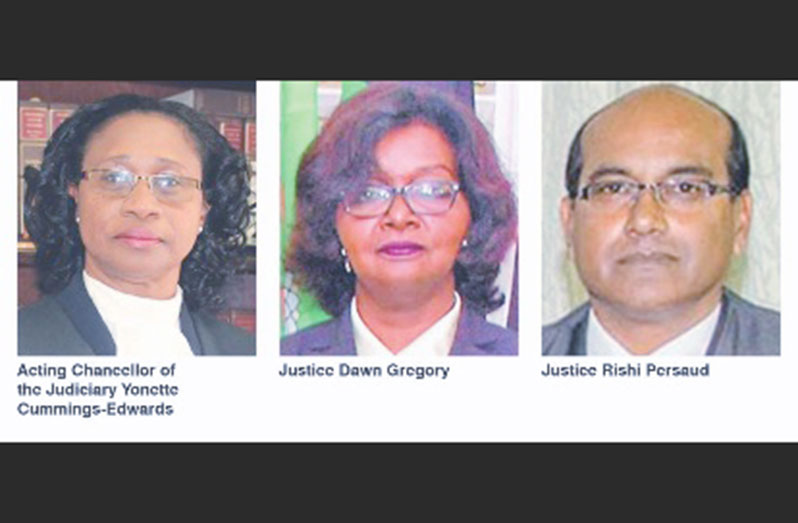 As such, she granted the leave, along with an order to stay the court’s December ruling.

In a 2-1 decision on December 21, the Chancellor, and Justice of Appeal Dawn Gregory said that the Court of Appeal has jurisdiction to hear and determine the appeal that has been filed.

The Chancellor, in her ruling, said that the decisions of the Chief Justice were a final order on both the election petition, and a preliminary issue of compliance.

Since the Chief Justice’s decision was a final order, the Chancellor said that the petitioners have a right to an appeal, since there was no decision on the petition itself.

She also ruled that the Full Court of the High Court does not have the power to hear the appeal of an election petition dismissal, for want of compliance. She said it is a power Parliament should consider conferring upon the Full Court.

However, Justice of Appeal Rishi Persaud disagreed, as, according to him, the applicants, Monica Thomas and Brennan Nurse, had no right to appeal, since there was no final decision by CJ George, who had dismissed the application in January, on the grounds of serious non-compliance. At the time, the matter was before the High Court.

In his application for leave, Nandlall said that the intended appeal is a matter of public interest, which touches and concerns matters of the 2020 General and Regional Elections, and, as such, are proceedings of great general and public importance.

Additionally, he claimed that the intended appeal is an arguable one, with a realistic prospect of success on the issue of whether the Honourable Court has jurisdiction to hear the civil appeal.

According to Nandlall, the Appeal Court has a duty to protect the integrity of appeals, so that they are not rendered nugatory before they are heard and determined.

As such, he asked the Appeal Court to grant the reliefs being sought, so that there may be a resolution of the fundamental issues which concern the interpretation of the Constitution, as well as issues integral to Guyana’s Constitutional democracy.

The initial appeal case was filed in January 2021 by Forde and Trinidadian Attorney John Jeremie, S.C. Among other things, they contended that the CJ erred in law, and misdirected herself when she misapplied the doctrine of strict compliance by holding that such compliance is related to the contents of the Affidavit of Service, instead of the filing of the Affidavit of Service in a timely manner.