GALLE, Sri Lanka (CMC) – West Indies will need some heroic batting on the fifth and final day if they are to win the second Test match and level the two-match series against Sri Lanka, after Dhananjaya de Silva’s undefeated 153 gave the hosts a commanding lead of 279 yesterday.

de Silva’s unbroken ninth-wicket 107-run partnership at Galle International Stadium with Lasith Embuldeniya also helped put Sri Lanka in the driver’s seat.
At stumps, they ended day four on 328 for 8, giving West Indies the most runs a side has ever had to chase to win a Test match in Galle. Sri Lanka won the first Test by 187 runs.

West Indies coach Phil Simmons admitted that it would be a challenge, saying “98 overs tomorrow and a score in region of 300 runs to get on a wicket that is turning…is going to be a difficult one”.

“de Silva batted well and controlled the game really well. The wicket wasn’t really ragging as much as we thought it would and he made a superb hundred. The pitch still looks to be good. When it’s rolled tomorrow, we will see how it looks tomorrow when we come back.

Some days you have to appreciate when someone plays well and acknowledged that. We bowled well and were kept in the game, and we were energetic in the field, but he played well,” he added.

Overnight batsmen Pathum Nissanka (21 not out) and Charith Asalanka (4 not out) had faced West Indies spinners as play began on the penultimate day, with Sri Lanka resuming on 46 for 2 and trailing by 3 runs.

Nissanka struck the first boundary of the day in the third over to take his team to a half-century. But Veerasammy Permaul claimed his first wicket of the innings, bowling an outside off delivery, which spun in nicely, and sent Asalanka back inside for 19. 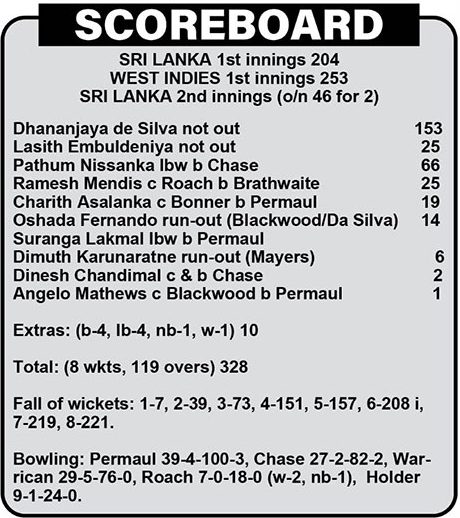 Nissanka was then joined by de Silva who struck his first four off Permaul but was dropped the next ball after adding just 5 runs to the score – a missed opportunity that would come back to haunt the Caribbean men.
Nissanka and de Silva continued a good run that resulted in a 78-run stand and the two looked set to take the side to the lunch break. However, the opener was dismissed by Roston Chase on 66.

In the post-lunch session, the hosts lost Dinesh Chandimal early for 2, with Chase dismissing him caught and bowled. In the same over, de Silva reached his fifty.

He found an able partner in Ramesh Mendis and the two went on to eke out a crucial partnership of 51, pushing Sri Lanka’s total over 200 before Mendis was caught on 25 by West Indies skipper Kraigg Brathwaite.
Sri Lanka then lost the wickets of Suranga Lakmal and Angelo Mathews in quick succession.

A few overs later, de Silva and Embuldeniya took their side to tea at 238 for 8 with a lead of 189.
West Indies got no more wickets in the final session. de Silva went on to bring up his eighth Test century and had a second reprieve when he was on 116 when Permaul dropped him off his own bowling.

With full support from Embuldeniya, who was playing defensive, de Silva led Sri Lanka’s charge, taking his brilliant knock over 150. His 153 came from 259 balls with 11 fours and two sixes.
Embuldeniya stood firm to accompany his partner till the end of day four. He was 25 not out off 110 balls.

Sri Lanka skipper Karunaratne said no decision had been made about when to declare.
“Maybe we will try to give the bowlers a bit more cushion. Just checked with the two batters and they were saying that it is not too tough to bat. We are on top now and we can put them under pressure,” he said.

Permaul had the best bowling figures of 3-100 off 39 overs to follow up his five-wicket haul in the first innings, and Chase had 2-82 off 27 overs.

Staff Reporter
IPL 2022 likely to start from March 27
Sabalenka, Halep through to Australian Open fourth round
The capital city on the brink of enhancement
Physiotherapy versus COVID-19
Understand Leprosy and show more kindness
View All