Background
THERE is a notion that with the implementation of the Amaila project and the gas-to-energy project, Guyana may have excess supply of energy which, in turn, might result in these projects becoming unprofitable at some point in the future. In this regard, a certain media house even attempted to compare Guyana to Ghana, which is a country that reportedly experienced similar problems with excess supply of energy using natural gas. This was questioned recently in the context of Guyana reaching out to that country (Ghana) to learn from its experience and to help Guyana on several matters in the petroleum sector, including the gas-to-shore project. However, Guyana is unlikely to be in a situation like that for two reasons:

1) Ghana is producing less than 100k barrels per day, whereas Guyana will ramp up production to as high as a million barrels per day by the end of the decade. Think of the welding and fabrication, heavy industrial activities, growth in Shorebase facilities etc., and the overall increase that will be required in the oil and gas support services value chain that will be needed for this level of increased production; and

2) The govt has already signaled that it intends to position Guyana as an energy exporting country.
Current Situation and Major Projects in the pipeline 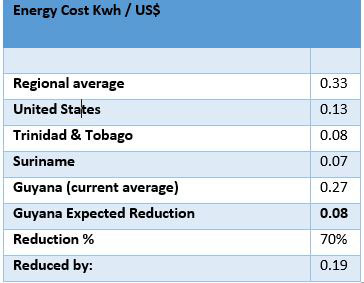 * Looking at the financials for two major manufacturing firms, DDL and Banks DIH for example, assuming that their energy cost is about 30% of their operating cost: * The savings that can be obtained between two of the largest manufacturing firms alone in five years could amount to about US$140 million or 2.5% of today’s GDP.

* In the case of DDL non-current assets in 2020 stood at $21.3B. Therefore, it can be said that 70% reduction in energy cost can result in an annual savings of about $3 billion and over five years amount to approximately $15 billion which represents 71% of the firm’s total non-current assets (2020). What this essentially means is that DDL can use that savings to finance future expansion by over 70%.

On a macro level, to ascertain what it means for the entire economy, both the private sector firms and households – lets look at GPL’s total revenue to have a better macro sense of the impact:

* In 2012, GPL’s revenue was about $29B, so maintaining the same level of Y-O-Y growth, current revenue for GPL should be anywhere around $50B – $55B. Hence, a 70% reduction in energy cost nationally would result in a reduction of about $38B annually, over five years this would be approximately $190B or about 17% of today’s GDP.

* $190B is about US$911M which means if the cost to build the hydro is US$700M, the amount of money that the country saves in energy cost in five years owing to a 70% reduction will be far greater than the cost to finance the hydro power project. This level of savings in turn can be reinvested in the economy at the firm level and will result in an increase in disposable income at the household level–thus, the project makes financial and economic sense to pursue for the economic benefit of the country, especially in terms of improving national competitiveness.

Demand Forecast Assumptions
* Demand will be driven by two things: (1) the development trajectory of the country on the economic front wherein the economy is going through a period of economic transformation and structural transformation and (2) increased spending power: the spending power of the people will increase (sixfold) on two fronts: (1), savings on their energy cost for both households and firms and (2) as the value of the production output in the economy increases resulting in double digit growth of GDP, driven by the oil and gas sector, per capita income will move from US$5,000 pre-oil production to approximately US$30,000 by 2030.

* As such, people will spend more on consumption, install more modern electrical appliances such as air condition units, they will work harder, earn more, have more places to go and more things to do, hence more consumption of energy for example, microwaves, iron, washing machines etc., at the household level.

* Then there will be a high influx of remigrants, expatriates, and tourists, 50,000 new households coming on stream, a stronger and more competitive manufacturing sector.

* Investment in both public and private infrastructure is another factor that will drive the growth in energy demand.

Altogether, these are the factors that will drive the demand for energy and adequately justify or explain the level of growth in the demand forecast.
Energy Consumption Per Capita Relative to Per Capita Income:

Summary
The implementation of the Amaila hydropower project, together with the gas-to-energy project, will no doubt bring to bear immense economic benefits to the country in terms of substantially improving national competitiveness.

In view of the growth trajectory and economic transformation of the country, even with these two major transformational projects in the energy landscape in the pipeline, these may not suffice over the long term as there will still be a shortfall of close to some 300 Mwh by 2030. This means, more energy projects would need to be implemented to fill that gap over the long term.

With respect to private sector firms, 70% reduction in energy can essentially translate to firms becoming more competitive and having the ability to pursue growth and expansion strategies in double-digit – that is by 10%-15%. This level of potential growth of the balance sheets of private firms is significant when compared to the current situation with energy cost just below the regional average of US$0.33, the average balance sheet growth is in the lower single digit – that is, 5% and less than 5% in some cases.