–following signing of $577M in contracts

THREE contracts, amounting to over $577 million, aimed at supplementing the developmental trajectory and modernisation of the Cheddi Jagan International Airport (CJIA), were awarded on Wednesday by Minister of Public Works, Juan Edghill.
The signing of the contracts paves the way for the construction of two new office buildings, which will house a number of facilities and staff, and facilitate necessary repairs and the construction of a new taxiway. The works are to be executed against the backdrop of the CJIA modernisation project which is being executed by the China Harbour Engineering Company (CHEC).
Edghill, speaking at a simple signing ceremony, on Wednesday, said that the government took a decision to do additional works at the facility, following a request from the management of CJIA. On Wednesday, Kallco Guyana Incorporated signed a contract valuing over $513.7 million for the construction of an office building, which will be joined to the existing terminal building.
The new facility will house a conference room, offices for airlines and other supporting agencies, and a duty-free bond.
In addition, Colin Talbot Contracting Services signed a contract valuing over $38.3 million to conduct repairs to the international apron and to build a taxiway.
Lastly, Kalitech Incorporated signed a $25.9 million contract for the construction of another office building to house CJIA’s 280 employees. 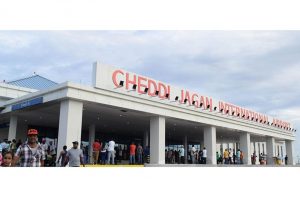 The new office building intended to house employees, would create more space in the terminal building for commercial purposes.
All projects under those contracts were allotted a four-month deadline for completion. To this end, Minister Edghill told the contractors that he expects work to commence immediately and be completed within the stipulated timeframe. As has been the case in the past, the airport will be operating amid ongoing work. So, for this reason, the projects must be well coordinated and integrated to stay within project time and costs. “We don’t sign contracts and sleep. I expect tomorrow morning work begins … this is the airport … we’ve got to work within a context of a functioning airport … we can’t be on this project forever because once you’re working on runway ‘Charlie’ you are going to be in the way somewhere along the line of what is happening,” he said.
Kallco’s Managing Director, Arvin Kalloo; Colin Talbot Contracting Services’ Managing Director, Colin Talbot and Kalitech’s Managing Director, Kalyan Tiwari all registered their commitment to completing the projects by their respective deadlines.
Also present at the signing ceremony was CJIA’s Chief Executive Officer (CEO), Ramesh Ghir, who opined that the additional works will supplement the work that is already being done at the airport.

“We have some remedial works to do. As minister pointed out, we are actually in the peak season; the airport is very busy so these works have to be timed in such a manner that it doesn’t affect aircraft operation,” he said. The initial airport project was conceptualised and initiated by the PPP/C administration in 2011, but works were halted when the A Partnership for National Unity + Alliance for Change (APNU+AFC) assumed office in 2015. The then government also made some drastic modifications to the project, deviating from the contractual agreement between the PPP/C government and the contractor. Five years later, when the PPP/C returned to power in August 2020, it made every effort to revert the project to its original specification, and after months of being at loggerheads with the contractor, the government managed to strike a compromise to have the expansion restarted as originally intended.
In June this year, Edghill, following a meeting with CHEC officials, had reported that CHEC has made significant progress with the overall CJIA expansion project, and it was on track to meeting its latest December 31, 2021, deadline.
The installation of the $200 million Instrument Landing System (ILS) a precision-approach aid for pilots, installed along the airport’s runway, was also completed and tested in June last.