President Ali told the gathering that his government has been pursuing an agenda that focuses on improving the welfare and prosperity of all Guyanese.
“We have rolled out a number of programmes that seek to improve the living conditions, creating opportunities for every segment of the Guyanese population to advance and achieve their dreams and aspirations,” the President said. 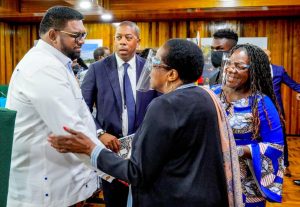 He also pointed to the government’s programmes in place to ensure that the vulnerable sections of society are not left out of the country’s development agenda.
He said that over the last year, his administration has been “aggressively” building on its promises after a protracted struggle for democracy following the March 2020 Elections.

“I want to thank the United States of America, and I know many of you would have played a part in ensuring that we remained on a democratic pathway so that the rule of law and democracy won at the end of the day. It was a struggle that all Guyanese embraced; it was a struggle that the Diaspora supported,” the President related.
He said that it now rests on the collective shoulders of all stakeholders to ensure that Guyana never repeats its post-elections experience.
President Ali used the opportunity to point out that the resources from the oil and gas sector will be used as an impetus to build and fortify other sectors of the economy.
The BEA delegates said that they were grateful for the opportunity to meet with the Head of State and members of the Cabinet and to have the opportunity to engage in the conversation around diversity, inclusion, equity and justice, specifically as it relates to black entrepreneurs and those of African descent.

“We are grateful that you have commissioned efforts that will unify your administration’s efforts to not only bring attention but to bring resources to your business owners; so, thank you,” Frasier said. The BEA currently has 300 registered members in Guyana and 300 in the United Kingdom (UK) chapter.
The association highlighted that it is committed to creating a blueprint for black-owned businesses, which creates generational wealth while transforming the business economy and community. The representatives also said that they are offering their services in guidance to entrepreneurs when it comes to foundational strategies and processes within their businesses.
They expressed interest in collaborating with the government to achieve their objectives and create the necessary mechanism to support businesses development.
“So, part of this process is yes, we are concerned about how to get access to opportunity, but we are also aware that we have a responsibility to bring people to the table that can help us support the businesses here.

“That is why you see a lot of businesses around the table, and we will continue to bring and engage the diaspora in terms of what can be done … for me I want you to understand it’s not just about what the government can do for us, we are taking an active and proactive role in making sure that we are ready to implement and activate once an opportunity is identified … so it is a two-way street,” Mollison of the Guyana- Georgia Tourism and Business Authority related.

BEA SUPPORTS ‘ONE GUYANA’ VISION
The group also called attention to the ways in which the BEA can contribute to the functioning of the “One Guyana Commission” by lending their professional expertise from their “talent pool” to address the priority areas and realise projects and programmes.
Representatives also praised the Head of State for his Emancipation Day message.
Several concerns raised by the BEA representatives focused on the functioning of the One Guyana Commission, the President’s stance on reparations and addressing cohesion.
President Ali assured them that his government understands the potential that exists within the diaspora, pointing out that it is a forward and backward relationship that will create the important linkages.

He said that a part of the government’s agenda, even before the elections, was a consultative approach to development.
“We will definitely find a vehicle, a mechanism through which we can build off of this initial meeting and continue the collaboration to see how we can develop opportunities for collaboration and partnership. We don’t really define our policies by black, brown, white…. Our policy is to ensure that all of Guyana benefit,” President Ali said.
He assured the delegation that they are pushing at an open door in the sense that government intends to continue to create policies and programmes that will help every segment of the Guyanese population in every sector, and has already demonstrated this through many sectors, including housing, agriculture and policy formulation.
He also encouraged them to become part of the national consultations, including Local Content consultations, to share their ideas to be taken into account in policy formulation.
Following the lengthy engagement, President Ali indicated that the meeting was the first step to future collaborations with the group.

Also making remarks were Prime Minister, Brigadier (Ret’d), Mark Phillips, who reiterated that the government’s policies are geared towards oneness and reaching all Guyanese.
In his remarks, Vice-President, Bharrat Jagdeo provided a historical overview of the political dynamics in Guyana while he outlined the objectives of the formation of several committees and their role in addressing rights agenda, addressing the needs of vulnerable groups and ensuring accountability. He also expressed interest in working with the representatives of the BEA and their membership. Several other cabinet members attended the meeting, including Senior Minister in the Office of the President, with responsibility for Finance, Dr. Ashni Singh; Minister of Public Works, Juan Edghill; Minister of Foreign Affairs and International Co-operation, Hugh Todd; Minister of Tourism, Industry and Commerce, Oneidge Walrond; Minister of Labour, Joseph Hamilton; Minister within the Ministry of Public Works, Deodat Indar and National Security Adviser, Gerry Gouveia