IN keeping with the government’s commitment to improving the lives of residents across the country, the Ministry of Housing and Water on Thursday signed a contract for the construction of a $51 million multi-purpose facility at Section ‘C’ Turkeyen.
Based on the specifics of the contract, the facility will be a 26’ X 50’ reinforced concrete structure, with an open view deck and bleachers, open ground-floor space with washroom and changing room facilities, tiled floors, and wheelchair access ramp.
There will also be a basketball court, a play area with swings, see-saw, slide and round climber. Among works to be done are the raising and landscaping of the playground, and the installation of electrical fixtures such as lighting and outlets, fire prevention and emergency lighting, solar-powered flood lights and walkway lighting, and a new fence around the elevated ground.
The contract for this “milestone project” has been awarded to Doodnauth Construction and Supplies.
Minister of Housing and Water, Mr. Collin Croal, at a simple sod-turning ceremony on Thursday, said that this initiative is significant, since it is the single largest investment on a community facility by the Housing Ministry.

This, he said, is a clear indication of the government’s commitment to providing the residents of Sophia with opportunities for a better life.
“These activities are being undertaken because of the government’s commitment to making all communities better; to making the lives of all citizens better,” Minister Croal said. “Many of our citizens now, as we speak, are faced with flooding because of the increased rains; we are battling COVID-19, and there are other challenges that were face. But I promise you that your government is doing everything possible to ensure that we bring relief to you,” he added.
Noting that the interventions taking place in Section ‘C’ Turkeyen are not by chance, as the government has carefully taken into account the needs of all communities, inclusive of the area at reference which falls within the Sophia neighbourhood, Minister Croal said it will continue to work to ensure that the residents of the community benefit from access to critical infrastructure, enhanced mobility and safety, strengthened capacity, urban services and overall improved living conditions.

He said that over 900 residents from Sophia were consulted on the proposed project, so as to ensure that the programmes match the needs of the community. 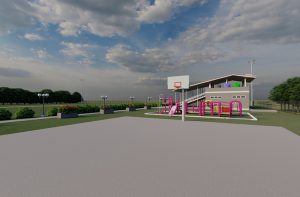 Following those consultations, about 75 residents have gained employment with the Ministry of Housing, in that they have been offered work on all the ongoing projects it has within the community. As Minister Croal explained, the ministry has a policy wherein at least 30 per cent of the labour required for any project must come from the community within which it is being executed. Since the meeting, Minister Croal said, a community-based monitoring committee has also been formed.
Minister within the Ministry of Housing Ms. Susan Rodrigues, who noted that Sophia has always had a special place in her heart, said this project is especially important, as it directly touches the lives of the residents by providing them with improved access to resource centres that can be used for their further development.
She said that Sophia, like any other community, is in need of a safe space where children can learn, as well as watch their talents and gifts grow, in a common environment that is easily accessible.

“This will not only improve the look of the community, but it will also enrich and enhance the lives of those who live here,” Minister Rodrigues said, adding: “When we talk about building sustainable communities, this is what we mean by that. While we try to allocate house lots, we are trying to build neighbourhoods. We’re trying to build communities, so that you can raise your children, and they have a clear play area that they can go to; that there are ‘green’ spaces; that there is access to healthcare facilities; that there is access to schools… All of these things go into building sustainable communities, and give you an improved standard and quality of life.”
She said that the government is committed to working with vulnerable communities to improve access to not just facilities and education, but also to sustainable jobs.

On the issue of jobs, Minister Rodrigues said that Sophia is in line to benefit from the ministry’s $20 million Community-based Employment Stimulation Project (CESP), which seeks to create block-making jobs in several vulnerable communities in four regions, and was recently piloted in Tiger Bay, at a cost of $3.9 million.
“It speaks to a larger conviction that we have as a government to be able to reach out to vulnerable communities, when you look at our job-creation project, now community-based employment project, as we have with the block makers, Sophia being one of the communities that we have selected to participate in employment simulation project,” Minister Rodrigues said, adding: “The most satisfactory thing that we do in office is being able to touch lives, being able to improve people’s lives, being able to make an impact, so that you can see your life change in a real way.”