THIS past week, Guyana celebrated its 55th anniversary as an independent nation. As always, our independence celebrations are an opportune time for us to think about where we are as a nation and how we want to collectively move forward.

This year, I find myself trying to wrap my head around the frequent headlines of Guyana’s “unprecedented” era of development and cast my worries and anxiety aside about what challenges or issues could possibly accompany our development. There is no doubt that there is this buzz in the air, signalling that Guyana is poised for great transformation, but the disproportionate impact of the COVID-19 pandemic alone illustrates how vulnerable we remain.

And so, to try to make sense of what is happening, I opted to see a bit of what it was like 55 years ago when we started this developmental journey as a new nation. Thankfully, the Guyana Chronicle’s archives remain a rich, but underappreciated, source of history. 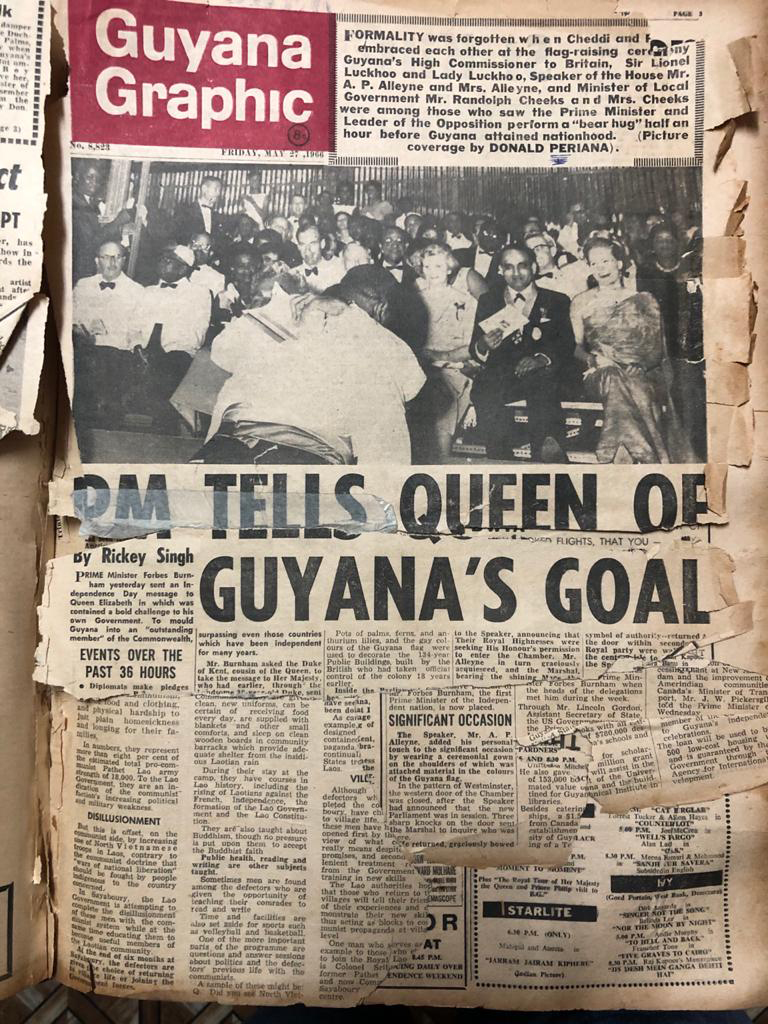 Coverage in the Guyana Graphic illustrated that in the days leading up to us gaining nationhood, there was much pomp and celebration-understandably so. Foreign dignitaries came to celebrate alongside the local leaders who worked to herald in independence, while it appeared as though each Guyanese felt as though they were part of something much bigger than themselves.

The headline for the Guyana Graphic newspaper on May 26, 1966, was: “Zero hour and then we’re free.” It was indicated that at the stroke of midnight, the nation of Guyana would be born and it would become the 23rd member of the Commonwealth of nations after 350 years of Dutch and British rule.

The reports of what happened on Independence Day were published in the May 27, 1966 edition of the Graphic (because that is how newspaper coverage works). Most of the page was missing (I suspect intentionally torn out by some individual who wanted to keep that bit of history for themselves), but Guyana’s goal as articulated by then Prime Minister Forbes Burnham, and as reported by Rickey Singh, was: “To mould Guyana into an outstanding member of the Commonwealth, surpassing even those countries which have been independent for many years.”

Personally, what was more important to me than this nod to the monarchy was the awkward yet beautiful photo on the front page by Donald Periana. It was a photo taken from behind of two men hugging; their faces were not discernible, but a crowd of people looked at this embrace in awe. As per the photo caption, it was Dr. Cheddi Jagan and Forbes Burnham embracing one another just half an hour before Guyana gained its independence.

Greater detail on this embrace was provided on page four. According to the author, Jerry Daniel, “As the clock ticked off the momentous minutes which brought Guyana to a new day at midnight on Wednesday, the nation saw Prime Minister Forbes Burnham and his bitterest rival, Dr. Cheddi Jagan, Leader of the Opposition, embrace each other to the tumultuous applause of thousands who thronged the Independence Square…”

These two men are hailed as the founding fathers of Guyana, and though different groups of people have different feelings towards them, they both had an indelible impact on the achievement of independence. And I think it is important to recognise that on that momentous occasion, despite the violence and strife in the 1960s, there was a nod to some bit of unity from these men.

Nowadays, Guyana is still a place that has not realised the national motto of ‘One People, One Nation, One Destiny.’ By and large, I believe, we have not achieved this because we have not yet fully grasped the opportunities presented to us to achieve a semblance of national healing and perhaps, real reconciliation.

We hope that Guyana will realise this unprecedented development it is expected to achieve, but I genuinely do not believe we can realise this without learning that we each have a role to play in creating that ‘better Guyana.’

Our leaders do not need to hug each other (and they shouldn’t, because of COVID-19 and all) but, at the very least, I hope that they can work with each other towards the noble pursuit of developing Guyana. It is not unimaginable or unachievable, I hope.

Vishani Ragobeer
Health authorities to increase testing for COVID-19 in hinterland regions
Teleperformance to increase staff complement to 1,200 by year end
‘We will get to the bottom of this’
U.S. tech company mulls bringing ‘green’ water infrastructure to Guyana
Region One has highest rate of child abuse
View All