A FEELING of gloom hung over the beautiful house as he rang the doorbell.
The housekeeper answered, a sad look on her face and she said quietly before Alvin could ask, “She’s in the garden.”

She was standing by the water fountain, staring at nothingness and he stood for a while watching her before quietly calling her name, “Marissa.”
She turned and he inhaled deeply upon seeing the deep grief on her face, before she bent her head, trying to fight back the tears. He had to be strong, even though he too was grieving because much depended on him and touching her shoulders, he said comfortingly, “You can cry.” 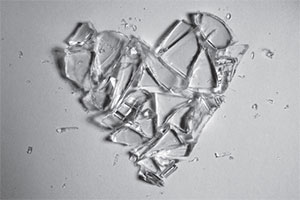 She looked at him, her lips trembling and leaning her head on his shoulders, she cried, the shock of her loss and the sadness flowing with the tears. He put his arms around her until her crying subsided and they sat there silently for a while in the garden.
“Did you know anything about his illness?” Alvin asked her after her emotions had calmed down a little.

She shook her head, “No. I knew he wasn’t too well because of the special diet he had to follow but I had no idea it was so serious.”
“Maybe, he didn’t want you to worry.”
“I know, he was always so caring, but now he’s gone what do I do?” she started to cry again.

In comforting her, Alvin understood now why in his dream his father asked him to take care of her. The shock had shaken her so much, she hadn’t the mental strength to deal with the sudden tragedy. The housekeeper called to say the children had come downstairs and she dried her tears as she walked up to the house. Alvin watched a little curious as she embraced the two young boys.

“My two brothers,” she told him, “They’re all the family I have.”
“No mother and father?”
She sent the boys to the playroom before answering.
“They died the same night my eldest brother did.”

“How?” he asked, concern added to curiosity.
A deep sad look crossed her face as she answered, “Murdered.”
He looked shocked, not expecting to hear that and if his mind had been searching for an answer why she married a man so much older than her, he knew now it was for comfort and security.
The house phone rang before he could say anything and the housekeeper said to Alvin,

“People have been calling since last night to extend their sympathies, you may want to take care of them because the mistress is quite shaken.”
Alvin complied and after making sure Marissa was resting, he took immediate control of everything and in a few hours, all arrangements were in place for his father’s funeral. The family did not approve of what he did, thinking that Marissa should be left on her own but Alvin took a strong stance against their objections.

“This is not the time for hateful sentiments, it’s the time to support each other and the fact remains that she is his wife who had been sharing his life and I am his son. Why is it so wrong for me to help her?”
No one made any further comments and with Alvin’s calm composure and high level of responsibility, all plans went smoothly at both homes, for friends and family to extend their sympathies until the final day.

It wasn’t a day Alvin wanted to remember, not for the grief, sadness and deep regrets. Three days after the funeral he could still hear the sounds of Marissa crying and see the grief on her face.
“What would she do now? How do I lend her my support without my family’s objections and society judging me because she was my father’s wife?”
Uncertain and confused, he prayed, “Lord, if there is an answer, please help me find it.”
The answer came two days later when the lawyer who had drawn up his father’s will called the family. The details specified what he bequeathed to his three children and his second wife. But what was of more importance was the letter he left for Alvin.

The letter stated,
“Son, I am sorry I did not play the role of a great father in your life, but sometimes we fall short of expectations. The divorce that broke our family was because of my refusal to accept my faults, arrogance and selfishness. I realized a few years after you left how wrong I had been but it was too late for reconciliation, my family had moved away from me. I wondered each day what I can do to make up for my mistakes then one tragic night, my Brazilian business partner in gold mining, his wife and eldest son were shot and killed in the interior. Their deaths left a young daughter and two little sons alone in the world.

What do I do to help?
I brought them to my home for security and comfort until the daughter could manage on her own but the world is not such a safe place for a young girl with no family. I became protective, not wanting her to fall into the wrong hands that could cause harm to her and her two brothers. So after much thought, I made an arrangement with her so society can believe we were married. My reputation as a fearless, no-nonsense man was like an invisible bodyguard for her anywhere she went.

Son, it was just a legal arrangement so she could be secure and have some rights. I owed that to her father and to myself because I had lost my own children. I had no intimate relationship with her, she was like a daughter to me. When I got diagnosed with cancer, I did not tell her to drive fear in her heart but I was thankful she was there to take care of me.
When I saw you after ten years, I felt so proud of the kind of man you had become and I knew in my heart, you were the perfect one for her. If you can love her and share your life with her then I know I would have done the ultimate good, and my soul will rest in peace.
– Dad”

A shocking revelation!
He couldn’t hold back the tears and only then did he cry, for the father he never truly knew – a man who turned stones of arrogance and selfishness into gems of kindness and compassion, and the selfless sacrifice he made for a murdered friend’s children.
Alvin folded the letter slowly, putting it in his pocket and he took a few deep breaths to compose himself.
The complexities of life – his father’s dying wish for him to love the one he had thought could not be his, the one he had fallen in love with the moment he saw her.
She was alone in the living room of the beautiful house that was now hers, and from the puffiness of her eyes, he knew she was hadn’t yet stopped crying. He took the letter from his pocket and opening it, he handed her.

“I just received this from my father’s lawyer.”
She looked a little scared, not sure what it was about, but when she looked at him, after reading it, there were fresh tears in her eyes.
“Why didn’t you tell me?” he asked her in a quiet tone.
“Would you have believed me?”

He shook his head, “I can’t believe he changed that much.”
“He was a good man,” she said, tears now streaming down her face, “He took good care of us when we lost our parents.”
Alvin sat down beside her and wiped her tears, “You have to stop crying.”

She leaned her head on his shoulder and for a while they sat there in silence, then he asked her,
“Do you still think I’m a unique person you liked?”

She raised her head and looked at him, a soft light dancing in her hazel eyes, “More than ever.”
They had found love from within the broken pieces of the past, and now a new love story would begin.