“It’s not the mountains we conquer, but ourselves.” – Sir Edmond Hillary

Where are half of the world’s biodiversity hotspots?

Where are one-third of plant species found?

The answer: mountains!
A mountain is a large landform that rises above the surrounding land in a limited area, usually in the form of a peak. A mountain is generally steeper than a hill. A group of mountains is called a mountain range, for instance, Himalayan and the Rocky are mountain ranges. One-tenth of the world’s people live in these mountains. Now you might be asking yourself, especially if you live on the coastland, what does this have to do with me and why are mountains important? Well, December 11 was International Mountain Day, a day to celebrate the rich biodiversity in mountains as well as to address the threats they face. Given that 2020 has been the year that has made us pause and re-examine our relationship with the natural world, the theme for this year is ‘Mountain Biodiversity’. As you might recall, biodiversity speaks to the variety of life on Earth, and mountains due to their location and temperature, boasts not only spectacular landscapes; the 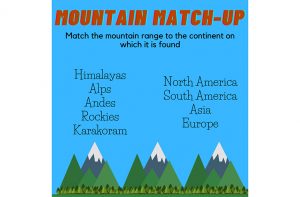 biodiversity is often rich and endemic (species that are found exclusively in a particular geographic area). In fact, the UN-FAO reports that mountains host half of the world’s biodiversity hotspots. Why are mountains important?  Mountain environments cover some 27 percent of the world’s land surface and directly support the 22 percent of the world’s people who live within mountain regions. Lowland people also depend on mountain environments for a wide range of goods and services, including water, energy, timber, biodiversity maintenance, and opportunities for recreation and spiritual renewal. Mountains provide for the freshwater needs of more than half of humanity, and are, in effect, the water towers of the world.

Climate change, unsustainable farming practices, commercial mining, logging and poaching all exact a heavy toll on mountain biodiversity. In addition, land use and land cover change, and natural disasters, accelerate biodiversity loss and contribute to creating a fragile environment for mountain communities. Ecosystem degradation, loss of livelihoods and migration in mountains can lead to the abandonment of cultural practices and ancient traditions that have sustained biodiversity for generations. The sustainable management of mountain biodiversity has been increasingly recognised as a global priority. Sustainable Development Goal 15 target four is dedicated to the conservation of mountains’ 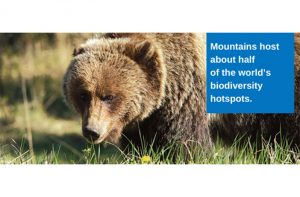 biodiversity in consideration of its global relevance. Biodiversity in all ecosystems is in focus, as the United Nations has declared 2021 to 2030 the UN Decade on Ecosystem Restoration and governments prepare to negotiate the post-2020 global biodiversity framework for adoption this year at the 15th meeting of the Conference of the Parties (COP 15) to the Convention on Biological Diversity (CBD).

* Japan is the only country that has a public holiday on Mountain Day.

Mountains in Guyana
Mountains are a beautiful sight to look at; Guyana is a land that possesses many eye-catching mountains. The highest mountain in the world is Mount Everest reaching 8,848 metres in height. There are 156 mountains in Guyana; the highest peak is Mount Roraima at 2,809 metres. These mountains can be found in the highland regions like Cuyuni-Mazaruni, Potaro-Siparuni and Upper Takutu-Upper Essequibo.

Did You Know?
The main mountain range in Guyana is the “Kanuku” Mountains which separate the North and South Rupununi savannahs. It can be see all the way from Brazil and is a protected area by law!

Staff Reporter
Guyana, UAE strengthen relations
20.2 million barrels of oil produced during first half of 2021
Pupil with cerebral palsy performs well at NGSA
Best-performing Guyanese law student admitted to the bar
Sugar will live on and progress under this government
View All