‘CREOLE’ is an enveloping cultural reality that does not deny the old world sense and memory of self. We are all we identify ourselves to be from the prototypical continental centres of our bloodlines, of rites and rituals and what we believe were their original beliefs. We can as individuals and groups dangerously live in two worlds, the mind on one the body in the other, or we can navigate the all that we are, be in control of the romantic voices of our dreams and comprehend that the ‘Creole’ is the colonising regimen of the universe we live in.

Creole means born outside, or away from the place of origin. It’s believed to be a Spanish word in reference to distinguish at first, between Europeans born in the then colonies, as from those born in the Euro-home lands, but with time the meaning was modified and extended first to also mean Africans of mixed heritage , then Africans born or raised (like Kofi) from childhood from captive Africans brought into slavery, then further to embody the culture of fusions that occurred in the colonies of the New World as the Americas became more confident in its separate identity the cultures and life crafts that grudgingly evolved from the talents of its diverse peoples, despite the fact that they did not all share common liberties. The process of creolisation would then incorporate nations, and national identities that define strict protected expressions of novel cultural nationhood. 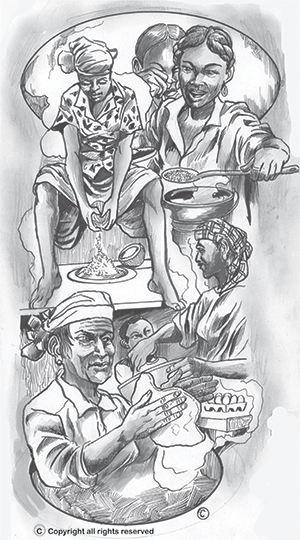 Guyana has never really delved into the ethnography of who we are as a people, to our disadvantage. Politics imposed itself on our intellectual, artistic and social perceptions with subtle dictates, and resistance to our aesthetic evolution. Thus the term Creole has become subject to diverse interpretations that fail to capture the ‘Identity’ of its meaning, from the processes it evolved from, that truly can define ‘the all’ that the term embodies. A significant example is the religions that were involved in the era of the Trans Atlantic Slave Trade. The European-adopted Christianity clashed against the religions of the high cultures of Mesoamerica and Africa.

Though Christian narratives were used as a justification in the launch of the Slave Trade and the devastation and pillage of the Mesoamerican civilizations, it petered off and the sole intention of commercial gain remained in the forefront. But this occurred between events of the genocide of native tribes, the savagery of slavery and constant battles between European nations, coupled with slave rebellions, maroon insurrections and a little unknown realisation that many of the Pirate ships were also manned by Africans who had rebelled against slavery. Within the 300-odd years that such turbulent events had become normal. The exchanges of ideas, food, rhythms and belief systems were not left out, as it was in other human timelines, such trade of ideas persisted, Christianity, African and Mesoamerican beliefs merged.

Thus the proverbial ‘Wuk man’ as the spiritualist is called in Guyana is neither Obeah man, Warlock, Voudon Priest, nor Shaman, and with Indentureship, the Hindu factor was added to the melee, thus, he is ‘All’ and his diversity of spirits are accepted by those who subscribe to his or her craft. With the music, we must recognise that the term creole is more an array of descriptions in several dictionaries and books of literature and has been replaced by identities within national borders, but though it has ceased to be the analogy of identity used, the process itself has morphed into cultural normalcy that identifies with other rhythms within a creolised historical process, whether they are the sounds of Sergio Mendes’ Promise of a fisherman or Nina Simone doing ‘I put a spell on you’ or the Rhythmaires interpreting Sohani Rath for the dance halls of Guyana and to add Roberto Delgado’s immortal ‘Whiskey & Soda.

It amounts to the common acceptance of a rainbow landscape of rhythmic expressions that belonged to the mass vibe of the Americas and ‘Guyanese’. The acceptance of the definition is expressed with authority through the casual colloquial term ‘Creole fowl’ against them fancy chicken, that does feed from bag. Creole eggs are natural; ent got chemicals like dem other egg. Translated, it means creole is ‘homegrown’ stronger, of the soil, creole fowl invokes village, the wake-up crow of the fowl cock fore day morning, also common in certain areas of old Georgetown, a nostalgia of identity. But the process of creolisation also invokes the clash of sensibilities of diverse peoples, through its savage genesis of plantation slavery, the colonisation of souls with its social/caste dictates of master and slave, Christian and heathen, but the unmanageable construct of the creole entity forged on.

Human passions rudely violated the pretentious nature of the plantation, then with shame, the guilt of contradiction and finally with the realisation that birthed grudging reconciliation with nature’s course, the plantation and its philosophers added new false contentions of hierarchy and disdain against what stared back at it from the mirror, the human variations of the holistic creolised plantation, demanding a final resolution with its cultural reality, a conflict that somewhat still is officially kept alive, eventually towards its final ramification. We in Guyana have never paid attention to racism in Latin America, but Latin American racism has lasted longer in the- Southern North American state- than the whole of the northern Americas itself. One profound reality is however retained, that strange enough, though the cross of Christendom governs most of Latin America, it is the Gods of Africa that captured the imagination of its spirit and defiantly rule.

Creole is a culture, a way of thinking, senses and vibrations that have anticipated responses; It’s beyond a race, if you are born in the Americas, you may indoctrinate your people to their own shame, as is done on one half of an island in the Caribbean, elsewhere yearn for a pristine identity beyond the seas. But as awe creole brethren from Jamaica did sing “Yuh running, and yuh running, and yuh running away, but yuh can’t run away from yuh self” and that is the final engendering.