SENIOR Minister in the Office of the President with responsibility for Finance, Dr. Ashni Singh, on Monday, outlined the government’s plans to utilise its oil revenue to diversify its non-oil economy into a globally competitive one, and to invest in citizens to create a suitably equipped and skilled workforce in line with the current and future demand for new sets of skills.

The British officials were led by the British High Commissioner to Guyana, Jane Miller.

According to a press statement from the Ministry of Finance, besides its introductory purpose, the meeting served as an opportunity for the British team to discuss with the minister how the United Kingdom could partner with Guyana to increase mobilisation of development support, as the government continues to create a number of international partnerships to catapult its current development agenda.

“Notwithstanding the commencement of oil production in Guyana and this illusion that there is windfall revenue, we still feel strongly about utilising as much development support as we can,” Dr. Singh said to the UK officials, noting that Guyana values its longstanding relationship with the UK.

The senior minister said that the government plans to ensure that revenues earned from Guyana’s oil and gas sector, will be used to lay the foundation for the future. 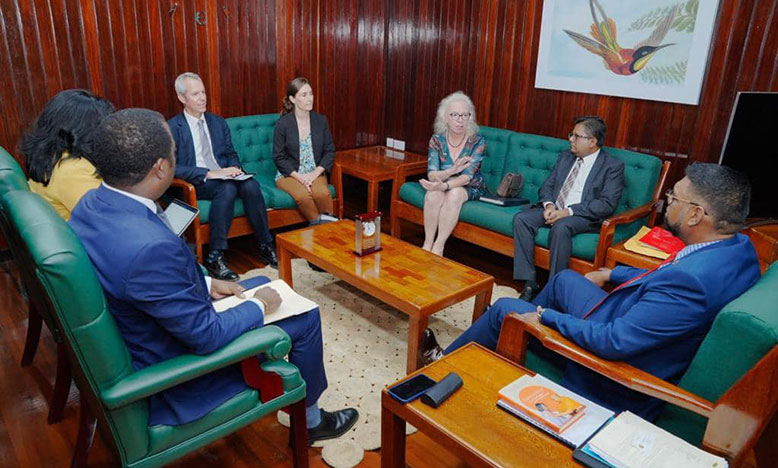 Specifically, it will be used for developments in agriculture, transport infrastructure (for improved access to productive land and to improve access to continuous markets), energy infrastructure (to provide reliable and affordable energy as this would be important especially to facilitate a competitive manufacturing sector), physical infrastructure such as roads, bridges schools and hospitals, and for investments in people to ensure that they are adequately equipped with the skills to meet new demands.

Dr. Singh also said that the government intends to fully capitalise on its Low Carbon Development Strategy (LCDS), and will continue to manage Guyana’s tropical rainforest in a sustainable manner in order to be compensated by the world for its forest conservation and clean air contribution.

The minister also touched briefly on Guyana’s Sovereign Wealth Fund, which he reminded, comprises the oil proceeds being put aside for future generations.

He added that along with this, the government wants to ensure the improved well-being of Guyanese by allowing for them to have their own homes, access to education and have marketable skills and careers in a diversified economy where they can continue to thrive as well as be provided with modern health care even after the country’s oil would have been exhausted in the future.

Guyana and the UK have been collaborating on a number of development projects. Recently, the UK Caribbean Infrastructure Fund provided US$66 million toward the US$190 million Linden to Mabura road project.

Additionally, through the UK Export Finance (UKEF), the Government of Guyana is constructing a Paediatric and Maternal Hospital. The building and equipping of the state-of-the-art hospital will cost 149 million pounds.

Meanwhile, Co-operation programmes/projects between Guyana and the UK also include the Diamond Diagnostic Centre, the Lethem Hospital, the Leonora Cottage Hospital, the Mabaruma Hospital and the Paramakatoi Hospital.

Through collaboration between the two countries as well, earlier this month, Guyanese are now able to visit the UK visa-free.

President, Dr. Irfaan Ali had stressed as well during the announcement of this waiver on visas that the two governments aim to further expand bilateral relations with the hope of furthering investments, including expansion of Guyana’s tourism market.