In the second scenario, the financial forecast model assumes an average price $70 per barrel while the assumptions for the other variables remain the same as in the base case scenario. The results, as demonstrated in the graph below; gross revenue is forecasted at $205B of which government’s take is approximately $63.4B or 31 per cent up from the $48B or 28 per cent in the base case scenario and the oil companies’ take is an estimated $55.2B or 27 per cent. Therefore, the higher the price and lower the operating cost which is very possible outcomes given Guyana’s low-cost operating environment, the higher would-be Guyana’s Take as well as the net take for the oil companies.

Explanation of the Base Case Scenario Financial Model Assumptions

The base case scenario of the analysis conducted herein takes into consideration the project economics of the four approved projects separately, then the findings were amalgamated.
• Fiscal framework in the PSA:

• Profit oil split between the government and the oil companies are as follows:

OTHER ASSUMPTIONS
• The average price used in the base case scenario is $60.
• Operating expenditure (OPEX) for Liza 1 using FY 2021 actual figures was 42 per cent.
• OPEX for the other projects is likely to be relatively constant at 30 per cent (maximum) or 12 per cent (minimum) throughout the productive life of the projects. This is on account of a relatively low-cost environment owing to Guyana’s light and sweet crude coupled with the technology employed by the oil companies that aid in achieving greater efficiency. 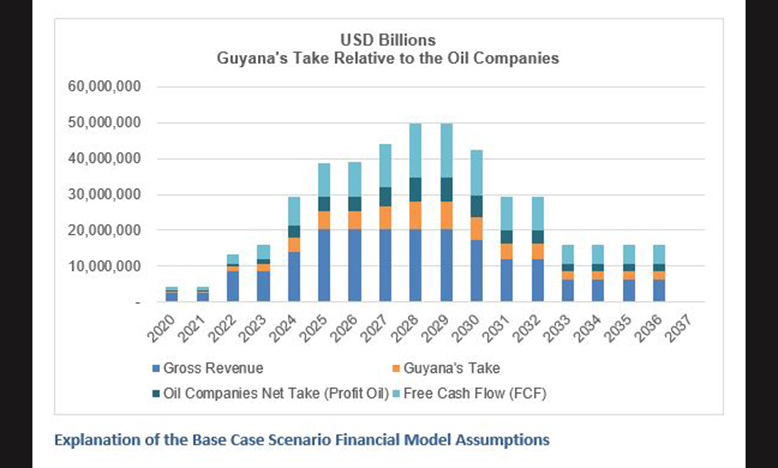 • A discount rate of eight per cent representing ExxonMobil’s weighted average cost of capital (WACC).
• As the Development / Capital Cost is recovered, Guyana’s Take as a percentage of the gross revenue is expected to increase from 14.5 per cent to 37 per cent.
• The 75 per cent cost recovery ceiling is split 30 per cent for OPEX and 45 per cent for recovery of capital cost.
• To determine the payback period for the invested capital using the rate of capital cost recovery, the payback method formula was used in the calculation.

BENCHMARKING OF THE INTERNAL RATE OF RETURN FOR GUYANA’S OFFSHORE PRODUCTION
The IRR is the discount rate that makes NPV of a project zero. It is the expected compound annual rate of return that will be earned on a project or investment.
The base case financial forecast model across the four approved projects for Guyana generated an average IRR of 22 per cent. Comparing this with the average IRR for oil and gas fields in the US for 2019, the average IRR with subsidies for oil and gas fields is around 40 per cent as illustrated in the graph below, and without subsidies the average IRR is approximately 25 per cent. In both cases (with or without subsidies), the IRR is higher in the US than the average IRR for Guyana. 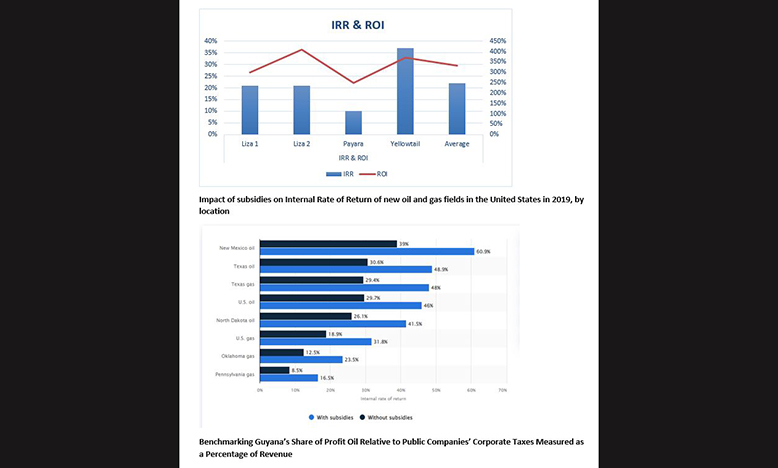 The reality is such that, however, given that in the US oil and gas activities are heavily subsidised, it is therefore prudent for the purpose of this comparison to look at the average IRR with subsidies which is substantially higher (by 18 percentage points) than the average IRR for Guyana. This is an extremely important perspective to consider contextually against the notion that Guyana’s PSA is overly favourable towards the oil companies and less favourable to Guyana.

Impact of subsidies on Internal Rate of Return of new oil and gas fields in the United States in 2019, by location

Having established that the Government’s share of profit oil at a rate of 50 per cent is also a form of tax paid to the State and wherein it was shown that the corporate tax rates for companies under the regular taxation regime is lower than the 50 per cent profit oil for Guyana; it is worthwhile to test this notion by way of a comparative analysis.
With this perspective in mind, table 2 above illustrates a comparison of the corporate taxes paid by three of the largest publicly traded companies in Guyana (two local companies and one regional financial institution) relative to their gross revenue, namely: Demerara Distillers Limited (DDL), six per cent; Banks DIH Limited, eight per cent and Republic Bank (Guyana) Limited, 17 per cent. 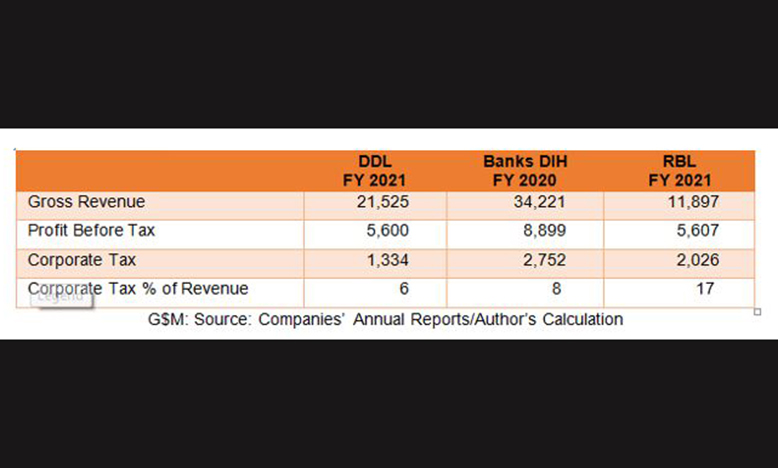 In the case of DDL and Banks DIH, the corporate taxes paid by these companies represent six per cent and eight per cent of revenue respectively, which is less than the 12.5 per cent Government’s Take from the oil revenue. And as for RBL, eventually when the capital costs are fully recovered, Government’s Take in profit oil will be much higher than 17 per cent.
The comparison demonstrated in this section is merely to contextualise and validate the argument that Guyana’s 50 per cent profit share from the oil revenue is much higher than the corporate taxes paid by any local or foreign companies operating Guyana that are subject to the regular corporate tax rates.

CONCLUDING REMARKS
The analysis conducted herein under a conservative base case scenario shows that Guyana is poised to earn close to US$5B annually when the four approved projects are producing concurrently by 2025 through 2030 at 810,000 boe/d across the four projects. Further to note, Guyana’s Net Take in royalty and profit oil is higher than the oil companies after capital costs are fully recovered and operating expenses deducted / recovered. Guyana’s share of profit oil will also increase relative to the gross revenue when the capital costs for all of the developments are fully recovered owing to relatively low operating costs of 12 per cent- 30 per cent of revenue.