HAVING the right fiscal regime will be the most important factor if Guyana is to get the most out of the sale of its remaining oil blocks at the upcoming auction that the country has scheduled for the third quarter of 2022.
This was the opinion shared by Senior Vice President and Head of Latin America for Rystad Energy, Schreiner Parker, during a press conference on Wednesday at the boardroom of Sagacity/OilNOW.

Parker explained that even as the country looks to get optimum prices for the blocks, Guyana will have to ensure it does not ask for too high prices on the oil blocks or it could scare away investors.
“It’s going to come down to the fiscal terms… What is going to be important is that the fiscal regime represents the fact that these are still exploration blocks and that companies do have to come and invest monies,” Parker commented.

Rystad Energy is an independent energy research and business intelligence company providing data, analytics and consultancy services to clients exposed to the energy industry across the globe. Schreiner has been working with Rystad since January 2016.

According to Parker, Guyana stands to gain much out of the auction, given the attractiveness of the basin, due to the success of the Stabroek block; however, that’s not to say that the country could not lose out if conditions are not favourable for investors. He believes that finding the right equilibrium will be crucial.

“The expectation, and what we would probably see, is that the fiscal regime will be more favourable to Guyana, but it’s a matter of getting that right. What is the sweet spot?
“What’s more favourable but not to such an extent that you scare off potential investors because [they] can’t make the economics work [if] the government takes [them] too high,” Parker noted. 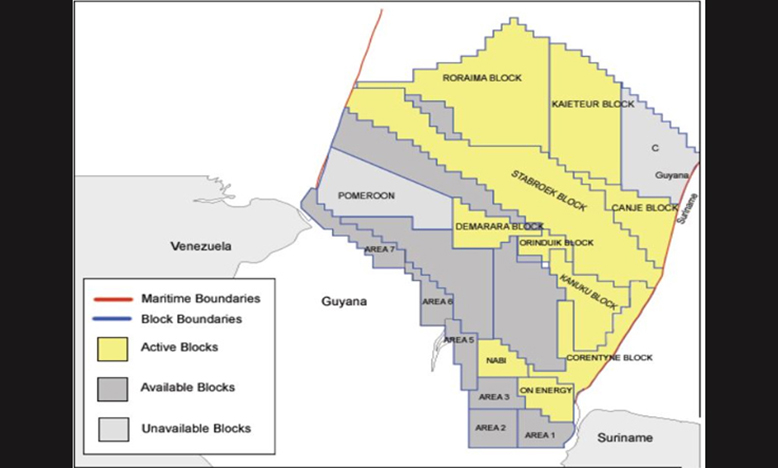 Parker pointed to neighbouring Brazil as an example where such a case played out, noting that despite good prospects, Brazil eventually scared away investors due to the terms that were offered.
“In recent years, they have had unsuccessful bid rounds. Even though Brazil is an extremely important source of offshore production globally, they were unable to attract the interest that they wanted because the fiscal regimes were too onerous and they were asking for too much,” Parker said.

“So the balance that Guyana is going to have to strike on these new blocks is understanding that we’re no longer going to have the Stabroek [block] fiscal regime that’s done and over, we are a petroleum province,” he remarked.

Guyana currently has an estimated recoverable resource of 11 billion oil equivalent barrels in the Stabroek Block, which is currently the country’s only oil producing block.
The block is owned by ExxonMobil, which has 45 percent stake, in partnership with Hess (30 per cent) and China’s CNOOC (25 per cent).

ExxonMobil is also the operator of the Canje and Kaieteur Blocks offshore Guyana. CGX, together with Frontera Energy Corporation, operates the Corentyne and Demerara blocks, and also has a share in the Berbice block.
Due to the accelerated development of the Stabroek Block, Guyana has gained massive attention for its oil finds.

Currently, exploring companies have made more than 30 discoveries in the Stabroek Block with two projects, the Liza Phases One and Two, already producing a combined 360,000 barrels per day.
Two other projects, the Payara and Yellowtail are currently scheduled to come on stream in 2023 and 2025, respectively.

However, notwithstanding the massive success of the Stabroek block, and great potential of the other blocks, there has not been much successful commercial discoveries outside of the Stabroek block.
What is important to note, Parker emphasised, is that the oil blocks are exploratory blocks which will require major capital investments, which is why, he believes, government should be cautious with how much it asks for.

“We can’t expect that its guaranteed success that every hole that’s poked into the ground is going to produce oil, so getting that fiscal regime correct is going to be paramount for attracting interests from oil and gas players globally,” Parker related.

“If the fiscal terms are right and they incentivise explorers to come and invest capital here then I think that Guyana is one of the hottest stories in international oil and gas right now and there’s a lot of appetite to come here,” Parker said.

As pertains to the government potentially carrying out its own three-dimensional (3D) seismic surveys of the blocks to better evaluate their value, Parker said that would not essentially be necessary taking into account the attention Guyana is already receiving.

“Something like that could be of interest, but, at the same time, the story is so hot here in Guyana and everyone is really interested in this country; you may not have to do that type of pre-work to have interested parties,” he said.