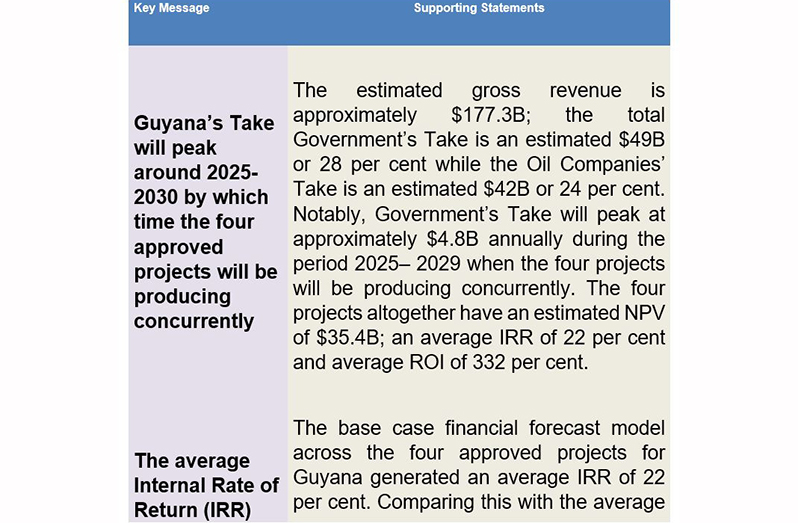 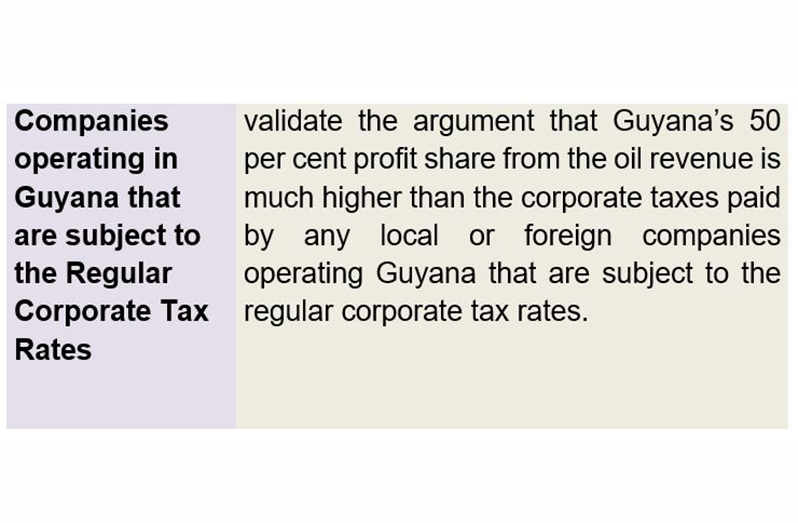 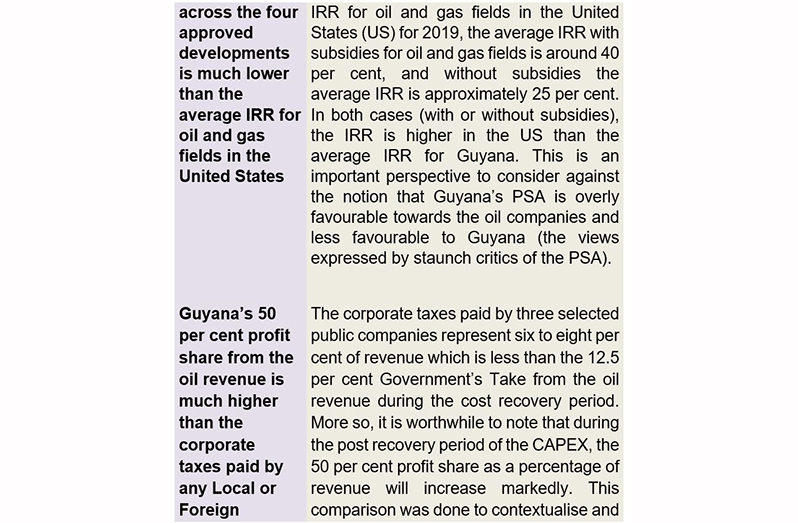 The corporate taxes paid by three selected public companies represent six to eight per cent of revenue which is less than the 12.5 per cent Government’s Take from the oil revenue during the cost recovery period. More so, it is worthwhile to note that during the post recovery period of the CAPEX, the 50 per cent profit share as a percentage of revenue will increase markedly. This comparison was done to contextualise and validate the argument that Guyana’s 50 per cent profit share from the oil revenue is much higher than the corporate taxes paid by any local or foreign companies operating Guyana that are subject to the regular corporate tax rates.

Background
Reference is made to two letters carried in the Stabroek News editions of July 5th and 7th 2022 by Professor Kenrick Hunte, former Ambassador and Mike Persaud, respectively. Professor Hunte wrote in reference to an analysis conducted by SPHEREX Analytics on the financial statements of Esso Exploration and Production Guyana Ltd. (EEPGL), Hess and CNOOC. Professor Hunte argued that the notion that Guyana’s net-take of 14.5 per cent will increase above this level after the initial investment of the oil companies is recovered, is false hope. Professor Hunte further contended that to support his view, the 14.5 per cent take that Guyana currently gets is enshrined in the Production Sharing Agreement (PSA). However, Professor Hunte failed to cite the specific section that states this in the PSA. The reason for his inability to show the evidence of any such clause in the contract though is because it does not exist.

The other letter by Mike Persaud essentially concur with the arguments put forward by Professor Hunte.

Article 11 of the Production Sharing Agreement (PSA) speaks to cost recovery and production sharing which can be found on page 26 of the contract where, specifically, it states the following:

11.2 All recoverable Contract Costs incurred by the Contractor shall, subject to the terms and conditions of any agreement relating to Non-Oil Associated Gas made pursuant to Article 12, be recovered from value, determined in accordance with Article 13, of a volume of Crude Oil (hereinafter referred to as “Cost Oil”) and/or Natural Gas (“Cost Gas”) produced and sold from the Contract Area and limited in Month to an amount which equals seventy-five per cent (75 per cent) of the total production from the Contract Area for such month excluding any Crude Oil and / or Natural Gas used in Petroleum Operations or which is lost.

11.3 To the extent that in any month, Recoverable Contract Costs exceed the aggregate value of Cost Oil and Cost Gas determined in accordance with Article 13 and / or Article 12, the unrecoverable amount shall be carried forward and, subject to limitation stipulated in Article 11.2, shall be recoverable in the immediately succeeding month, and to the extent not then recovered, in the subsequent month or months.

11.4 The balance of Crude Oil and / or Natural Gas available in any month after Recoverable Contract Costs have been satisfied to the extent aforesaid (herein after referred to as Profit Oil and/or Profit Gas as the case may be) shall be shared between the Government and the Contractor for each Field in the following proportions: Contractor fifty percent (50 per cent) and Minister (Government) fifty per cent (50 per cent).

As shown in relevant cited section of the PSA above, nowhere did it state anything about 14.5 per cent as suggested by Professor Hunte that is set in stone.
There is another important element on the treatment of cost recovery as mentioned in the clauses above that needs an interpretation and / or clarification. In this respect, reference is made to the section at 11.3 above where it states that:

“To the extent that in any month, Recoverable Contract Costs exceed the aggregate value of Cost Oil and Cost Gas determined in accordance with Article 13 and / or Article 12, the unrecoverable amount shall be carried forward and, subject to limitation stipulated in Article 11.2, shall be recoverable in the immediately succeeding month, and to the extent not then recovered, in the subsequent month or months.”

This does not mean that there will always be such an instance where the cost for a particular month exceeds the threshold and would have to be carried forward to the next month. This provision is in place to cater for rare occasions where there may be events in one month that would result in the cost exceeding the 75 per cent threshold, for example, it was reported in the first quarter report of the Bank of Guyana (BoG) that production from Liza one was paused to facilitate maintenance work. There is also another example with the flaring issue where EEPGL encountered problems with the gas compressor, resulting in the company having to unavoidably flare the gas and thus be subject to a flaring penalty.

It should be noted that to date, neither of the above-named commentators, professors and other professionals alike sought to perform a comprehensive analysis of the approved projects (except for international analytics firms such as Rystad). In so doing, this would inform their opinion from an evidenced based standpoint by employing some element of financial modelling techniques in the analysis. There is sufficient data that is publicly available for each project to derive the project economics of each field and which can be used to construct a financial model for the four approved projects so far, namely, Liza 1, 2, Payara and Yellowtail.

This article, therefore, seeks to present a comprehensive analysis of the four approved projects over the estimated life of each and collectively. The findings of the analysis demonstrate under a base case scenario what would be the payback period of the development cost and / or initial investment for each project, the future cash flows, profit and royalty which constitute Guyana’s Take and the Oil Companies take in the given scenario, the Net Present Value (NPV), Internal Rate of Return (IRR), Return on Investment (ROI) and other financial indicators. (To be continued)