NEW York City and surrounding areas were a ‘white out’ over the weekend. A major storm, delivering a massive punch of heavy snow and fierce knife-cutting winds, brought the Guyanese diaspora and the rest of the city to a grinding halt. The storm pummelled New York and neighbouring states on the north-east coast. It was dangerous and the governors of surrounding states declared a state of emergency, meaning people should not be outside unless they are first responders or in a critical job going to and from work.

Everyone in the path of the snow was affected. Guyanese grabbed shovels and hand-operated mobile plow units to clear passageways blocked by the snow. A few youngsters were seen frolicking in the snow, which is an American pastime.

There were power outages in several parts of the city, though not in greater Richmond Hill or areas where the large Guyanese population of over half a million dwell.

Shops were shuttered virtually everywhere. Even public transport was affected, moving slowly with few overhead trains and buses running normally. Travelling was very dangerous and people were known to lose their lives from accidents, as well as to medical conditions that were worsened by the low temperature.

Some 3,500 flights were cancelled on Saturday as a result of the storm. The same was expected on Sunday as crews tried to clean airport runways, and the streets were virtually empty. As opposed to earlier storms, when children liked to play in the snow and make snow men, few children were outside. It was bitterly cold with sub-zero temperatures and harsh winds. Howling wind whips snow from one spot to another. And one could barely see anything beyond 100 yards or less. The wind drift piled the snow onto heaps, making cleaning difficult.

Warning about the dangerous conditions outside, the mayor appealed to residents to stay indoors. The only people out were those cleaning snow around midday on Saturday as the storm eased its powerful punch. TV stations carried live broadcasts of the snow and transportation difficulties and of snow plows grading the snow to the sides to make it possible for emergency vehicles to get to the sick and disabled.

LOW VISIBILITY
There were blizzard-like conditions in parts of the city; visibility was very low and winds were exceeding 35mph. The city’s sanitation department worked through the day and all through the night to make streets passable. Normalcy in the city is not expected until Monday. The good news for the city is that the snow came on the weekend. And Monday is a holiday for students as the city celebrates the Chinese New Year (Lunar). Tuesday is also a holiday for secondary school students – the end of the first-term of the school year that is used as a staff development day for teachers to reflect on the past half year and plan for the next half. 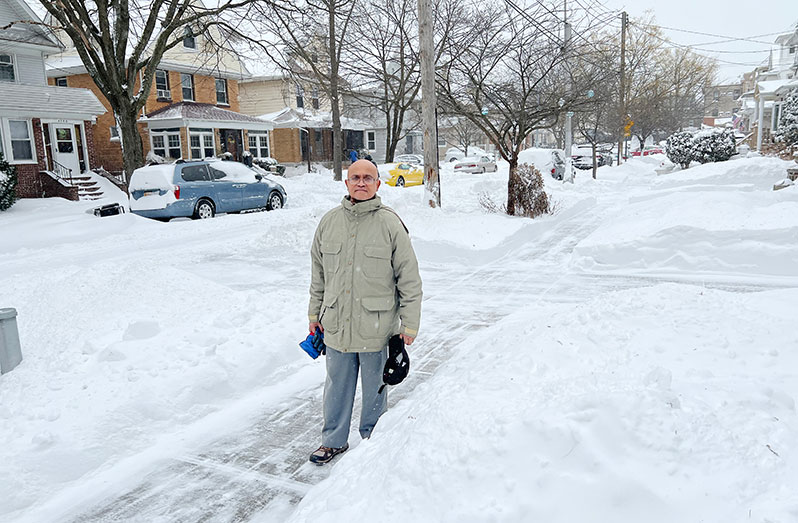 The snow storm brought back memories of drying and milling paddy using ‘wooden gangaram’ and ‘scrapers’ to spread out and heap the paddy. Speaking with Guyanese homeowners who came out to clean snow, this writer was told that in this storm, shovelling the snow was somewhat easy. It was not wet and heavy, but soft and fluffy to move.

“It is the law. I have to clean the snow to create a passageway for people to walk”; “I do what I have to do as it is God’s work”; “We got clobbered”; and “It will take sometime for me to dug out. I don’t like the snow. I don’t like the cold winter. I prefer to be in Guyana, but I don’t have a choice,” were some of the common reactions from Guyanese.

MULTIPLE TIMES
Their major problem was shovelling multiple times because the wind blew the snow right back after they had cleaned the sidewalks and driveways. Also, the snow plows pushed snow to the right side of the streets in front of driveways, forcing home-attendant cleaners to shovel snow again and again.  New York City law mandates that homeowners are responsible for cleaning sidewalks of snow and garbage. Homeowners are fined for failure to maintain a safe passage for passersby. Thus, almost every Guyanese owner in the Greater Richmond Hill area was observed shovelling snow. Some were seen with hard coconut brank brooms sweeping the snow clean from the pavement and from their front porches.

Some 70 per cent of Guyanese households in Queens own their own private houses with a majority owning multiple-unit dwellings and some owners of several buildings that are rented. They are responsible for cleaning the snow on the pavement around their buildings. As the temperature drops, the snow compacts and hardens into thick layers of ice. It is very difficult to clean. Temperature is expected to remain below freezing until Tuesday.

The city has been in a deep freeze since Friday evening. Freezing temperatures and blowing snowfall complicated efforts to clear the roads on Sunday. Guyanese homeowners were seen shovelling snow in front of their homes early Sunday morning as the sun pierces out. Guyanese shopkeepers were also seen cleaning in front of their stores and sprinkling calcite salt to melt the snow, as they prepare to welcome shoppers after a dull Saturday. Everyone was seen bundled up in heavy, multiple-layered clothing with head gear and gloves to stay warm.
The snowstorm was expected to blow into the Greater Toronto area Sunday morning to give the diaspora there a nice treat.