ONE week after pleading not guilty to the gruesome triple murder at Black Bush Polder in July 2016, Jairam Chetram called “Ryan”, on Monday, decided to change his plea and confess to the brutal crime.

Jairam, along with his father, Carlton Chetram called “Lieman”and two of their employees – Tameshwar Jagmohan called “Guana” and Rakesh Karamchand called “Go to Front” –  are on trial before Justice Sandil Kissoon at the Berbice High Court before a 12-member jury.

During his court appearance on Monday, Jairam opted to plead guilty to the capital offence of murder.

The three charges were reread to him and he admitted that, on July 21, 2016, at Mibicuri Creek Savannah, Black Bush Polder, he murdered Pawan Chandradeo, 37, called “Suresh” and “Jug Up”; his son Jaikarran Chandradeo, 16, called “Kevin” and his brother-in-law Naresh Rooplall, 35, called “Teeka Bai” and “Mice.”

The matter has been adjourned until February 10, 2022 for presentation of the probation report and sentencing.

Meanwhile, the trial against the three remaining defendants will continue before the jury on January 27, 2022.

The state is being represented by prosecutor Abigail Gibbs, while attorney-at-law Mursalene Bacchus, S.C., is on record for the four accused. 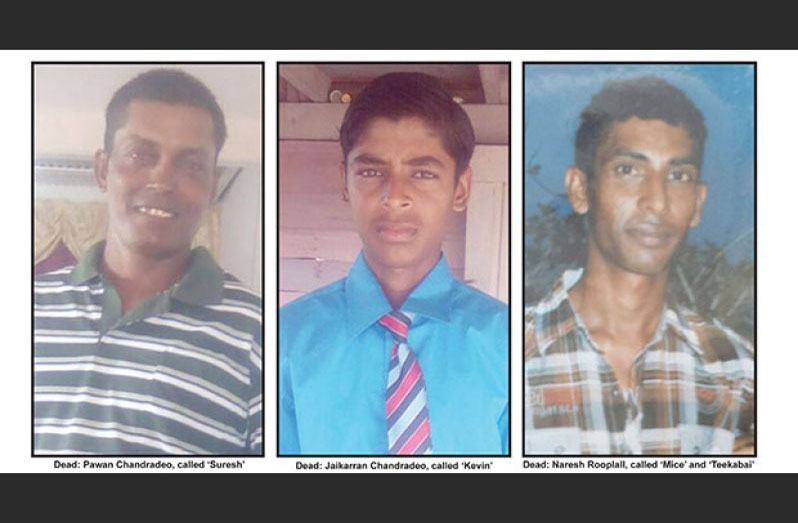 The Guyana Chronicle had previously reported that, on the day in question, the three victims had gone on a fishing trip in the Black Bush Polder backlands in an area called Cookrite Savannah, some three miles from Mibicuri, where they were allegedly gunned down by the quartet.

The men, each with a single gunshot wound, were found lying in a rice field belonging to Sudama Jagmohan, who made the gruesome discovery.

The youngest victim was found next to his father. He had a gaping hole to the back of his head and a ‘salt bag’ with fish and fishing net strung around his neck.

Rooplall’s body had a hole in the neck and the fishing net was strung over his shoulder, while the older Charandradeo had his fishing net in his hand.

It is alleged that the men, while on their fishing trip, stumbled upon “Lieman” and his crew who were allegedly stealing diesel fuel in the said field.

It was reported that Jairam, who was armed with his father’s firearm, fired two shots in the air and the fishermen ran towards the dam and fell. Jairam then shot the victims to their heads at point blank range.

When arrested, Jairam told police that he killed the men to get rid of the evidence. “Meh na been want leff no evidence so I shoot them,” Jairam had said in his caution statement to the policeman.