CENTRAL Government, the Guyana Defence Force and the private sector on Thursday commenced a massive clean-up exercise in the City. The exercise started in Drury Lane, Campbellville, Georgetown.

A post from President Dr Irfaan Ali’s facebook page said the exercise is being replicated across the country, municipalities and neighbourhood democratic councils (NDCs) and every citizen must do their part to ensure a clean environment.

The exercise, dubbed “Operation Clean Up”, is a collaborative effort between the Joint Services and the Private Sector, with support from the Ministries of Public Works, and Local Government and Regional Development. The campaign will see heightened activities involving Cabinet Ministers this Saturday and Sunday, January 15 and 16 across the wards of Georgetown.

Technical and manpower support are being provided by the Guyana Defence Force, the Guyana Police Force and other government agencies; with deployments across 13 locations including, Durey Lane, Cemetery Road, Hadfield, Sussex, Princess, Smythe and Durban Streets; Regent, Robb, Church, Camp and Sheriff Streets.

The “Operation Clean Up” coordinators are encouraging citizens residing in the targeted locations to join the campaign activities and for others to initiate clean up exercises of their own, for which support could be requested. President Ali had announced in his New Year’s message that his government intends to lead a national resurgence of sustained public cleanliness that promotes environmental health across the country, which goes hand-in-hand with the rapid developmental transformation already taking place. Guyana’s transformational agenda also focuses heavily on achieving a restoration of national pride and patriotism, even as the country coalesces towards a singular identity.

On the part of the private sector, the cleanup is a follow through from a commitment it has made. The commission had said that it will be partnering with the government in the cleanup exercise on January 15-16, 2022.

That release had also stated that the exercise will be done in collaboration with the Joint Service, the Public Works Ministry, the National Drainage and Irrigation Authority and the Solid Waste Management Unit.
The effort by the PSC is in response to a call from President Irfaan Ali for the commission to support the clean-up exercise. 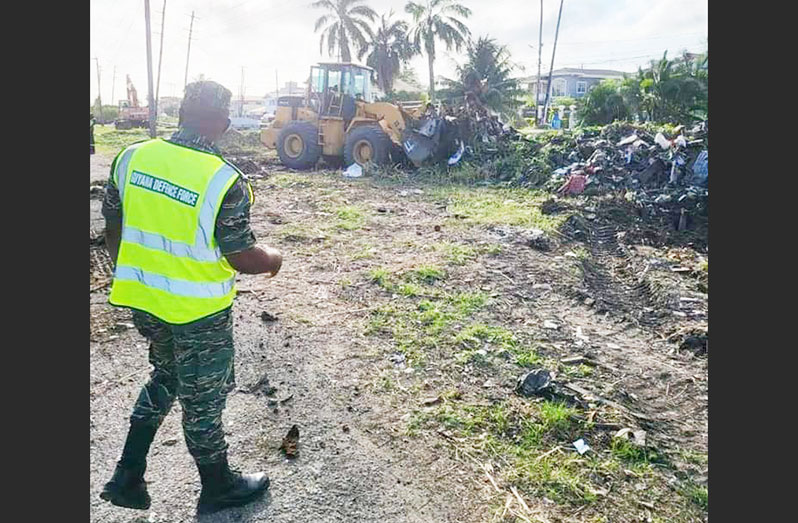 Staff Reporter
‘We are with you’
Shadick remembered as tower of strength, agent of change
Diaspora welcomes direct flights from UK
Government in discussion with airlines for direct flights to Canada
Water restored to Central Georgetown after major disruption
View All