Dear Editor,
OPPONENTS of the Natural Resource Fund (NRF) Act 20 of 2021 have referred disparagingly to this piece of historic legislation as a “thieving one” much to the astonishment of the government and many analysts. It appears that this resistance — whether real or staged — was prompted mainly because of an improper understanding of the structure and operations of the Natural Resource Fund. Some critics have even gone further by insisting that, under the existing NRF formula, the government would leave no funds for intergenerational equity and emergency.

While these assertions are misleading and could be dismissed as political polemics and platitudes, it is obvious that that the NRF funding formula is not properly explained and understood. Critics impute sinister motives to its design and operation. To allay their anxiety or fear, it is important that the NRF’s structural and operational rationale be explained also in the wider context of provisions of the NRF Act.

Raw data for this analysis allow for the computation of crude estimates on oil production and crude oil prices. These are neither Exxon nor government estimates, but they have been computed from information gathered from several sources. In computing estimates for the period 2022 to 2026, assumptions were made on oil production and oil prices. It is known that oil prices are volatile and are not always determined by market forces (supply and demand) but by strategic considerations. Certain assumptions were made in the computation of estimates. (I) the average price of crude oil is US$80 per barrel. (ii) There could also be equipment downtime: one day per month is calculated for this loss in production. (III) Guyana’s share of profit oil (12.5 per cent) is paid in oil; therefore, a cost (like freight, commission, etc) are incurred for the sale of oil. This factor is included in the estimates. (iv) In making these crude estimates due cognizance was given to the growing movement towards alternative sources of energy and the progressive reduction in the use of fossil fuels. (v) The government also receives funds for flaring but the amounts (though small) are not included. The table below provides an illustration on how the NRF fund works. 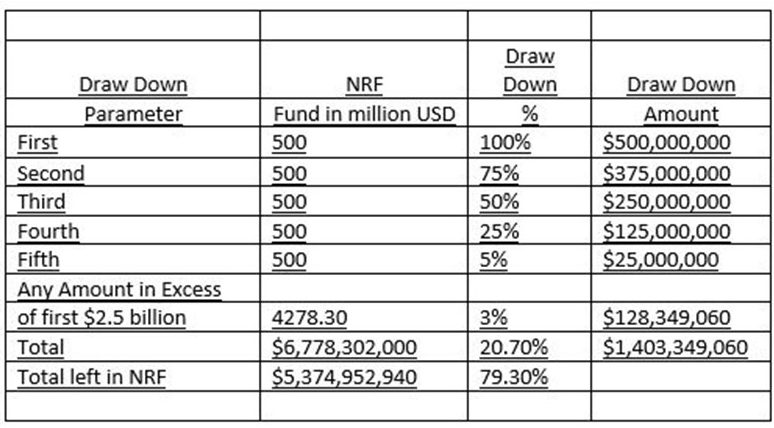 For a six-year period, 2022 to 2026, based on projected oil production figures, and at an average cost of US$80 per barrel, Guyana could earn US$6.778 billion, of which 18.5 per cent represents royalty and 81.5 per cent represents Guyana’s share of profit oil. Under the funding formula, the government could draw down US$1.403 billion (which represents 20.7 per cent of total oil revenues). Thus, contrary to the fear being expressed by critics, 79.3 per cent (or US$7,166 per capita) of the natural resource fund would remain in the Consolidated Fund for intergenerational equity and emergency. If oil prices rise and if production expands as projected, the total revenue will also increase, but if the opposite happens, the total revenue will decline. The US$18 million signing bonus was not included in these calculations since there is no information on the disposition of this fund. Also, the gas-to-shore pipeline is likely to be a private enterprise project, so this was excluded from the estimates.

Based on estimated production figures of 750,000 barrels per day from 2026 onwards, it would take over 30 more years for oil extraction to become depleted (by 2060). The estimates also indicate that Exxon and partners would have recovered (cost) of US$46 billion by 2026.

At a general information level, it is noted that once the cost recovery period (prospecting and exploration) ends, Guyana’s share of profit oil will increase substantially. (It was not possible to identify the cost recovery period). Finally, the main idea of this letter is to provide readers, including critics, with a better insight or understanding on how the NRF is structured and how it would work.
Yours sincerely,
Dr Tara Singh

Staff Reporter
Children hid as gunman reportedly entered Sophia home to murder father
Texas school shooting: Husband of killed teacher ‘dies of grief’
‘We must stand by her’
Four ‘tele-diagnostic’ centres to be established across Guyana
$10B invested in two years to enhance lives of Amerindians
View All