– innocently, a wave of reflections occurs, and purpose reassures itself

2021 was a year that was awakening in so many areas, but most significant was in the loss (death) of people I valued, in a world where the sincerity of respect and friendship is not abundant, that ‘value’ matters most. It was during the holidays when the clean-up was at its most furious pace in my home and had eventually reached my collapsed CD rack, and I had to dispose of CD music that had ceased to play. It appears that when the tech experts came up with the idea of the CD to replace the floppy disc, the cassette and before that the long play(LP) and 45 RPM records that had reigned from the 1940s on, with improvement changes, they could not foresee that the CD, regardless of the quality of its name-brand producer, would have a shorter shelf life than that of the original record. It was in that clean- up that my wife handed me a CD that was in the black, blank case. When opened, it was marked ‘Calypso’ on it. Instantly I remembered it. It was given to me a few years ago by my friend ‘Spragala,’ who passed the year of 2021. I put it aside, hoping it would play, since I couldn’t remember what was on it. New Year’s Eve, I tried the CD, and I was curious, and regardless of the calypso written on it, I even expected oldies as in a CD covers mix-up. The CD played and the voice of the Mighty Sparrow rose to the challenge. I came off my drawing desk and danced alone, but with the memories of times past, just a few hours from New Year’s Day. ‘Melda and the Obeah man,’ ‘Saltfish’ and more played. My daughter came over from her space. She had never heard ‘Sparrow’ before. She protested and then applauded, concluding that Sparrow’s lyrics were down right suggestive, but unlike some of the untalented smut that play on selected minibuses today, the Mighty Sparrow was a lyrical master, telling his story without pretensions, but crafting his grassroot poetry to shake the feet of any censor board. 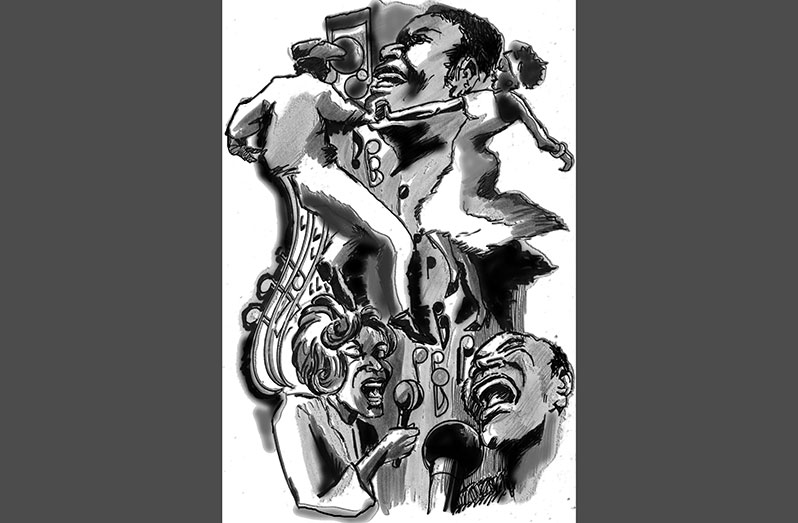 To each life experience, the archive of memory has a cosmic tone. Like the universe, music is a force of its own, embedded in the laws that govern life. Where did Sparrow take me as I moved to his music as the curtains slowly concluded 2021? My attention remained with my family, but slowly ebbed while travelling with the music, as it constructed a clear understanding of the struggles of the working-class childhood, where holiday gifts from tasks given meant you had held your part of the bargain to sand and polish Christmas furniture the right way, for delivery, and comparing the contradictions of adult gossip about the costs of the holidays, realising and still wanting to believe in Santa Claus, while knowing that every gift you tore open on Christmas morning had a patron, you called uncle or aunt, though they might not be related. Then Sparrow’s music-“Jane it is four o’clock in the morning, hear the neighbour clock how it crowing” the music of Boxing day in the days of short drill pants, “Jane gal, leggo meh damn hand, I ent ready yet, when ah dead ah done” yes Sparrow captured an era, in ‘Creole’ , ‘Patois’ and in standard English, like an old song on the same CD, to new ears, about an interracial love affair “Just because of our difference in completion, they say our love won’t last, but there happens to be no racial discrimination when two people fall in love” my wife remembered. But my offspring was dumbstruck, never heard it before. The technology of the day enhanced the evening, the music deh pon de smart phone, yuh know! And a flash back took me to a favourite beer garden that had a ‘Punch Box’ that we would venture in after school, under the scolding eyes of the owner, with a ‘bob’-(25-cent piece) to select three tunes at the punch box, enjoy, and not change the expected time to arrive at home, coupled with the branded exclamation of a popular patron smiling and flashing his gold teeth, as he announced, “ Hear Lyrics deh Lill Baii, lyrics!”

It is surprising how an outpouring of memories long filed away, could contribute to how one understands one’s environment. I am certainly not the only soul, drawn at select times, by melodies through the archives of music, and subsequently into other places, to be awakened to a collective awareness that somehow reaches further than the memory itself, that counsels one, that whatever the obstacles of the day, draw strength from the heritage foundations you stand upon.