THE pitter-patter of raindrops on the zinc roof and the steady droplets of water seeping through the holes, falling in bowls in the old shack, aroused a little girl sleeping on the floor.
“Another wrecked day,” she mumbled and crept out of the shack that was home in the city slums.

It’s never a good day when it rains and the wind blows cold, for the dwellers of the slums have nowhere else to go for warmth and comfort. They were a people who were simply ill-fated or who have had too many stumbles and falls in life, for different reasons.

No strong hands to hold and left for them were the crumbs the streets could offer.
“Sanya,” the little girl turned around to see her mother by the doorway, a poor, broken-spirited woman if ever there was one.
Her life had been so rough, the scars of her downfall were etched on her face. The child felt pity and sadness for the mother.
“We have no food,” she said to the little girl.
“What’s new?” Sanya said to herself.

Today, like every other day, once the rain stopped, she would go to the shopping areas, begging for money. But it was never enough to keep hunger away, for most of the money she brought home, was spent by her mother and step-father on alcohol. She had lived in the embrace of poverty since a toddler, eight years now, hunger, cold and discomfort still a depressing part of her life.
Sanya trudged along in the slight drizzle, the ragged clothes clinging to her thin frame, her feet kissing the bare road through her worn slippers. She stood under a little shade outside the roti shop and even though she was wet and cold, a little smile played on her face. It was a wet day like this when she had found the kitten, bedraggled and hungry. She had taken her in her poor home and named her Crystal.
The kitten was her first real friend. 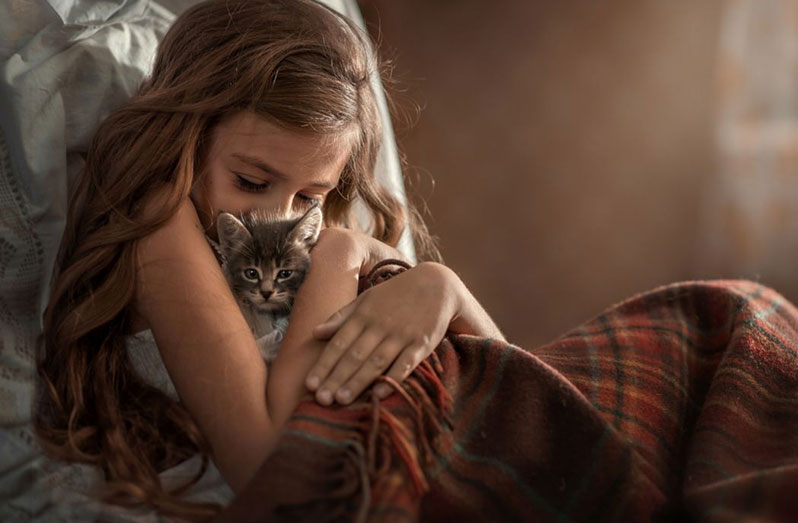 At night Sanya would sit outside, looking at the stars because she loved their twinkling splendour and from within her little heart, she always wished, “Twinkling little star, shine on me, so I can have a nice home that doesn’t leak when it rains, a warm bed for me and Crystal, and nice food to eat.”
Days followed nights, seasons changing and, in the streets, somedays when her feet were too tired, she would sit under the shade of a tree and sketch. She had a sketchpad, a kind lady at the bookstore had given her, and she realised that was something she was good at and loved to do. She sketched people, buildings, vehicles and the beautiful dolls in the store windows she couldn’t have. It was starting to look a lot like Christmas in the city with the spectacular lights, beautiful décor, toys and goodies. But in the slums, there were no lights and merriness.
Then something happened that changed the little girl’s life forever.

It was one of those quiet, dark nights when Sanya was jolted out of her sleep by gunshots. The sounds came from an alley behind the shack in which she lived, and creeping cautiously in the shadows, more curious than scared, she saw something that made her freeze in sudden fear.
Three well-built men in dark clothes, and guns in their hands were standing over two lifeless bodies on the ground. They spoke in low, heavy voices, then casually got in a black Toyota and drove away.
“Who do I tell?” she wondered, trembling a little as she crept back in her shack.
A short while later, she heard raised voices, all speaking at once, people running and the distant sound of police sirens getting closer. She curled up in her bed in a corner on the floor, hugging Crystal and closed her eyes to shut out the murder scene.

The next morning, it was all over the news about the execution-style killing of a popular businessman and business partner. Police, detectives and reporters swarmed the scene and dwellers of the slums were questioned about anything they may have seen. No one paid attention to the ragged little girl holding a kitten. She said nothing to anyone for she wasn’t quite sure they would believe a beggar child. She wanted, though to tell someone so the killers could be caught. She had been watching a young detective woman, impressed with the way she was doing her job. She had a serious look and her tone of voice was firm, but briefly she relaxed sometimes with a little smile and lesser firm tone, and the child felt drawn towards her.

Sanya walked up to her slowly and the detective woman seeing her, asked a little concerned, “Little girl, what are you doing here?”
“I live here in the slums with my mother and step-father,” she answered, and holding up the kitten she said, “This is my friend, Crystal.”
“Cute,” the detective said, patting the kitten’s head and looked at the child, noting her ragged condition.
She shook her head, sighing deeply, “This is really not good for children to live in such depressed conditions.”
“I have been here since I was little,” Sanya said.

The detective touched the child’s face with a little caring gesture.
“I will make sure something is done to give you and the others a better life.”
She came back the next day with bags of food and snacks for the children, and as Sanya happily ate the blessed food, the detective’s phone rang.
“Yes, sir,” she answered, “I’m here, close to the scene.”

She listened to the caller and then answered again, “No, sir, we have found no witnesses yet though everyone we spoke to heard the gunshots.”
She listened a little more before the call ended and Sanya noting the determination in the detective’s eyes to solve the murder, took her hand and said, “There’s something I need to show you.”
In her shack, she pulled her sketchpad from under her bed and handed it to her saying, “I like to do drawings.”
The detective flipped through the pages and said, “This is great, you have talent.”

She came to the last page and Sanya watched silently as she stared incredulously at the detailed sketch of a murder scene, face of the killers and their vehicle.
She looked at Sanya, surprised beyond words that this child was the witness the entire investigative team was looking for.
Several days later, Sanya watched the news from a store window of the killers’ arrest and the high praise for the detective woman. As she neared her home in the slums, she saw her mother standing by the doorway, and the detective waiting for her.

“You are the true heroine,” she said, “And I am here to tell you, you are getting a new home away from here, a good life, school and art classes. And a special invite for you to spend Christmas with me and my family.”
Sanya was so thrilled, she laughed with joy, hugging the detective.
A few weeks later, she walked out of the slums with her mother who had started rehab for alcoholism and leaving the cold and darkness behind that night, looking up at the sky, she said, “Thank you, twinkling star.”