FIVE years after the gruesome murder of West Berbice businessman, Doodnauth Arthur Rajkumar and his reputed wife, Dianne Chamanlall, their 24-year-old killer was sentenced to life in prison.

Earlier this month, Rafeek had pleaded not guilty to murdering Rajkumar, 81, and 49-year-old Chamanlall, also known as “Devi”, at School Dam, Bush Lot, between January 8-9, 2016.  However, as his trial ensued, Rafeek opted to plead guilty to manslaughter. 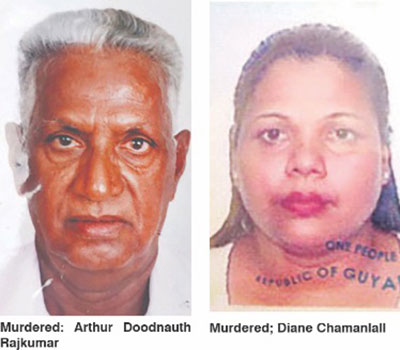 He was represented by attorney-at-law Mursaline Bacchus, while prosecutor, Abigail Gibbs, is on record for the state.

In his address to the court, Rafeek apologised for his actions but maintained that during the home invasion he did not kill the couple. He claimed it was the doing of his co-accused, Rooplall Abrahim, called ‘Vijai.’

After listening to Rafeek’s address, Justice Kisson said, “ I reject that as an attempt by you to mitigate your sentence. I also accept that as a further indication from you that you are without remorse or contrition. Your attempt is to simply obtain a sentence that is consistent to a slap on the wrist notwithstanding the gravity of your despicable act.”

While reflecting on the facts of the case, Justice Kissoon said the words, “brutal, savagery, immeasurable cruelty and unspeakable agony,” best describe the gravity of the criminal act of Rafeek and others who “ butchered” their victims.

He highlighted that if Rafeek was found guilty by a jury for the capital offence of murder, he would have been sentenced to the “gallows.”

While delivering his sentencing remarks, the judge said Rafeek was acting in a criminal enterprise in a premeditated design to obtain money criminally from unsuspecting citizens.

He said they armed themselves with a deadly weapon and snuffed out the victims’ life instead. The judge said that citizens must feel free to carry on with their daily lives without the fear of being attacked and robbed. He also said that the sentence of the court must not only fit this dastardly act, but should also serve as a deterrent for like-minded offenders.

The judge sentenced Rafeek to life in prison and he will be eligible for parole after serving 35 years.

During the plea hearing, Gibbs read Rafeek’s caution statement, which was taken the day after the couple’s murder. In that statement, Rafeek admitted involvement along with Abrahim and another friend, Madanpaul Gocoul, called “Clown.”

In his caution statement, Rafeek said that on the afternoon of January 8, 2016, he, ‘Clown’ and ‘Vijay’ met at Bush Lot, and together they planned to rob ‘Uncle Arthur’.

“Abee smoke up some ‘ganja’ weh Vijay bring, and abee feel nice… Meh had wan kitchen knife, and Clown and Vijay had one, one cutlass,” Rafeek was quoted as saying in his statement.

He told the police that after getting high, he and his two friends went “on de wuk”, by jumping the fence of Uncle Arthur’s home, and climbing onto his veranda.

According to reports, the couple was living together in the upper flat of a two-storeyed building. Rafeek and his cohorts allegedly broke in through a grilled door before opening a glass door.

While inside, the men went into the bedroom of the couple and woke them up. According to Rafeek, Vijay asked the couple for gold and money, but  Uncle Arthur said they did not have any valuables.

“Clown and Vijay then start to chop up Uncle Arthur and he wife wid a cutlass, and me cut dem up wid meh knife,” the accused said in his caution statement.

After making a thorough search for money, all they found of value were a few items of foodstuff and some cigarettes. Apparently incensed by their paltry find, Rafeek and his ‘buddies’ proceeded to chop the couple mercilessly, to the extent that each of them sustained no less than 20 deep incised wounds and multiple fractures.

The sudden arrival of the police at the scene caused them to hurriedly make good their escape by jumping over the back fence. It was during that escape bid that Rafeek dropped his hat, which was how investigators were able to pick him up a couple of hours later.

Rafeek was arrested at his Bush Lot home, and according to Prosecutor Gibbs, there were traces of blood inside his yard and home.

Gibbs said that according to a post-mortem report, the couple died as a result of shock and haemorrhage due to their injuries.