THE British High Commission, in partnership with the UK-based Cherie Blair Foundation for Women, ExxonMobil Foundation, and ActionINVEST Caribbean Inc., on Tuesday launched “HerVenture”, a business development app for women.

Cherie Blair Foundation’s Director of Programmes, Emily Scott joined the launch virtually from London.
In her remarks, High Commissioner Miller emphasised her enthusiasm to see initiatives geared at women empowerment.
“Gender empowerment is something that’s very important to me, personally. I’m the first female British High Commissioner here in Guyana, so gender issues are really important to me,” Miller said. 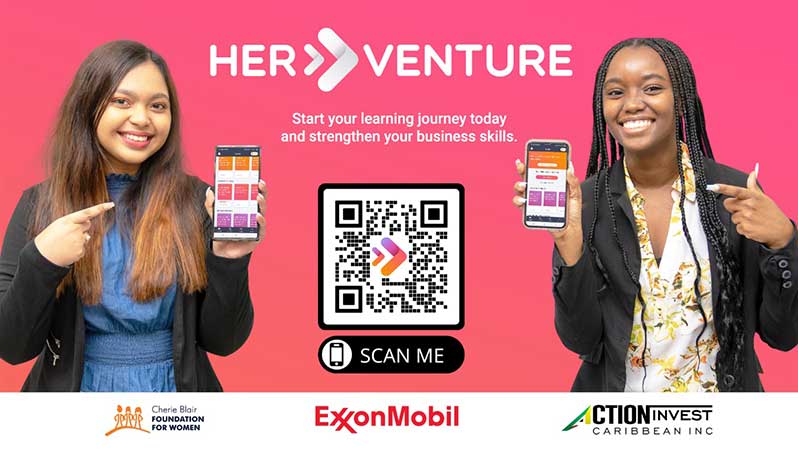 Developed by the Cherie Blair Foundation, and first launched in 2018, the HerVenture mobile learning app was developed specifically for women who own micro, small and medium-sized enterprises in low and middle-income countries. The app, which is currently available in Vietnam, Indonesia, Nigeria, Kenya, and South Africa, has supported over 41,000 women since its launch. The app is completely free of cost, and offers essential business training and support on-the-go. It features nine learning tracks on a range of topics, including how to launch a business, access financing, expand market access and to get into the e-commerce business.

Implementation of the initiative will be done by ActionINVEST Caribbean Inc.
“The HerVenture app will deliver business education and support that will empower thousands of female entrepreneurs to learn, earn and contribute more.

My message to my fellow female entrepreneurs is to download and start using the HerVenture app, and to be assured that our team at ActionINVEST is here to support you in every step of the way,” said Davitri Doerga, Chief Executive Officer (CEO) of ActionINVEST Caribbean Inc.

During remarks at the ceremony, Scott conveyed her organisation’s elation at being able to bring the app to Guyana. She thanked the ExxonMobil Foundation for making it all possible by providing the critical funding.

“We are delighted to bring our flagship app to Guyana. By partnering with corporates and their foundations like ExxonMobil Foundation, and expert local organisations like ActionINVEST Caribbean Inc., we can support huge numbers of women entrepreneurs to fulfil their potential and make progress towards our shared goal of closing the gender gap in economic participation,” Scott said.

Meanwhile, making remarks on behalf of ExxonMobil Guyana was the company’s Community Relations Manager, Suzanne De Abreu, who spoke at length of Exxon’s own commitment to investing in women’s economic empowerment.

“We know from empirical research that when women move forward, the world moves with them. We believe investing in women is not just a nice thing to do as a corporate social responsibility activity; it is the right thing to do from a business perspective. As a global energy company, we succeed, and are profitable when nations and communities are prosperous, and women are key drivers of that prosperity,” De Abreu said.

Also commending the great benefits that this new initiative will bring to Guyanese women was Minister Persaud, who noted that women are natural leaders, and as such must be given the proper tools to ensure that they are empowered.
“We believe that in order to see the full potential of women, we must place not only the tools in their hands, but also create an enabling environment for them to establish all that they can be and develop and express their fullest potential,” she commented.

Minister Persaud highlighted that the app and initiative complement each other, and will be able to work in tandem with several women empowerment and development initiatives that her ministry has, particularly the recently launched Women Innovation and Investment Network (WIIN).

The WIIN launched its own app, and opened a new business incubator last month. Minister Persaud noted that the WIIN initiative has already impacted thousands of lives, not only the women involved in it, but persons in their households and communities. Minister Persaud noted that the app will help to build on certain aspects of the WIIN programme, including having the female entrepreneurs complete their business proposals.