A deadly gun battle between police and the men suspected of assassinating Haiti’s President Jovenel Moïse has been raging in Port-au-Prince.

Police chief Léon Charles said four suspects had been killed and two detained but some remained at large and a manhunt was still under way.

“They will be killed or captured,” the police chief said.

Mr Moïse, 53, was fatally shot and his wife was injured when attackers stormed their home early on Wednesday.

“We blocked [the suspects] en route as they left the scene of the crime,” he told a news conference. “Since then, we have been battling with them.”

Officials say the suspects are well armed and took three police officers hostage. The three have since been freed.

Mr Charles urged residents to stay indoors for their own safety.

Haiti’s ambassador to the US, Bocchit Edmond, later said that more than 20 “mercenaries” had been arrested.

Brazen attack
The acting prime minister, Claude Joseph, has described Haiti as being “in shock” after the killing of Mr Moïse.

Heavily armed assassins stormed the president’s home in the hills above Port-au-Prince at around 01:00 local time (05:00 GMT) on Wednesday.

The president’s office and bedroom were ransacked and he was found lying on his back, covered in blood, the magistrate said.

First Lady Martine Moïse, 47, has been flown to Florida where she is said to be in a critical but stable condition.

Mr Destin said that Jomarlie had survived by hiding in her brother’s room, while two domestic staff members had been tied up by the attackers. 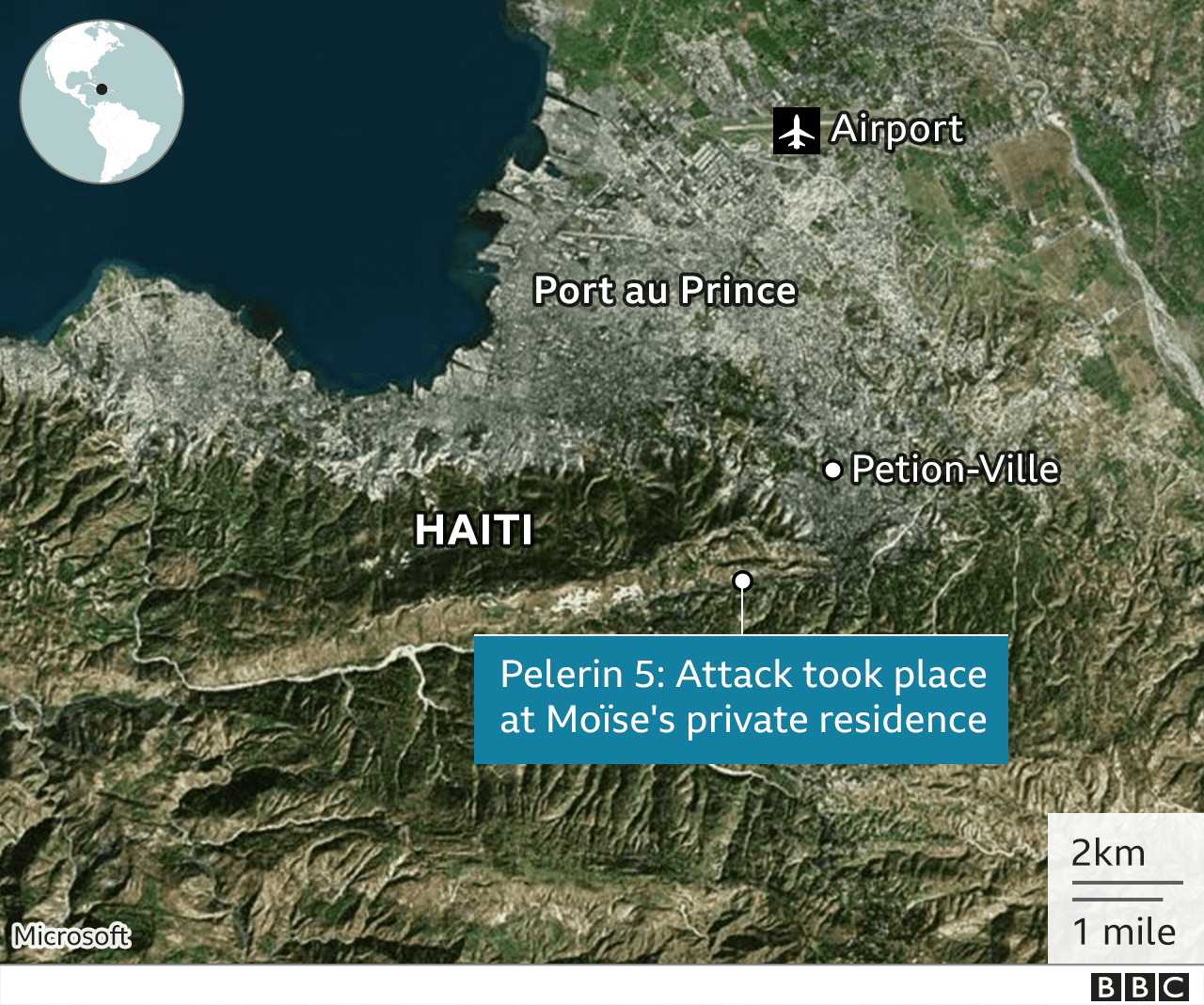 What do we know about the gunmen?
Police chief Charles gave no further details of the attackers or what their motive may have been.

Ambassador Edmond told the NTN24 channel: “They are mercenaries; they were paid for this job of coming to assassinate the president and we hope that they will reveal for whom it was they were working.”

He said he believed more than 20 people had been detained but added: “We’re continuing with the search so we get them all.”

Mr Joseph had earlier said the attackers were “foreigners who spoke English and Spanish”. Haiti’s official languages are Creole and French. Haiti’s communications minister later said there were Haitians among the suspects.

Video released after the shooting purports to show heavily armed men dressed in black outside the residence shouting in English: “DEA [US Drug Enforcement Administration] operations, everybody stay down!”

Mr Edmond said that while the attackers had disguised themselves as US drugs agents, he believed there was “no way” they really were US agents.

Streets deserted amid fear
Haitians mostly heeded the call by the interim prime minister to remain calm and stay indoors.

Mr Joseph has declared a two-week state of emergency, which allows for the banning of gatherings and use of the military for police roles, along with other extensions of executive powers.

The UN Security Council is set to hold a closed-door meeting later on Thursday. It has condemned the assassination, calling on all parties to remain calm and avoid further instability.

Rival claims
Even before President Moïse’s assassination, the situation in Haiti was marked by instability and there had been widespread protests demanding his resignation.

Parliamentary elections should have been held in October 2019 but disputes delayed them, meaning Mr Moïse had been ruling by decree.

During his four years in office, the president had six prime ministers and on Monday, a day before he was killed, he had nominated a seventh, Ariel Henry.

But Mr Henry had not yet been sworn in, leaving his predecessor, Claude Joseph, in charge.

Uncertainty about who should now govern the country is rife.

Mr Joseph has said he will take control until elections can be held. But in an interview with Le Nouvelliste on Wednesday, Mr Henry insisted he and not Mr Joseph was the prime minister.

Haiti’s constitution says the president of the Supreme Court should take over in the event of a presidential vacancy. However, Chief Justice René Sylvestre died of Covid-19 weeks ago.

The US said it believed elections should go ahead this year, to bring about a peaceful transfer of power.