IT started with the late, then Minister of Education Deryck Bernard in 1992, inspired by the ‘Shadow of the Jaguar’ and materialised in 2017 after consultations with the Finance Minister, the Hon. Winston Jordan. The lobby required several documents arguing the case that the management of talent and creativity had already led to employment, though stymied by a lack of knowledge, awareness and compounded by misconceived official biases. It is necessary to emphasise that the citizenry that falls under the heading of ‘Cultural Industries’ (CI) are not a collection of hobbyists or promoters with part-time involvement in what they do.

Rather, any external occupations attached to what they do, are supplementing the economic restrictions imposed by the inherent administrative fossilised loyalty to what business constitutes as, ‘only that’ inherited from our colonial past, with no concept vision that independent nations need to expand their economic threshold.

Perhaps in asking to participate in guiding the objectives of and for the subvention, which I was not allowed to be part of, I should have requested that it was in the first context be transferred to whatever entity manages small and medium businesses; or in the second context, that an informed committee is developed to relate to the Department of Culture guided by eligible persons who are themselves practitioners of existing categories of Cultural Industries, to help establish the awareness for and of CI; to which with the former, the Small Business Bureau, comes to mind. But the errors of the past can be reflected upon as unfortunate, but will most likely need another lobby to remedy. 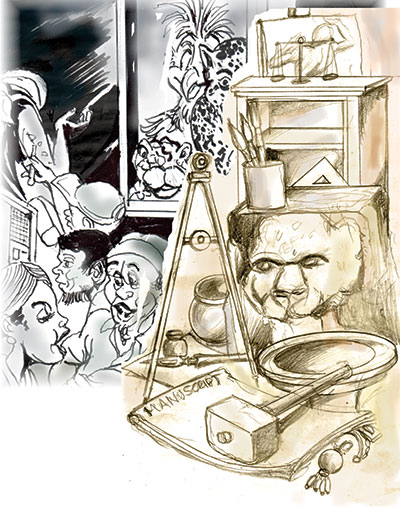 The definition of the humanity involved in cultural industries in every article needs to be defined, because as the saying goes, that to every innovative effort, idea or concept expressed, there are 1000 pointless critics, that will ignore the precedents surrounding them, who as the Frank Sinatra song ‘That’s Life’ implies, “some people get their kicks stomping on a dream.” Creative industries are restricted to those who conceive of original or unorthodox ideas in a variety of expressions and proceed to develop custom expressions, whether, it be design, manuscript, playwrights’, music sheet, songs, recipe, medical or industrial innovation, inherited healing formula, Cultural Dolls, video-board-games, Graphic arts, sculpture etc.

Architectural and furniture design with distinctive originality; that can pass the test to acquire by merit, the prestigious but enviously not celebrated- Intellectual Property Rights, translated- patent or copyright. Thus, the essence of the lobby is intended to support and help to develop the uncharted potential of that specifically creative or innovative niche of businesses. I had proposed an exhibition by applicants for the benefit of parliament to coincide with the first expression of the ‘Subvention,’ but our politics cancelled that. Thus, I presume there is still work to be done towards affirming a catalogue of this section of small businesses, the Small Business Bureau, of which I’m a member, had begun this process; how far it’s gone, I’m not sure.

From what we witness, experience and understand, most of our political and ethnic tensions are riveted on income-based situations, thus, even with oil, the challenge to escape the decline of mass employment old industries will increase, to ignore the other realities of skills and talents, and the observation of what other nations have done to employ, then market to other shores. Can you imagine that ‘Break Dance’ is a niche industry? With a global market projection, it’s now part– in concept — and imported methodology of interpretive dance and witnessed in some fitness programmes. The current subvention is still with the Ministry of sports and culture and is an extension-plus of the Hallmark 2017-19 initiatives, which the team had put together.

But there needs to be a meeting of talent and industry minds across the national landscape to determine how to identify potential and economic viability, where would markets lie and collaboration possibly exist, and also to determine the not-so-favourable realisation, of ‘ you’re recreating the wheel.’ But that should not halt the recognition of the solitary innovative aspirations of citizens, to bridge the gap with invisibility and replace the void since independence with “let’s talk, lemme hear you” on a safe platform of course.

I must add for those few Guyanese who use the Library of Congress in Washington to copyright their IPR items, that due to COVID-19, a new requirement is in place. All work published or in manuscript form (for writers, artists, designers etc.) are required to file with costs on the relevant forms as a PDF item, of said unpublished work, then must be accompanied for published work a hard copy. I use FEDEX- an expensive but reliable process. We must understand that as long as we remain in the cultural consciousness of Guyanese, ours is a continuous struggle.

Barrington Braithwaite
Frontera plugs US$19M into CGX
Guyana called ‘Good Samaritan’ as supplies reach St. Vincent
Local trade not impacted by volcanic eruptions
‘I am stronger than my trials’
Over 79,000 vaccinated against COVID-19
View All