RESIDENTS of Newtown, Georgetown, are expressing outrage at the deplorable state of one of the streets, which they alleged were caused by a contractor’s sloppy work.
Republic Street, which is used as an access road by persons in the area, has been in an egregious state for almost a year now, with potholes causing severe inconvenience to residents of the area.
When this newspaper visited Republic Street, residents explained that the massive potholes — much like craters — in the road were especially irksome during the rainy season, as they would fill with water and prevent some persons in the area from accessing their houses by foot.
This, of course, poses a challenge, since taxi drivers and motor vehicle drivers avoid the road, due to the damage it causes to their vehicles.
“Right up the road deh, got a vulcanising shop,” a resident, who declined to give his name, explained, noting that “… in order to get there, people got to be damaging their vehicles, then fuh go and get it repair.” 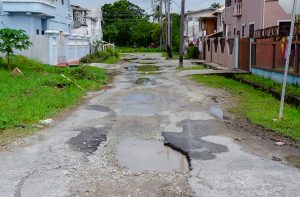 Nicholas Richardson, manager of the Car Clinic in Newtown, stated that previous reports have been made to the relevant authorities and that repairs to the road were expected to commence soon, but efforts to repair the road have not yet been seen.
“Long, long the road deh so,” one resident, who gave his name as “Ryan”, told this newspaper, in a brief interview on Monday. “Since under the Coalition Government. GWI bring somebody come to do construction work and they do a set of nonsense, and by time they finished, the road left just so.”
Ryan, who does vehicular repairs at the Car Clinic, lamented that the condition of the road made it difficult for the business to “get work”. “People come to fix up their vehicle, and they don’t want to come in the street. Some of them watch it and drive away. It’s hard for we to earn money,” he said.

He further added that business has been hard as well for the enterprise, as customers complain of having to wash their cars, and then having to navigate the deteriorated road in order to leave.
“You come to get your car wash, and then what happen when you driving back out the street? It dirty again,” he said.
“The people finish construction, and dump the waste in the drains. Now when it rain, the water fulling up the drain and flooding the road,” another frustrated resident complained. “We never had that [problem] before.”
Deputy Mayor of the City of Georgetown, Alfred Mentore, claimed that although the Mayor and City Council is aware of the issue affecting residents, repairs to the road were out of their remit. “The contractor was meant to dig up, install and repair the roads,” he said on Tuesday. The Guyana Chronicle understands that the contract awarded to the contractor was terminated, allegedly due to unsatisfactory performance. Efforts by this newspaper to contact the contractor proved futile.